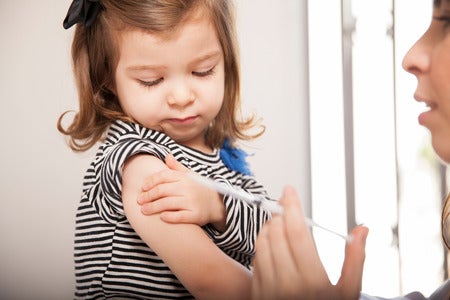 New Canadian research has found that giving preschoolers with asthma the influenza shot could help improve their response to asthma treatment after an attack and reduce the risk of hospitalization.

Carried out by researchers at the Université de Montréal-affiliated CHU Sainte-Justine children’s hospital and McGill University, the research is based on the national DOORWAY (Determinants Of Oral Corticosteroid Responsiveness in Wheezing Asthmatic Youth) study, which was conducted by the team between 2011 and 2013.

The DOORWAY study looked at nearly 1,000 children who were treated for moderate or severe asthma attacks, with researchers taking nose swabs to see if the children also had the flu or other respiratory viruses when they came to the emergency room.

The results showed that almost two-thirds of the children had the flu or other respiratory viruses, which appeared to affect how well the children responded to asthma treatment.

The team found that when the children with respiratory viruses were given the standard treatments for their asthma attack (oral corticosteroids and inhaled bronchodilators), 20 percent did not respond to treatment and most of those required hospitalization.

Those who had influenza or parainfluenza also had a 37 percent or more chance of not responding to treatment, compared to 13 percent for children who didn’t have a virus.

There was some good news however, with the researchers finding that children who had strains of human rhinoviruses (HRVs), which is the usual cause of the common cold, still responded well to asthma treatments.

The researchers described the finding as reassuring, as HRVs are the most frequent trigger of asthma attacks which require a visit to ER.

“This is the first time we’ve been able to disentangle the risk of non-response to asthma treatment with the presence of specific viruses, specifically, influenza and rhinovirus,” commented one of the study’s co-authors, Caroline Quach. “The more than 20-percent higher absolute risk of treatment failure in flu cases is very significant.”

Study co-author Francine Ducharme added, “We now know that if these kids get the flu the risks are very high that emergency treatment for an asthma attack will fail. Instead of having an overall 17-percent risk of treatment failure, with flu their risk rises to almost 40 percent.”

“Influenza is the only respiratory virus that is vaccine-preventable. Granted, it’s at best only 50-percent efficacious, but that’s no reason for kids with asthma not to get vaccinated yearly, in the fall, before flu season starts. We can start as young as six months of age,” said Quach.

“Everybody who has an asthmatic child should hear that influenza is bad news; the child might have an attack that needs hospitalization,” Quach explained.

The research will be published in the journal Pediatrics. JB