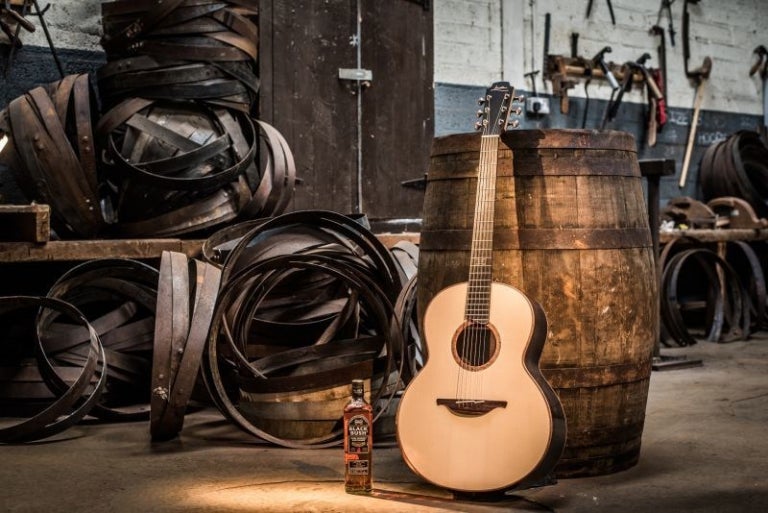 To coincide with Father’s Day, the world’s oldest licensed whiskey distillery has collaborated with an acoustic guitar manufacturer to create a limited-edition series of guitars made with whiskey barrels and copper used to distill their amber liquid.

It took 100 hours to design and build The Bushmills x Lowden Black Bush Edition guitar, which was a collaborative effort between the distillery’s master distiller, a master luthier and Northern Irish singer-songwriter Foy Vance.

The rest of the body is made with African Blackwood and Alpine Spruce, described as some of the best tone woods in the guitar world. Oloroso sherry casks were also used on the back inlay and the 12th fret inlay, as a subtle nod to the Bushmills Black Bush, an Irish whiskey blend matured in Oloroso sherry casks.

“I was fascinated with the copper from the original pot stills at The Old Bushmills Distillery. Not only is it a beautiful metal to work with but it’s amazing to think this material has had whiskey flowing over it for hundreds of years,” said master luthier George Lowden. “Likewise, the sherry casks are literally steeped in whiskey-making heritage and used throughout to perfectly complement the other tone woods.”

It’s the second collaboration for the whiskey distillery and the guitar-maker. Unlike last year’s guitar, however, this is the first to use copper from pot stills.

Vance’s input as a musician was also solicited to help finalize the instrument’s final look and sound.

Seychelles latest to look at banning plastic straws across their islands