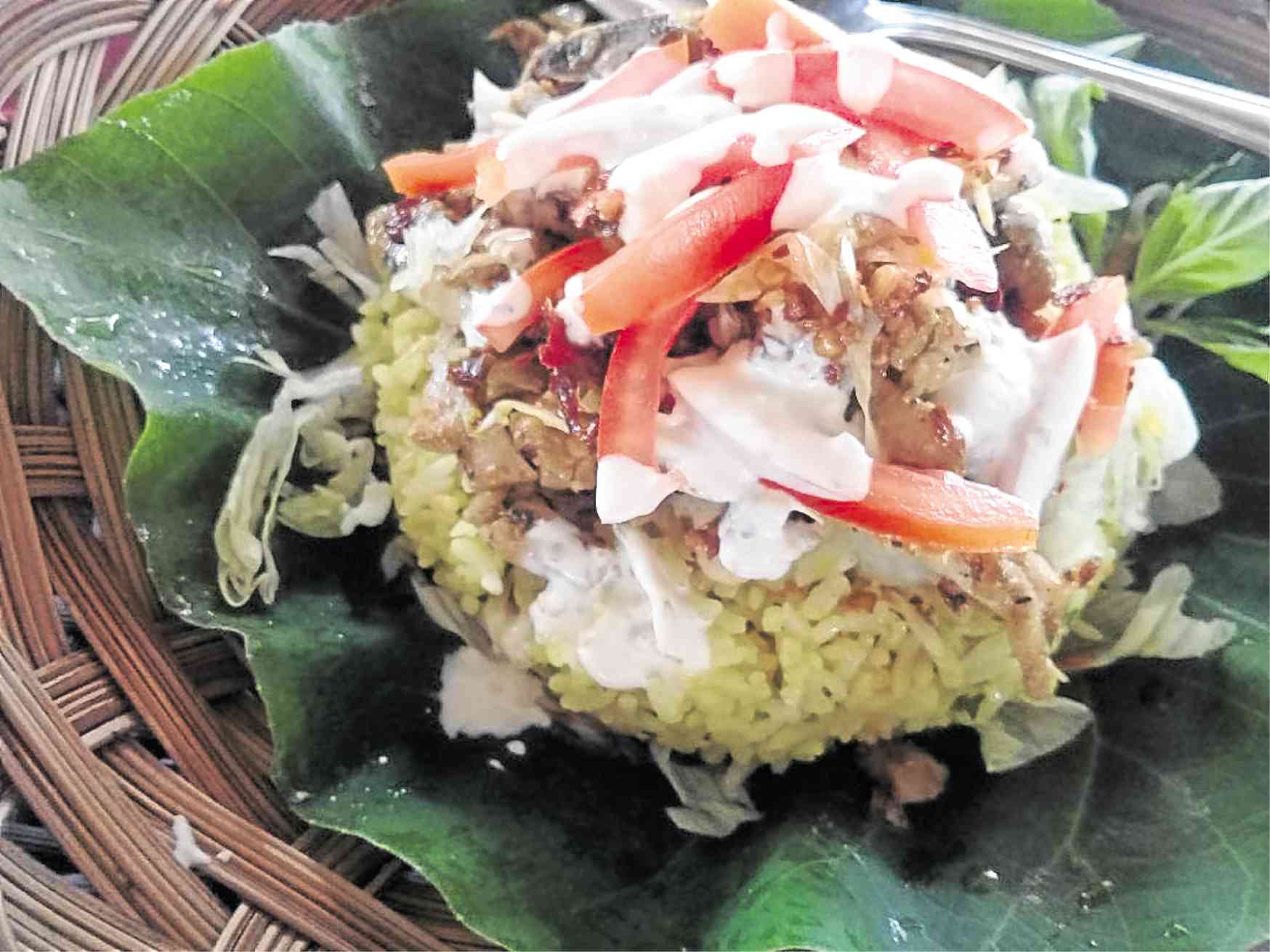 The first Moro dish I tasted was a Tausug piyanggang manok. It was cooked by a friend who had married a German, whose family is really from Jolo.

It was a strange but wonderful chicken with yellow color, like the curry we cook at home, but this one had streaks of black. Much later, I learned how yellow came from the grated turmeric mixed with coconut milk, and the black from pamapa itum, a spice mix with burnt coconut meat.

Doing the book, “Philippine Cuisine: A Country’s Heritage,” was my second time to eat Tausug food, adding the kurma, a beef stew, and satti, grilled skewered beef and chicken with a tomato sauce, to my limited Moro cooking repertoire.

There was an opportunity to add to that list by traveling to Tagum, 55 km north of Davao City. Instead of a village that would make it a more authentic culinary experience, there was a beautiful former abaca plantation, the Hijo Resort, where the remnant of United States colonial rule was called Plantation House.

A white and green two-story structure, it reminded me of the houses built for Americans in Olongapo, Zambales. I live in an area in Quezon City where the former Joint US Military Assistance Group (JUSMAG)’s green-and-white houses still stand.

A taste of Mindanao

We were in Tagum to sample “Tilaw Mindanaw,” a taste of Mindanao, facilitated by Enderun Colleges’ Tricia Tensuan. The food, she said, is from the Kagan, (sometimes referred to as Kalagan), an ethnolinguistic group in Davao that turned Islam.

According to Macario D. Tiu in his book “Davao Cuisine: Recipes of the Ten Tribes of Davao City” (2014, Philippine Women’s College of Davao), the Kagans and the Maguindanaos formed an alliance to fight the Spanish, which explains why the Kagans converted to Islam.

Hijo Resort general manager Kris Porio, an Enderun alumnus, and F&B and resort manager Lani Sta. Maria brought us to The Spot Halal restaurant, which seemed the proper venue to have our lunch.

Halal generally means what food the Qu’ran or the Muslim holy book allows to be eaten.
Sta. Maria told me that the kitchen is separate from the main resort kitchen to ensure that the food preparation is truly halal.

Even in hot weather, the Tausug tiyula itum, beef soup with pamapa itum, was welcoming and very good.

I still liked the Tausug pyanggang (grilled chicken) though not as tasty as the first time I had it.

Many of the Moro groups do the Southeast Asian yellow rice, the color from turmeric mixed in with the grain. We were served what Kagan calls sinagpuna.

The seas around the province abound with fish, and we had grilled kagai or tuna from the fatty belly part. There was salad of cucumber, a Badjao dish called maras flavored with bulad or dried fish.

Perhaps the most beautiful presentation was the bungkos, which literally means pouch. It is food from the Mandaya, one of the ethnolinguistic groups in Mindanao. The wrapper is from the alum tree leaf, but the food is oyster mushroom called ligpus that is steamed with lemon grass and turmeric leaf—emitting such wonderful fragrance when the leaf is opened.

The last dish was a rice cake formed into balls called putli mandi, similar to palitaw. It was taken with tahid coffee, a combination of ground coffee beans with ground toasted rice or corn.

Like the story about tsokolate e (espeso, thick) and tsokolate a (aguado, or watered down), the tahid has its own cultural history. The ideal combination is 1 coffee to 2 ground rice or corn. If a guest is given a combination of 1:3 or 1:4, the guest is not considered important.

The Spot being a certified halal restaurant means nothing that is haram or forbidden is allowed within its premises. Alcoholic drinks are prohibited. Porio and Sta. Maria said it is sometimes difficult to explain to guests about this, especially since the dining place is private, quiet, set amidst a fish pond.

But Hijo Resort offers much more than good cooking (there is a main dining area beside the pool which serves a buffet of good local cooking). There is forest you can traverse above ground through a hanging bridge, where you can pose beside really ancient dau trees; a ground tour through electric cars where you meet monkeys and wild boars, a coconut plantation (mostly to export coco sugar) with perfectly aligned trees that were planted and cared for according to good agricultural practices; a banana plantation where the fruits are also processed for export; and a river tour.

You can swim or kayak in the usually calm, sea but I had to think twice, upon being told that hijo is the name for baby sharks. Porio assured me that baby sharks no longer visit after the coral reef was destroyed years back.

But then the resort is rebuilding the coral reef and Porio pointed to a bamboo enclosure way off the shore.

Maybe I should again visit and swim in the refreshing, clean sea water, before the reef fully recovers and draws the creatures the resort is named after.