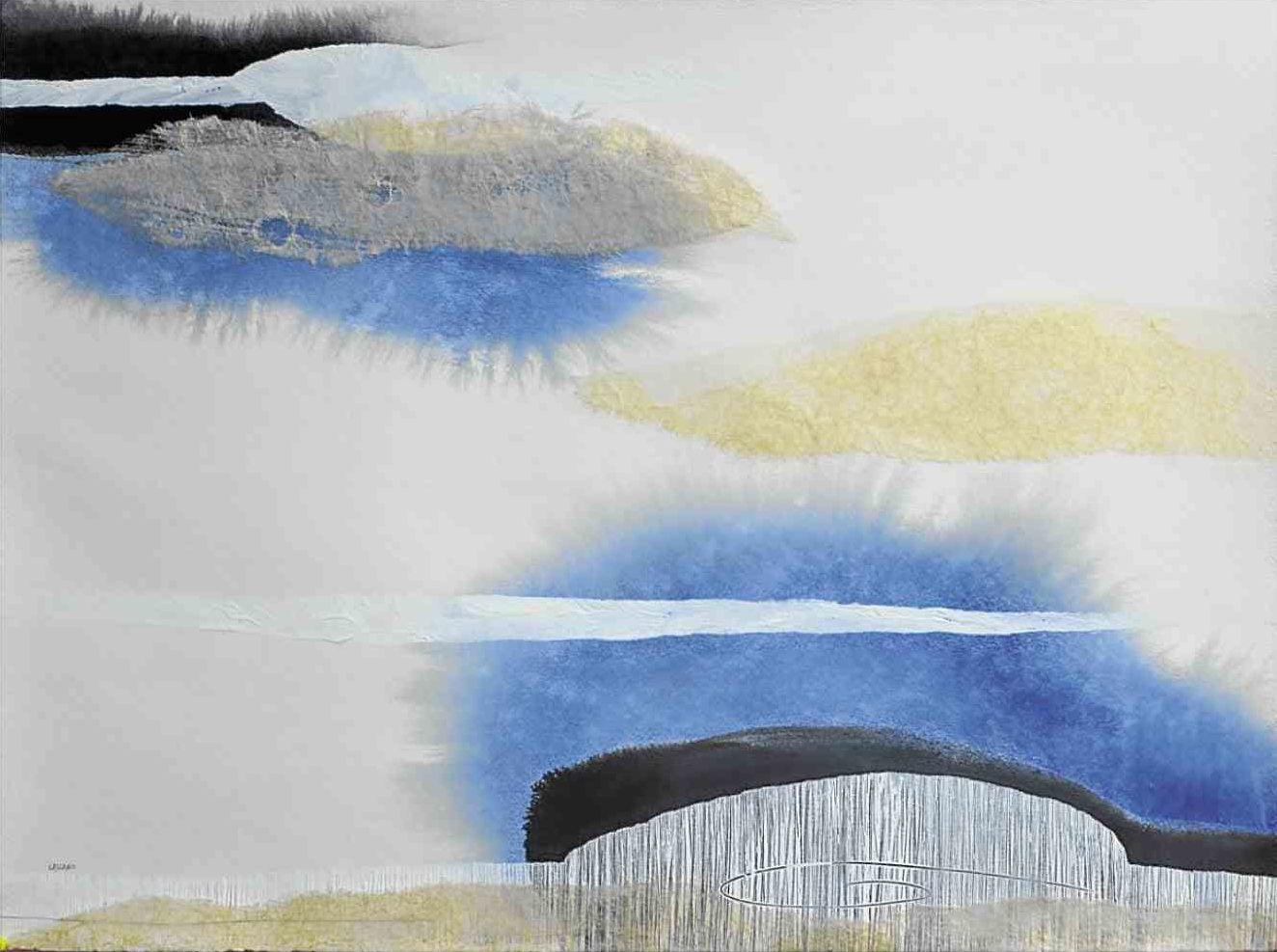 Rico Lascano’s ‘Spatium Divinae’ dances on the edge of evanescence

Many artists hog the pictorial space so tightly as to hardly leave any breathing space, driving the painting to a state of exhaustion by the sheer ceaseless manipulation and meandering of the plastic elements; so manic is their desire to display a technical skill. Alas, space cannot be owned by an artist like acreage, tilled and furrowed to yield a relentless harvest.

In his current exhibition at Altro Mondo Gallery, Rico Lascano presents his view of space, in a show titled “Spatium Divinae.” These recent works are his contemplative imaginings of Divine space, celestial space, in which the artist bids us enter deeply with no need for a florid invocation, lest it fades away into nothingness. To experience evanescence is to understand the mystery of visibility.

Lascano has always treated space with a kind of reverence, aware of its sanctity that demands respect, its enchantment and rapture unalloyed.

Indeed, Lascano’s works have always courted simplicity and order, albeit of a lyrical kind. The artist is seduced by the elusiveness of meaning, which may come as a flash of enlightenment, not unlike as in a haiku, which in fact Lascano has substantially mined, in partnership with his wife Chachu, who is herself a mean weaver of words—the couple exulting in a unity of nonimage and nonmeaning (for truth can slip away as instantly as the moment it is glimpsed).

One is aware, however, of Lascano’s craftsmanship, which is neither preening nor exhibitionist. Though no doubt, of a very high level, indeed, it is rather self-effacing, almost embarrassed to call attention to itself. But the viewer senses that despite the rather lofty realm to which he has now ascribed these recent works—not just cosmic space, but celestial space, where it is implied God Himself resides!—they have achieved their serene beauty and elegance, silence and solitude, through a sensitivity that is certainly unearthly, though the viewer can remain earthbound, rooted to the ground, but nonetheless with uplifted face, heavenwards, as he sees a renewed and intimate vision of skies and clouds, ripe with impending rain or emerging light, as though beckoning him toward a space he can invisibly enter.

Generally, Filipino male artists cringe at the thought of wearing their faith on their sleeve, but not until the likes of the late National Artist Vicente Manansala took on as his panata (vow) to paint a Crucifixion painting every Lenten season. So inspirational was the master’s affirmation of faith that we now have the annual Lenten “Kristo” exhibition, still running for over a decade, in fact,  with “chapters” in various parts of the country. This is truly a laudable expression of the faith of Filipino artists, who, willfully, notoriously, will not paint a subject to which they are lukewarm. In James 2: 18, we read: “I will show thee my faith by my works.”

Painting, then, is undeniably an artist’s act of prayer, a lifting up of one’s talent and skill—acknowledging a Higher Source Whom we call by whatever name: Dios, Allah, Bathala—that is the origin of the artist’s gift. As Ben Nicholson, the British abstractionist, once said” “Painting and religious experience are the same thing.”

Thomas Merton, writing on the subject of “Art and Spirituality,” shares that “Christian contemplation is not something esoteric or dangerous. It is simply the experience of God that is given to a soul purified by humility and faith.” Rico Lascano’s works in “Spatium Divinae,” with their irradiation of openness and sense of the Void, calm the disturbed waters of our contemporary existence. –CONTRIBUTED