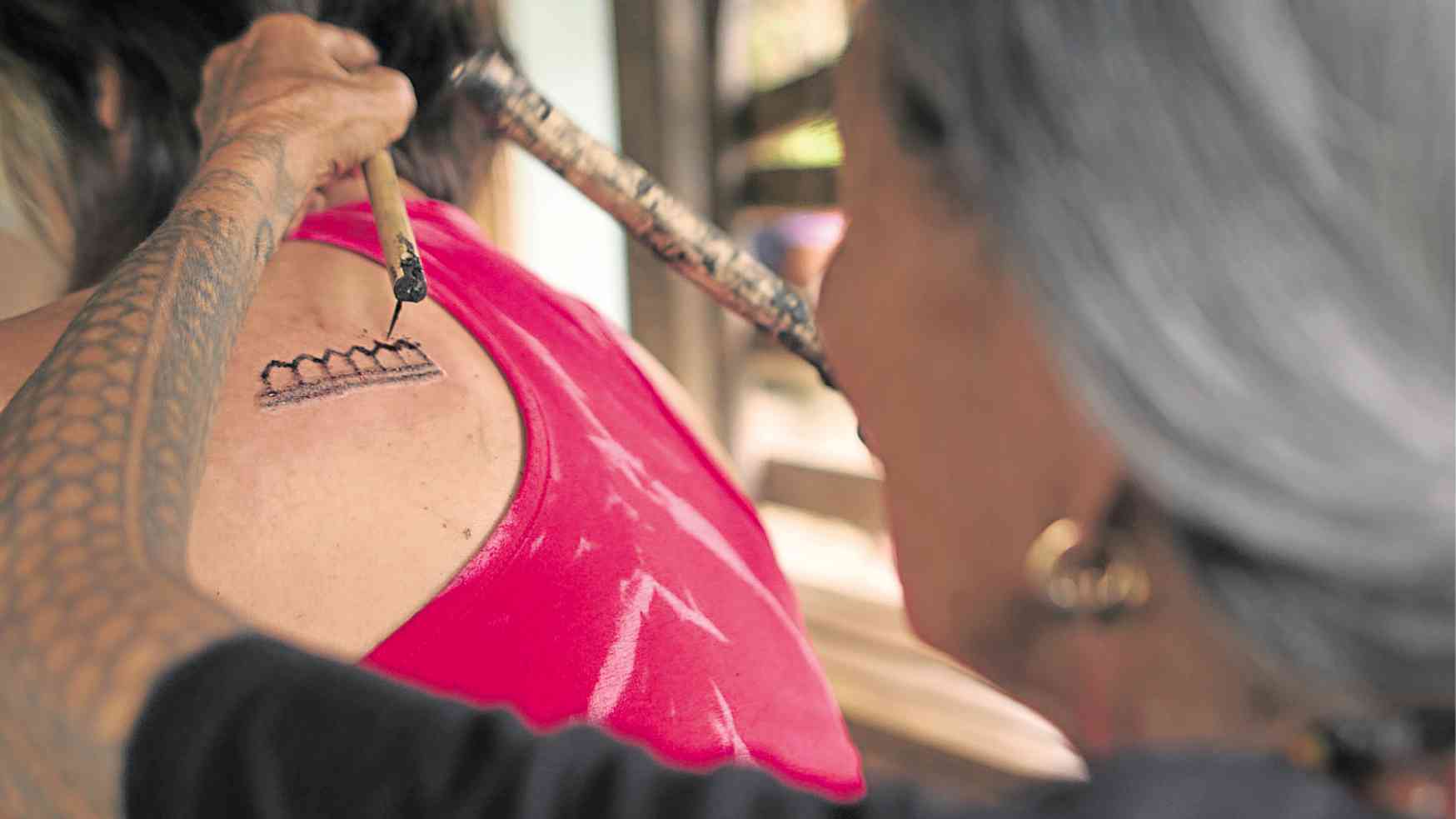 Whang-od uses charcoal as ink and calamansi thorns to puncture the skin.

The National Commission for Culture and the Arts (NCCA) is set to grant the revered “manwhatok” (tattooist) Apo Whang-od Oggay the 2018 Dangal ng Haraya Award for Intangible Cultural Heritage. The formal awarding ceremonies will take place at the Kalinga Capitol Plaza, Tabuk, Kalinga, on June 25, 5 p.m.

In a special resolution during its meeting last May 2 in Davao City, the NCCA board chaired by National Artist for Literature Virgilio Almario recognized Whang-od as one of the oldest living traditional whatok (tattoo) practitioners of the Kalinga community.

In the resolution, the NCCA recognizes Whang-od “as a living vessel of a traditional practice, [who] deserves honor and acknowledgement for her contributions, particularly by bringing to greater attention the indigenous practice of tattooing and Filipino culture in general.”

The local government of Kalinga also has formally expressed its support of the conferment of the 2018 Dangal ng Haraya on Whang Od.

Whang-od became a social-media sensation last year when netizens complained how she was “exploited” by the Center for International Trade Expositions and Missions (Citem), an agency under the Department of Trade and Industries.
Citem organized the Manila FAME trade fair of Philippine arts and crafts and invited Whang Od to Manila to demonstrate her art and tattoo several guests.

When she was seen dozing off, netizens protested how she must have been overworked by Citem despite being at least 100 years old.
Many netizens made references to the infamous 1904 St. Louis expo in the United States in which the American colonizers brought to North America indigenous people from the Philippines who later died because of the harsh climate.

But Whang-od’s relatives said she was not exploited by Citem and that she was dozing off because she could not understand the proceedings because she did not speak Filipino or English. They said she was simply bored.

Apo Whang-od has long been recognized and respected in her community as a master tattooist. Her practice started in her early adolescence. She has since tattooed elders, women, and warriors from her community in the traditional Kalinga practice—using charcoal as ink and calamansi thorns to puncture the skin.

Local and international tourists flock to her village in Buscalan to get inked with traditional Kalinga designs, especially her signature linear three-dot design, and witness the outstanding whatok techniques. She’s trying to pass on the craft to younger Kalingan women.

Apo Whang-od’s work as a manwhatok and her influence on the Filipino traditional arts scene, said cultural officials, have heightened awareness about the culture of the Kalinga community—their worldview, traditions and expressions.

Dangal ng Haraya is given to living Filipino artists, cultural workers, and historians, artistic or cultural groups, historical societies, institutions, foundations and councils, for outstanding achievements in relevant fields that have made an impact and significant contribution to Philippine culture and arts.

Through Dangal ng Haraya and its other institutional awards, NCCA seeks to uphold excellence in all artistic and cultural endeavors, encourage initiative and participation among groups and individuals, and recognize exemplary cultural programs that can serve as valuable examples to others.