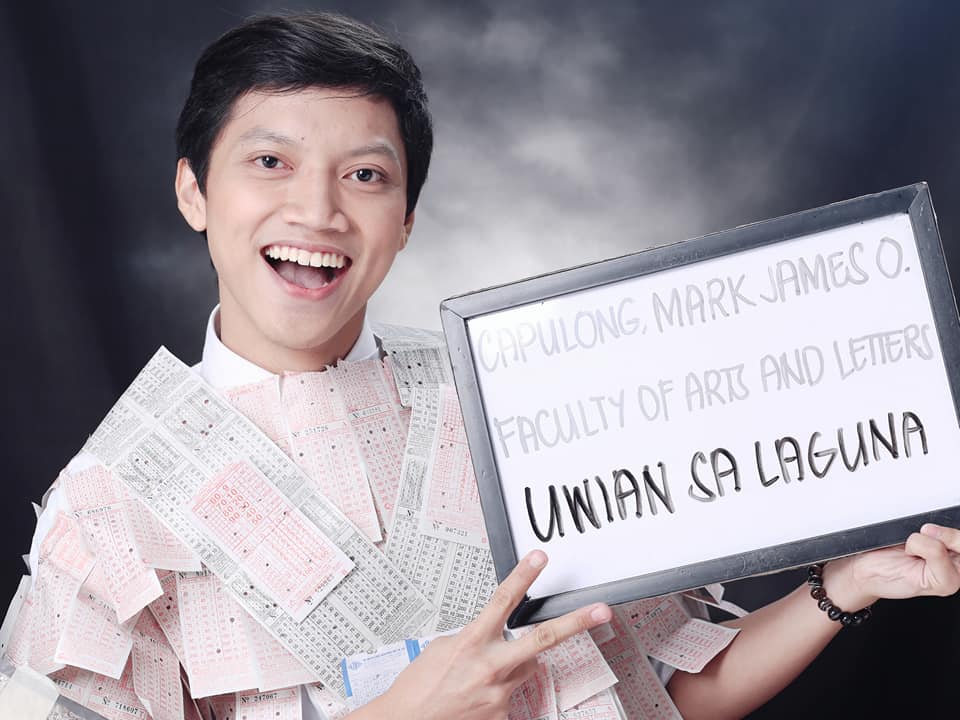 Life is all about the journey and not always about the destination, they say. But for a fresh University of Santo Tomas (UST) graduate who survived a lengthy and tiresome daily commute for four years, yet still finished college with latin honors, both the destination and the journey indeed matter, as the latter maybe coming literally.

When you’re stuck in traffic or dread the travel from work or school, just think of Mark James Operiano, who got through regular five-hour travel from his hometown in San Pedro City, Laguna, to UST in Sampaloc, Manila, and vice versa, for four  long years.

The 21-year-old Operiano made the rounds on social media after posting his graduation photos where he used as his toga the bus tickets he collected through four years of college commute.

In his Facebook post, Operiano shared that while graduating with flying colors was one huge recognition, surviving the “daunting” daily journey between San Pedro and Manila was even more fulfilling and rewarding. So when his graduation photos were about to be taken, he decided to use the bus tickets he gathered, instead of the typical graduation garment.

“I’m Mark, a Thomasian, and uwian ako from the South for 4 years!! All my college life I’ve been wanting to do this, so Team South and Team Uwian mag-ingay!!!!” he said in his post.

“Actually, the idea was inspired from graduating students who also went for being creative with their graduation pictorials, deviating from the usual formal norm. Before, the tickets usually accumulated in my bag, but after realizing that I can do the same with the said people, but using my bus tickets since no people have done it yet, I started collecting them and hiding them for safekeeping, until the time comes that I have to create that toga gown,” Operiano told INQUIRER.net.

Having been part of an OFW family, Operiano decided to forego renting a place near his school or staying in a dorm so he could attend to his responsibilities at home. His father works as an engineer in Saudi Arabia while his sister was a nurse in Abu Dhabi, UAE.

“From keeping the household in order to assisting in managing the finances, eventually I had the responsibility of leaving our home sound bago ako pumasok papunta ng UST. Aside from that is yung palaging kailangan ako ng mga kapatid ko para tulungan sila sa academic needs nila, and si mama when it comes to processing things that involves the use of technology… may tita akong nakatira lang malapit sa main na hindi na din makalakad at nasa kama lang, and since kami pinaka-malapit, naging responsibility na namin mag-attend sa needs niya,” he said.

But because of the commute that usually took three to five hours due to heavy traffic along SLEX, Operiano said buses became his “third home.” And for him, certain events made his trips worthwhile as it taught him patience, a sense of discipline, and time management.

“One time I had to endure traveling from Laguna to UST kahit na katatapos ko lang maoperahan because of appendicitis. I also had to go to school with crutches (saklay) dahil I had a bad fall and sprained my left ankle when I was running towards a moving bus. There was a time din na I had to rush si mama sa UST hospital dahil nung kasama ko siya sa bus papasok, she suddenly suffered extreme pains sa abdomen and chest niya which caused me to be absent on one of my classes.”

“I had classes which started as early as 7AM and ended as late as 9PM. Aggravating the situation is that I had to excel on my academics, and at the same time tend to the needs of my family, so most of the time I am deprived of sleep and I frequently skipped meals… Worse is yung ang haba haba ng binyahe mo tapos malalaman mo na lang na hindi papasok ang prof, literal na mas matagal pa inilagi mo sa bus kaysa sa mismong school.” he continued.

But his journey is not stopping in Manila. This time, he is set to take to the skies.

Operiano will be flying to Europe this October to work as an English language instructor in Madrid, Spain.

Later, he plans to return to UST to enter law school.

Operiano may have stopped collecting bus tickets but he said that he won’t stop collecting life experiences and lessons.

“Kung sino man ako at kung ano man ang natatamasa ko ngayon, it’s because of all the hardships I’ve encountered and hurdled, as well as the people who have inspired and been there for me in those times of adversities. If there would be a major obstacle coming on my way, I would always remind myself of the gravity of the challenges I overcame and from which I emerged victorious,” Operiano said. /cbb