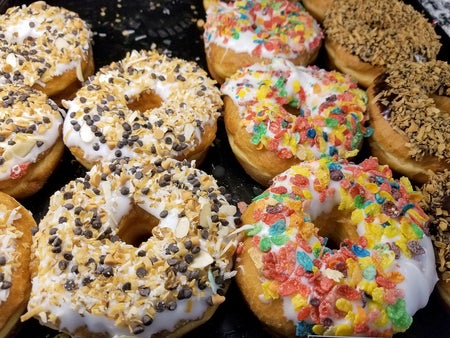 Photos of a donut shop employee resting her bare feet on a crate containing donuts made the rounds in social media over the weekend — a spectacle that was, for most of the netizens, seemed quite disturbing.

The netizen, a certain Alfred, took to Twitter last Saturday, June 9, to share photos of the unnamed female employee who was sitting behind the counter of a local Mister Donut branch.

The branch was not named, but the pictures showed the employee sitting on her chair while resting her feet on top of an open container-drawer of donuts, as she texted away on her phone.

Despite the nature of the image, the netizen still managed to make light of the situation, as the netizen wrote, “Bagong flavor ng donut.” (A new flavor of donut.)

The netizen’s photos went viral and have since racked up 11,000 favorites on Twitter, and with almost 3,000 people retweeting the post in just two days, as of this writing.

The clamor seemed to have reached the management of the donut franchise immediately. The company released a statement on its Facebook page regarding the issue on the same day, June 9, at 10:55 p.m.

“It has been brought to our attention that a post showing mishandling of our product is currently circulating the internet,” began the statement. “We appreciate your concern about this matter and we would like to assure the public that the management is already doing an investigation and is coordinating with the concerned individual.”

“At Mister Donut, quality and safety of our products is our top priority. Any deviation from our standard processes and quality measures will be dealt with utmost importance,” the company stressed.

The management also gave its word that it is taking steps to prevent similar incidents in the future: “Rest assured that we are doing everything we can to ensure that this incident will not happen again in any of our stores.” JB