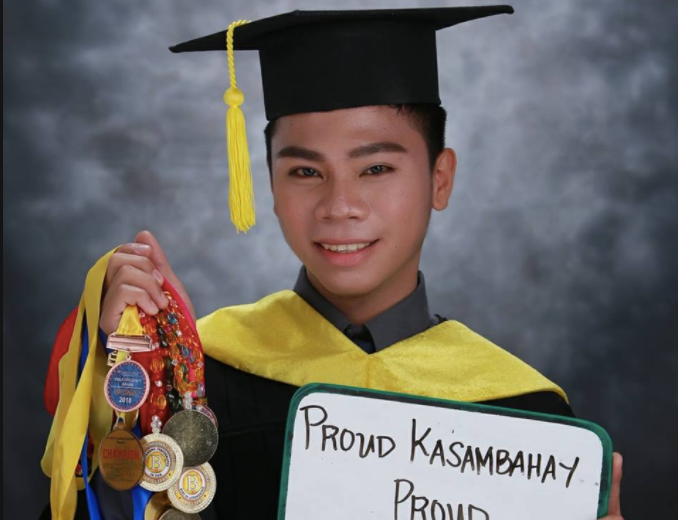 Jarel Barcelona Tadio of Tuguegarao, Cagayan first started to dream for himself when he realized his life was different from the  comfortable lives his peers had. But his dream was simple: to give his family a better life and improve their living status, one that has been in his wishes since he was just a kid.

When Tadio was in elementary, he remembered his classmates talking about their dream professions. And when he was asked what he wanted to be when he grew up, all he could say was, “Wala. Wala akong gustong maging in the future. Basta mai-ayos ko lang buhay nila mama, ok na ako.”

(Nothing. I have nothing I want for the future, except to better the life of my mom and family. That would be OK for me.)

The triumphant face of this fresh graduate of the Cagayan State University, a proud bearer of a degree in hospitality industry management, shows that he’s more than ready to face and take on the world. But behind this picture of Tadio in a toga was also a reality that none of it all came easy.

(One day my mother spoke to me and said, “My son, we will try to support your studies, we’ll find a way.”)

He was just 15 then when he started to work to help around in the family. Upon graduating high school, Tadio shared that he worked in the catering services as an on-call crew: “Sobrang liit ng sweldo at kulang talaga.” (The salary was too low and really was not enough.)

(I applied to work as a maid. Yes, a maid, a nanny. A househelp. But I hold my head up high about my job. It is noble. And what’s delightful about it is my lodging is free, food is free, snacks are free, TV is free, cable is free. Even Wi-Fi is free. Where else would you want to be?)

It was in his first year of working as a maid when he had a reckoning: “One afternoon, when I was doing my chores, I suddenly asked myself: ‘Jarel, forever ka na bang kasambahay? Forever nalang bang ganito?‘” (Jarel, will you forever be a helper? Will it be like this forever?)

These questions made Tadio realize why it was important to dream, to have an education. So despite the difficulty of his circumstances, he decided to become a working student. Whatever his awareness of his situation was, moping around and feeling sorry for himself weren’t in his list.

(It’s hard to be a working student. You study in the morning and work during the afternoon and evening. Aside from that, there are people who seem to be unhappy to see you striving to achieve your dream.)

He spoke of being discriminated, belittled and judged for his financial misfortune by schoolmates, as well as by his own relatives who would talk behind his back. But regardless of it all, Tadio remained resilient: “People may talk behind us, people may not believe in us and people may drag us down but do not be shaken, we do not exist for them; because we live for the people who have faith in us – because this life is for our family.”

This is why despite the presence of a few who did not have faith in him, Tadio still triumphed and dedicated his success to his parents, both of whom have given and sacrificed so much for their family.

(Ma, Pa, this is the fruit of every hardship, of every sleepless night, of every sacrifice, of every difficulty, and of every tear. Your son is now a graduate, and this is because you took care of me, because you believed in my ability to finish — with faith in God — what I started.)

As for his promise of a better life for his family, he obviously hasn’t forgotten, as he said, “Huwag kayo mag alala mama papa, etong speech at yung diploma muna ang tanggapin nyo, pauna palang to, sa susunod may sobre na po.”

(Don’t worry mama and papa. Please accept first this speech and diploma. This is just the start. Next time, there will already be an envelope.) JB