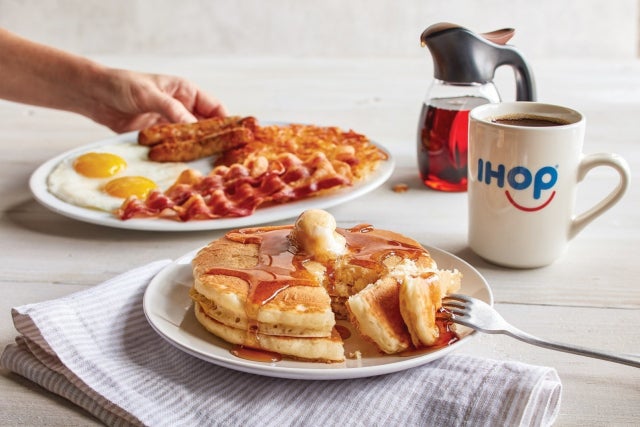 The chain's name, International House of Pancakes, is rooted in their calorie-laden breakfast standards -- pancakes, waffles and french toast -- but IHOP said last week that it was changing its last initial to "B" in a rebranding exercise. © IHOP

Few expected it to be burgers.

After tantalizing fans for a week, IHOP, the ubiquitous blue-roofed American chain which promises pancakes 24 hours a day, said Monday it was changing its name to IHOb —International House of Burgers — in a ploy to expand its market image beyond breakfast.

The move sent pancake breakfast lovers into a furor and sparked snarky broadsides from rivals already deeply rooted in the hamburger business.

“The world is spiraling out of control and I can’t understand why IHOP would force us to deal with more unwelcome change,” said one Twitter user.

“Why is ihop going thru a mid-life crisis,” tweeted another.

The venerable chain, 60 years old this year, has long offered sandwiches and burgers across its nearly 1,800 locations.

But the name — International House of Pancakes — has always been rooted in their calorie-laden breakfast standards: pancakes, waffles and french toast, often smothered in syrup and whipped cream.

IHOP baited the public a week ago saying it was changing its last initial to “B” in a rebranding exercise.

With over 30,000 replies to their announcement on Twitter, guesses spanned from “bacon” to “bananas”, but the consensus seemed to be “breakfast”.

Revealing “burgers” on Monday, the company said it was a temporary change to celebrate the release of its new “Ultimate Steakburgers” menu category.

“We are definitely going to be IHOP, but we want to convey that we are taking our burgers as seriously as our pancakes,” Darren Rebelez, president of IHOP, told CNN.

“Burgers are a quintessential, American menu item so it makes perfect sense that IHOP … would go over the top to create a delicious line-up of quality burgers,” said Nevielle Panthaky, the chain’s culinary chief.

Whataburger tweeted: “As much as we love our pancakes, we’d never change our name to Whatapancake.”

“Not really afraid of the burgers from a place that decided pancakes were too hard,” tweeted Wendy’s, another popular burger restaurant.

Some dismayed fans just could not understand the need for it.

“@IHOb the b stands for blasphemy,” tweeted one.

“I’m okay with the name change as long as you don’t forget your roots,” said another.

DineEquity, the company that owns IHOP/IHOb and also the Applebee’s chain, sought to assure customers that nothing had really changed.