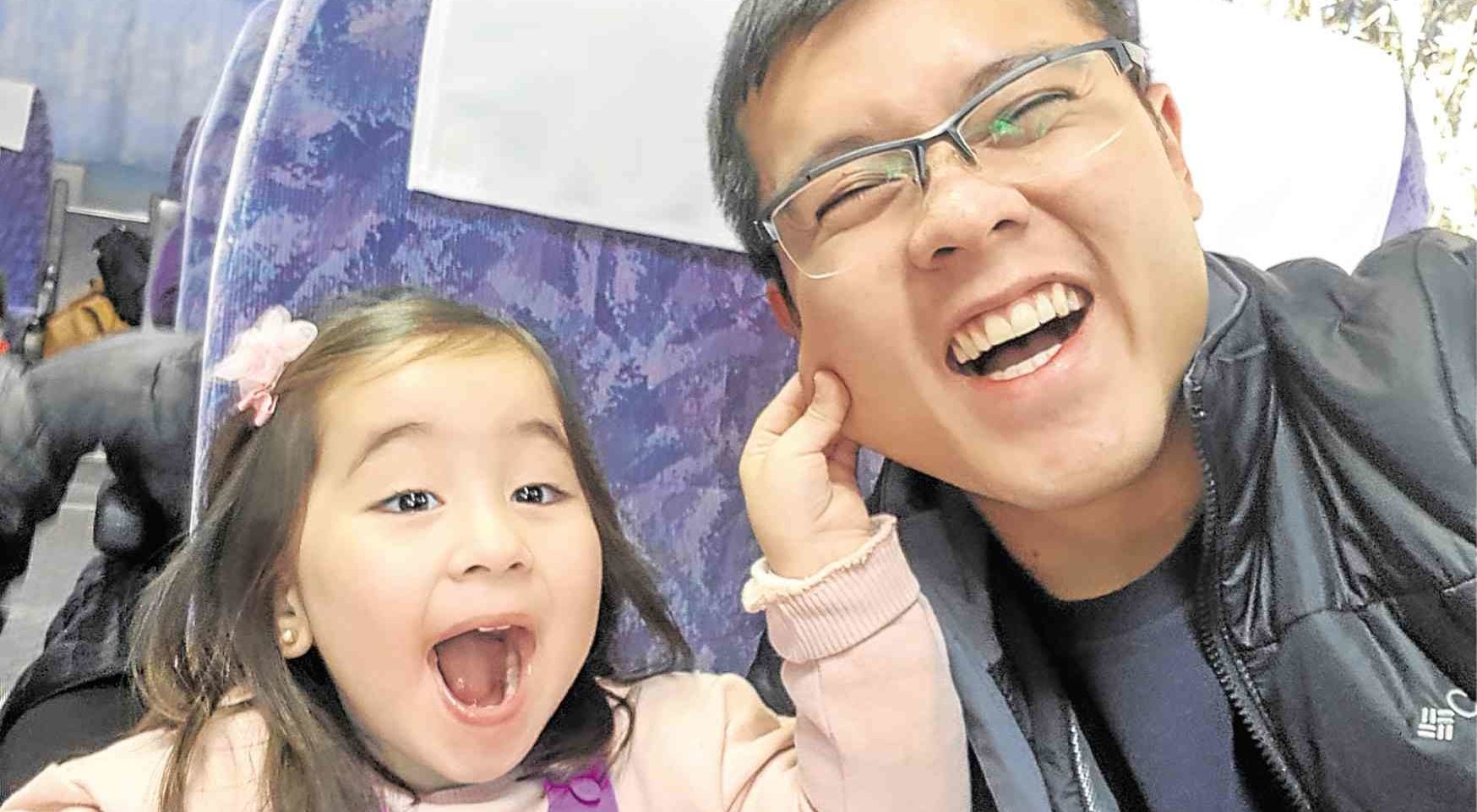 Scarlet Snow and Marc Henrich Go ham it up during the family’s Disneyland trip. 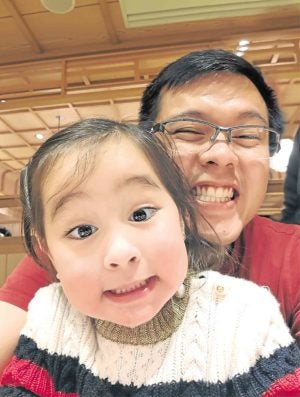 Yet people, particularly netizens, know of him as the favorite photographer of the world’s most followed child celebrity on Instagram, Scarlet Snow Belo.

IG followers—by the millions—lapped up his photos of Scarlet Snow, for example, as the Samurai baby, or as Audrey Hepburn in “Breakfast at Tiffany’s.”

But again, that’s only a fraction of his interesting (young) life story, one marked by irony and paradox.

When he took his oath with the other new architects early this year, and gave a speech for the 2018 batch, he told a touching story:

“My father was born in Davao to a poor family of eight; in fact, there was a time when they could afford to send only one child to school. When my dad passed his board exam, he was not able to attend his own oathtaking in Manila because of financial difficulties. It was only after that he learned that he actually placed among the Top 9 in the 1980 engineering board examination.

“I feel bad for my father, because he worked really hard to rise above his situation, against all odds. He deserved to receive his award and recognition as a topnotcher.

“But because of life’s circumstances, he didn’t get that opportunity. I feel it’s poetic justice that 38 years after, I stand on the same venue and stage as my father’s own oathtaking to receive my award as the topnotcher; and I feel I receive this recognition for the both of us. This is as much his success, as it is mine.”

That recounting must have tugged at the heartstrings of many in the audience. Go’s story is one of grit and determination—and commitment to the pursuit of higher learning, against all odds. It is also the story of sheer talent.

His ancestors migrated from China to Davao, where Go and his three other siblings were born and grew up.

His father, Hinesto, is an engineer, and his mother, Erlinda, an accountant.

His paternal grandfather, GoLePek, migrated from Fujian to Davao to flee the unrest in China.

In Davao, GoLePek met a Cebuana, Honorata Villabito, whom he would marry. The couple settled down in Davao and had eight children, the second of them being Go’s father.

Go recalled his father’s early years of struggle: “My father was very studious and started to work part-time in a store to support his family. But when my grandfather found out, he asked my father to stop (work) because concentrating on education would be more beneficial in the long run. This proved to be true, my dad placed ninth in the 1980 engineering board exam.”

The younger Go, who himself would top the architecture board exams in 2018, is the second of four siblings—he has two brothers and a sister.

Go now says of his oathtaking: “It’s a humbling experience being able to honor my parents in front of thousands during my speech…”

After graduating from the College of Architecture at the University of Santo Tomas in 2014, Go didn’t head straight to an architecture firm. He detoured to photography.

He recalled: “Fresh out of college, I pursued my other passion of photography instead for two years. I traveled across the Philippines, shooting for some of the biggest corporations.”

He gained recognition for photography.

“At that time, all my friends were already architects working for the largest architectural firms, some putting up their practice. Every time we’d meet, I would realize that I was the only one without a title. They’d joke around saying, ‘Mas masaya naman ginagawa mo…’ But of course, they also say, ‘Wala naman ’yan kung late ka o maaga. Basta sa huli lahat tayo arkitekto.’”

His stride in photography, however, still left him with what he described as “that insatiable feeling that I was left behind.”

He realized how much he still wanted to be an architect, so he prepared for the board exams. After he landed first place, he explained where he was coming from: “It isn’t the end goal. It just marks the start of a life-long journey to be the best version of myself, and the best architect I can be.”

He now thrives on the synthesis of photography and architecture.

“I learned that it is my background in architecture that makes me a better photographer,” he said.

“I realized that I am inclined to creativity as much as I am to technicality. This perfectly fits in with my profession because architecture is both an art and a science.

“If you think about it, photography is, too. Both crafts require high levels of precision, and yet they allow, actually encourage, creativity in execution.

“Architecture is best felt through experiencing the structure first hand. Photography allows me to capture that essence from an architectural point of view, and share it with others.”

His recent photography exhibit showed just how being an architect enhances his photography. Unlike the ordinary photos of houses and interior design that merely capture the house décor, his photos tell the story of space—the relation of space and function, space and the human mood and feeling, space and objects.

His photos of buildings and houses—which he did for the design firm of Budji Layug and Royal Pineda—show a play of shapes, patterns and volumes, a play of light and shadow.

His travelogue photography is a microcosm not just of places, but also of moments. The waves, for instance, become a study of texture and hue.

His photos of events prove that he has innate curiosity, love of people, and thirst for adventure—a must for a good photographer. For instance, he captured Pope Francis’ warm moment with the children at UST on his visit here in 2015.

As they say, Go has an eye. And apparently his work at Budji+Royal sharpens his aesthetics. He’s been traveling with Layug, photographing the firm’s work for the latter’s upcoming book.

Go doesn’t underestimate the influence of Layug and Pineda on him: “I think I am still in the process of discovering my personal preferences. But I am influenced by my mentors, Budji Layug and Royal Pineda, in preferring modernity in design.

“I am inclined to designs that are simple, functional, and beautiful—structures that reflect clean lines, spaces that open out to the outdoors, and a right balance of form and substance.”

In Paris last year for the wedding of Dr. Vicki Belo and Dr. Hayden Kho, Go once played babysitter to Scarlet Snow, with Scarlet’s yaya, just one of the occasions he got to be with the celebrated child—he showed her how to brush her teeth well.

“Scarlet Snow is very spontaneous, you’ll never guess what she’ll say or do next!” he described his celebrity friend.

“She always surprises everyone with her wit and charm. She is genuine, bubbly, and actually very funny with her antics. Her candid enthusiasm is contagious. “People always say you have to be more childlike in character—relishing the feeling of pure excitement, being genuine and not caring what others think, cutting yourself loose from burdens, and being in awe of what this world has to offer.

“Basically it’s focusing on the beautiful and good things in the world, and letting go of those that pull you down.

Go has been lucky in that he gets to spend time with Scarlet and her family.

“My favorite moments with Scarlet are those times when I photograph her—dressing up as the sophisticated Audrey Hepburn, the Little Mermaid out of water, the cutest Samurai Baby, and the adventurous Lara Croft! Each time is different. She’s actually just playing around, but the different facets of her personality really show.

Outright sunny sometimes, moody the next, and at times, prim and proper.

“Of course, another favorite moment was when I celebrated my birthday with Scarlet, Hayden and Vicki at Tokyo Disneyland. Scarlet even sang me happy birthday in Mandarin! She insisted on carrying the birthday cake herself, but dropped it! So I ended up with two whole cakes and one squished one!”

Not every topnotcher gets a crushed cake on his birthday.

He is one grateful topnotcher: “Oftentimes we are limited by our own plans; but when we put our trust in Him, we eventually see His plans are always beyond our own.”