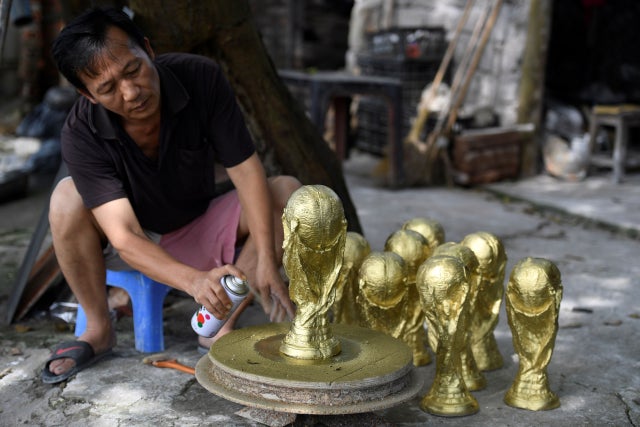 In a dusty workshop on the outskirts of Hanoi, workers busily mold, set and spray hundreds of replica World Cup trophies as orders flood in ahead of next week’s tournament.

Demand in football-mad Vietnam is soaring for the handmade plaster models of the real 18-carat gold trophy that will go to the winners of the month-long World Cup hosted by Russia that starts Thursday.

Craftsman Vuong Hong Nhat has been making the foot-tall replicas since the 2010 World Cup in South Africa, perfecting his hand-carved design over several months to give as gifts.

“Initially I didn’t want to sell the trophies, I was just trying to feed my passion for football and give them to friends and family,” said the 57-year-old Manchester United fan.

But they proved so popular he now sells them and expects to receive 3,000 orders this year — triple the number he made in 2014.

With just three assistants in his small workshop he’s struggling to keep up with demand.

“I work all day to fill the orders, but it’s not enough. I have to work until midnight,” said Nhat, exhausted, as workers pour plaster nearby.

His spray-painted gold versions of the coveted trophy sell for just $3.50 (P180), a steal compared to the estimated $150,000 (P8 million) price tag on the real number designed by the late Italian sculptor Silvio Gazzaniga.

That version, the FIFA World Cup Trophy, has been in play since 1974 when it replaced the original Jules Rimet Trophy given to Brazil in 1970 after it clinched its third World Cup win.

The original Jules Rimet Trophy was stolen in Brazil when the back wall of its case was removed by thieves in 1983 and has never been recovered.

For Nhat’s customers, the replicas add a sprinkling of glory before the World Cup.

“Holding the trophy I feel like Zidane (when he) won the World Cup in 1998”, France national team supporter Dang Viet Duy said.

It’s a small consolation for football fans like Nhat who have little hope of seeing Vietnam — a lowly 102nd in FIFA’s official rankings — compete in the World Cup any time soon.

“If they do, I’ll give my trophies away for free,” said Nhat. NVG