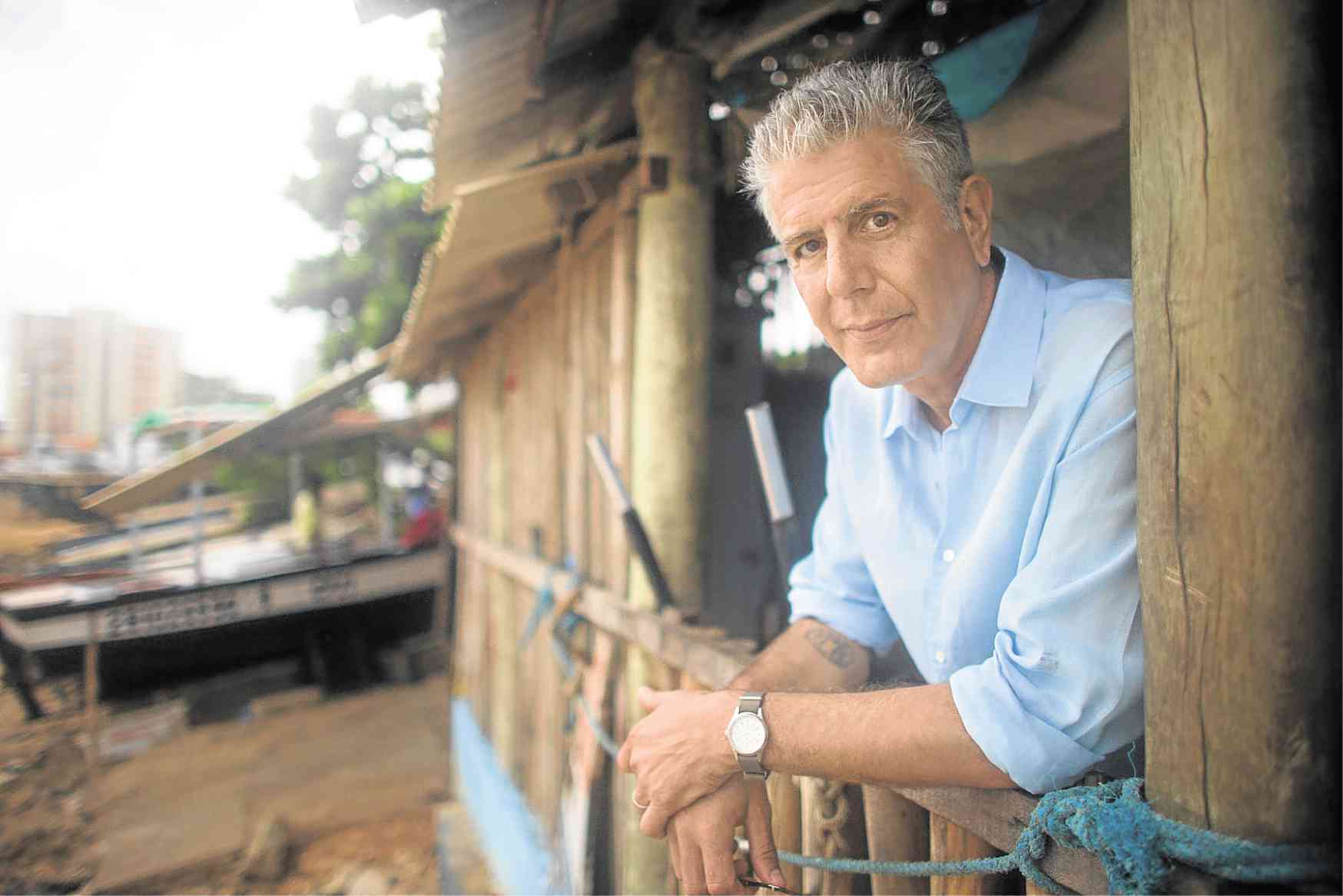 Anthony Bourdain, then 52, in Manila in October 2008 to film the first Philippine episode of “No Reservations”

“Sisig is everything I love about food,” Anthony Bourdain told me before digging into his dalandan sorbet.

The icy palate cleanser eclipsed the previous courses he politely refused to touch: a salmon caviar timbale with shrimp-pomelo salsa, followed by a decorative plate of pan-roasted duck breast.

“Sizzling pork with all that good fatty, rubbery, crispy texture? Sisig is just wonderful. And it goes well with beer!”

It was Oct. 25, 2008. We were at a private dinner in Pasay City, where I was fortunate enough to land a place at the table.

While most of my dinner companions, a mix of foodie nerds and fan boys bordering on the obnoxious, were engrossed in the conversation with the “Kitchen Confidential” author and “Parts Unknown” host, I kept to myself, quietly observing how this silver-maned knight of our round table consumed the mostly bland continental food in front of him, as he dished out diatribe against the obsessive nature of bloggers (“When you collect food experiences like butterflies, you’re not enjoying it the way it should be”) and the Asian appetite for man’s best friend (“I’ll pass on the puppy head, I wouldn’t eat what most Americans would call a pet”).

Save for his teaspoon’s wet smooch with a scoop of sorbet, his utensils saw little action.

I found this rather amusing, considering how, only hours before, the well-meaning wait staff fussed over his place settings and dusted his chair as if it was the throne of some visiting deity.

His ripped black jeans and brown leather flip-flops should have warned them that this was a man who didn’t need special treatment.

Excerpts from our hour-long conversation 10 years ago:

You’ve been everywhere in Southeast Asia. What took you so long to visit Manila?

It was blank page to me, flavor-wise. Unfortunately, your culinary ambassador is balut. Travel TV guys tend to do that first. It freaks out Americans who see it and it’s a good, easy visual. I don’t have any strong feelings about balut. It’s far from the weirdest or best or worst thing I’ve ever had. It’s so last week, the least interesting thing, and we’re totally avoiding it!

What are your thoughts on Filipino cuisine and its perception abroad?

I don’t think there is a focus concept about Filipino food. God knows there are plenty of Filipinos. And I know this problem does not exist in Hawaii, where they have this whole sub-genre of Hawaiian-Filipino fusion food.

The particular mix of Chinese, Malay, Spanish and American has led to some confusion. Your food is not so much Spanish as it is New World, as it is Latin American or Central American Spanish, which is a good thing.

Let’s talk about where you’ve eaten in Manila.

Today we were at the Farmers Market. I had adobo shrimp and some really amazing crab cooked with coconut milk and chili peppers. I also had a vegetable dish, that bitter squash with long beans.

In the Chinese section of town we had orange noodles with egg on top. Delicious. And, of course, lumpia, fried and fresh!

How do you think can we turn the Philippines into a food destination like Singapore or Thailand?

You push the food. You make it the central focus of promotional tourism. Singapore was late to catch on to that. They were surprised people were flying all the way there to eat!

You have to find a way to capture in a few images and dishes what is the heart and soul of Filipino cuisine. But honestly, and not kidding around, you are clearly a very foodie culture.

What would get your vote as our national dish?

From what I’m told, sisig is the national dish. Now that is just delicious. Sisig is everything I love about food. Sizzling pork with all that good rubbery, fatty, crispy texture? It’s just wonderful. And it goes well with beer!

What surprised me was the four-way goat business. I had a stew of goat guts with bile floating over the top. I’ve had bile straight before with whisky, and all of my experiences with bile have been pretty unpleasant—most of them occurring in the bathroom floor after a long night of drinking. But it was really good!

There was also this interesting bone marrow soup and broth. Bulalo? It really reminded me of ba kuh teh. I love dishes like this because people ate them because they were desperately poor.

Is there anything you won’t force down your stomach?

I wouldn’t eat what most Americans would call a pet (laughs). It pains me to see the process.

But it’s not something I associate with the Philippines.

It’s more common elsewhere. I don’t tend to be judgmental about these things. It’s just funny how Americans call any traditional food, like bugs in Thailand, as weird.

But then what the hell is a Chicken McNugget? Considering that most people who eat them have no necks and weigh 700 pounds, we can hardly sneer at anyone’s food practices.

Tell us about your foulest meal.

Fermented shark in Iceland. They rot it, putrefy it, and then place it in lactic acid. Compared to that, durian smells like fine perfume (laughs). And I like durian. Fermented shark is just horrible to smell, lethal to touch.

But the single worst meal was the business end of warthog. Literally eating crap, fur and sand in every bite is not a good experience.

I don’t think there is any question that they are replacing the traditional food press. They can, of course, be annoying. And they’re easy to make fun of. The food is getting cold and they’re writing notes, asking questions, taking photographs. That’s excessive.

When you collect food experiences like butterflies, you’re not enjoying it the way it should be. Eating should be a submissive act, you shouldn’t try to control the experience.

What would you have for your last meal?

Roasted bone marrow. Or maybe some really good, high-test sushi: one piece of uni on warm, crumbly rice with some Hokkaido seaweed. I’m talking about a $300 piece of sushi here. I wouldn’t mind dying with that hanging out of my mouth. —CONTRIBUTED