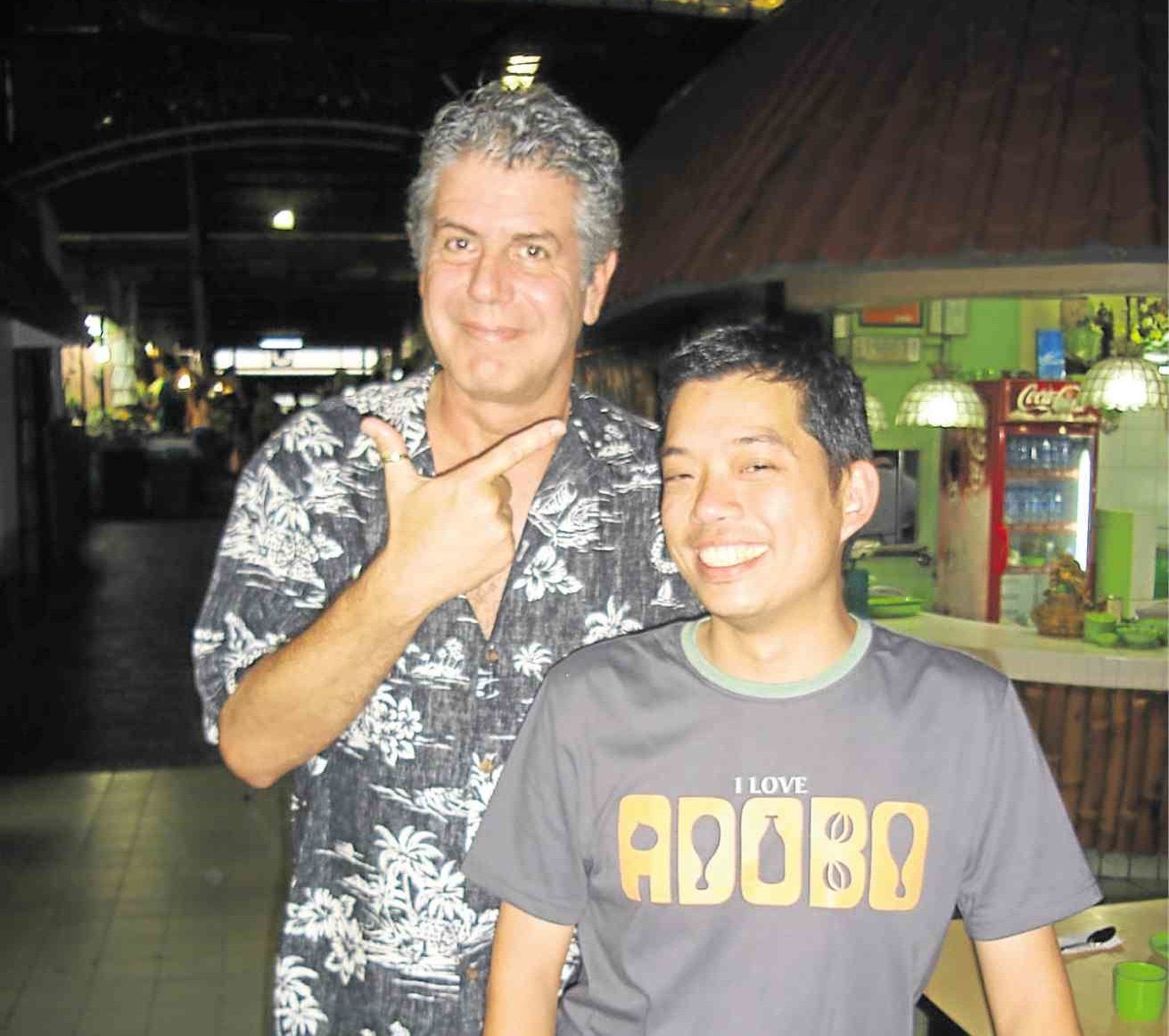 The author with Anthony Bourdain in 2008

It has been 10 years now, yet during our culinary walks around Binondo, we still get the occasional question, “How was he?”

“He” was chef, writer and newsmaker Anthony Bourdain, who took his life last June 8.

It was a decade ago when I had the rarest and most fortuitous privilege of giving Bourdain his first taste of the Manila culinary scene.

To the multitude of fans, some of whom had to drive from Manila to Pampanga where a segment was shot, catching a glimpse of the man was enough.

I had more than a glimpse. I had a whole day of eating out with him, and the irony of it was that I wasn’t even a big fan.

I had not read any of his books. While his popular TV series did ring a bell, I caught it only occasionally.

Claude Tayag had asked us if we wanted to entertain a chef-host of a travel show he couldn’t name yet. This needed no convincing as showing off our city was something we had been doing since 2005, off and on cam, in our bespoke tour Old Manila Walks.

As it turned out, this was for the Manila segment of Bourdain’s “No Reservations.”

The instructions from the producers were clear and simple: to capture what was local and showcase places that looked gritty but had tasty fare.

Easy, I thought—most of the metro was gritty anyway. And that was how we found ourselves walking on the streets of Binondo, Manila, and ending up at Farmer’s Market in Cubao, Quezon City.

It was a very quick shoot with a lot of food tried out spontaneously. Whatever Bourdain saw and fancied, we stopped and tried.

There was the corner fishball man whose fried chicken balls he tried (not to his liking). Then it was a sip of syrup-drenched taho from a hawker and a taste of pansit Malabon in an open-air talipapa called Carvajal alley.

Again, both not his favorites.

I later found out that the man was not really into sweet stuff, and that pansit Malabon was too fishy for his taste.

No problem. It was as real and gritty as he wanted it to be, sadly also a reflection of the economic currents that shaped the city’s street food scene.

What he did enjoy was a bite of the freshly rolled (Tsinoy-style) lumpia and the pan-fried siopao that came after.

Then it was off to Farmer’s Market dampa where I had, days before, pre-selected a set of representative regional specialties.

The dampa meal and everything won over Bourdain’s discriminating palate.

In the four hours we spent shooting, I saw a TV show host who was very straightforward, honest, and had no pretensions.

He seemed genuinely interested in the food presented to him, not just in terms of the physical taste and ingredients but also in the culture and history behind the food.

He was perceptive, too, and made observations that went beyond the subject of food.

For months after the show ran, I got tons of comments (both encouraging and nasty) on how we should have taken what arguably was one of the most recognized culinary personalities on a food tour of Manila.

Ours was not the definitive take on Filipino cuisine but rather an introductory taste of the diversity and complexity of eating local in a metropolis which, for better or worse, had so long defined what most people think of Filipino cuisine.

It was raw, spontaneous and it came without the frills, tasty but at times gritty, a reflection of Manila’s realities, and Tony’s attempt at sharing his little story with a bigger world. —CONTRIBUTED