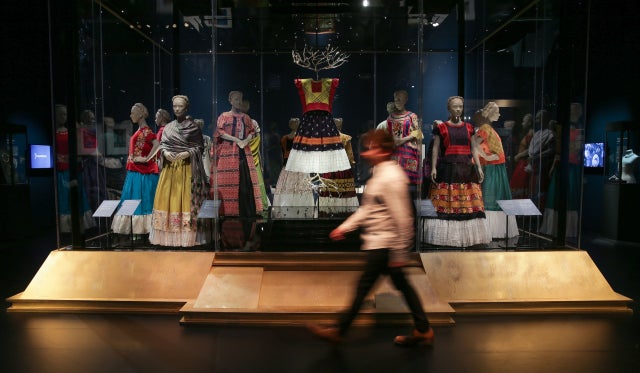 A museum employee walks past a display of dresses owned by Frida Kahlo, with the central dress: 'Tehuana outfit' Huipil (tunic) before 1954, cotton muslin with embroidery and Enagua (skirt) and bolan (flounce), before 1939, both from Isthmus of Tehuantepec, Oaxaca, Mexico, during an exhibition entitled 'Frida Kahlo: Making Her Self Up' at the Victoria and Albert (V&A) Museum in west London on June 13, 2018. Image: AFP/Daniel Leal-Olivas

A London museum is bringing together Frida Kahlo’s clothes, paintings and objects to explore the adverse life story behind one of the 20th century’s most celebrated female artists.

“Frida Kahlo: Making Her Self Up”, which runs from Saturday until November 4 at the Victoria and Albert Museum, showcases more than 200 items from the Blue House, Kahlo’s base in Mexico City, where she died in 1954 aged 47.

The house-turned-studio, where she was born, grew up, lived and worked, also served as a refuge for the exiled Soviet revolutionary Leon Trotsky, with whom she had an affair.

“A counter-cultural and feminist symbol, this show offers a powerful insight into how Frida Kahlo constructed her own identity,” said the exhibition’s co-curator Claire Wilcox.

The exhibition brings together dresses, jewelry, letters, paintings, family photos, medical corsets, the make-up she used to emphasize her monobrow, medicines, and her false leg.

The leg has a red boot, a few pieces of Chinese embroidery and even a bell on it “to make it even more obvious,” Mexican co-curator Circe Henestrosa told AFP.

“Why would it be an ugly leg if she was an artist?” she said.

Kahlo’s health problems were devastating, but the painter knew how to make a virtue out of adversity.

The daughter of a German photographer and a Mexican mother of indigenous and Spanish descent, she suffered from polio as a child which resulted in her right leg being shorter than the left. It was eventually amputated the year before her death.

Aged 18, a bus she was traveling home from school was hit by a tram.

Kahlo was impaled on a handrail, her spine broke in three places, several bones were fractured and her sexual organs were badly damaged, rendering her unable to have children.

Her dreams of going to medical school were dashed, but she turned to painting in her long convalescence, with the help of a special easel with which she could paint self-portraits from her bed, using a mirror.

“It was the start of a great artistic career, but also the start of her physical deterioration,” said Henestrosa, who in 2012 organized an exhibition of Kahlo’s clothes at the Blue House.

“Good to be different”

Henestrosa has a family connection to Kahlo. Her aunt was part of the painter’s intellectual circle and brought her brightly-colored Mexican indigenous blouses and dresses from Oaxaca in the south.

Kahlo wanted to show her Mexican values and portray herself as “very Mexican” in an era immediately after the 1910 to 1920 Mexican Revolution, in which the country sought to reinforce its indigenous identity.

Furthermore, “she was a communist and it made her seem more like one of the people,” said Henestrosa.

But her politics do not fully explain her style of dressing.

“She started to wear long skirts to hide her leg and it was the first time she started to establish a relationship between her body and her clothing,” the curator said, noting that the indigenous outfits draw attention to the torso.

“That’s what we wanted to show in this exhibition: Frida the person, Frida the woman, someone who liked perfume, was incredibly feminine and did not let her disability define her,” said Henestrosa.

“A dark-skinned, disabled Mexican artist who served as a model for young girls: it’s very good to be different.” CC