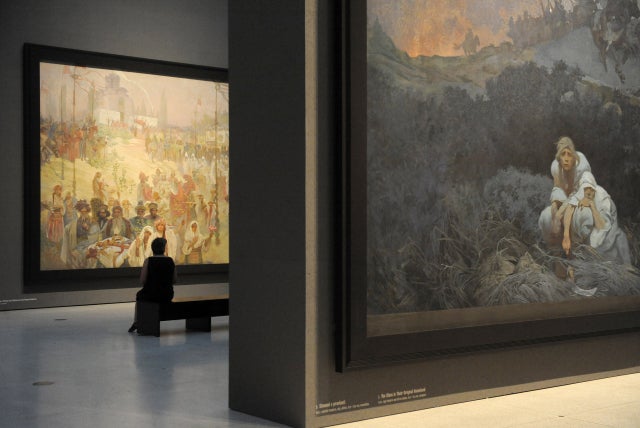 A visitor looks at the "Slav Epic", a cycle of 20 allegories tracing the history of the Slavic people and inspired in part by mythology. Image: AFP/Michael Cizek

The giant Slav Epic series by Czech Art Nouveau painter Alfons Mucha has finally secured a permanent home after 90 years in temporary depositories, including a hiding place from the Nazis under a pile of coal.

Mucha (1860-1939) said in his testament that he wanted the allegoric cycle of 20 paintings depicting Slav myths exhibited in Prague on condition that the city would build a home for the work.

Prague became the owner of the canvases — which range in size from 20 to 50 square meters (215 to 540 square feet) — in 1928, but it has so far failed to meet the wish of the painter famous also for his floral posters of actress Sarah Bernhardt.

On Thursday, city hall voted to secure a home for the work that Mucha considered his masterpiece.

“I see this as an overdue debt that we owe Alfons Mucha,” said Prague mayor Adriana Krnacova.

The new exhibition hall will be located inside Prague’s “Lapidarium”, a 19th-century Art Nouveau building that has been abandoned for decades.

Prague believes its reconstruction will help revitalize the area which has the potential to draw tourists and locals alike.

Art Nouveau was characterized by intricate linear designs and flowing curves based on natural forms. The movement was very popular from the 1890s until its decline after the First World War.

“The advantage of this solution is that this grandiose work could have a home within two years and a half,” says Krnacova.

“This is the best solution for the Slav Epic,” said Jan Wolf, Prague councilor  in charge of culture, adding that the building could also host other works by Mucha.

According to a 1913 contract, the work was commissioned by an American Slavophile, Charles Crane, with the intention to donate it to Prague.

Mucha began the Slav Epic in 1910 and completed it in 1928, 10 years after the former Czechoslovakia became independent following the collapse of the Austro-Hungarian empire.

In the same year, the cycle was exhibited for the first time at Prague’s sprawling Trade Fair Palace.

In the 1930s and 40s, the canvases were placed in a depository and then hidden under a pile of coal from the Nazis, who considered Mucha a freemason and Jewish sympathizer.

Mucha died in 1939 shortly after being interrogated by the Gestapo.

The post-war communist regime in turn denounced the painter as a decadent bourgeois.

It was only in the 1960s that the collection was taken out of obscurity and put on display at the Moravsky Krumlov castle in the Czech countryside, near Mucha’s birthplace of Ivancice.

In 2012, the paintings were moved to Prague as castle conditions deteriorated.

Over the years, more than a dozen places were suggested for the Slav Epic amid disputes between Prague and Mucha’s family.

Pending its installation at the Lapidarium, the entire work will be exhibited at city hall, itself an Art Nouveau building, to mark the 100th anniversary of Czechoslovakia’s birth. CC