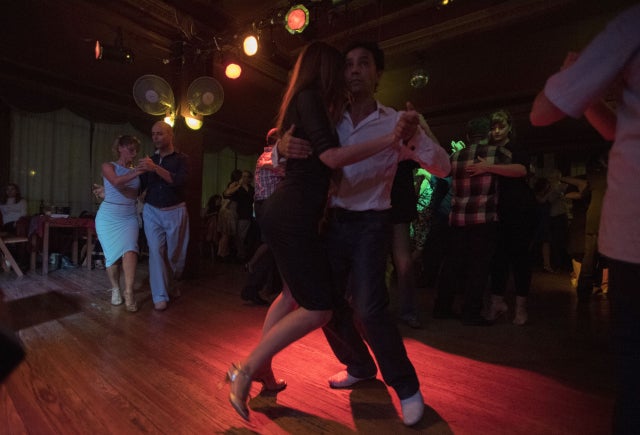 Montevideo: No longer the ‘forgotten capital’ of tango?

Every night, 69-year-old Edinson chooses one of his 11 pairs of dance shoes, slips into a smart suit and heads out to dance tango in the clubs of Montevideo, a city that is looking to breathe new life into an old tradition, one that has long been eclipsed by its more famous neighbor, Buenos Aires.

“I’ve been dancing for 10 years now,” said Edinson, a retired soldier, and this stylized exit from his house has become a nightly ritual, “no matter what the weather is.”

With a nod of his carefully coiffured-head, he invites a woman onto the parquet dance floor, where they skillfully glide past other couples in a club that is almost hidden behind a covered market.

It is here that the Joventango (“Young tango”) association organizes so-called “milongas” every week, evenings of dance that are open to initiates as well as to the merely curious and the passing tourist.

Tango was born in the late 19th-century, behind the closed doors of salons in Montevideo and Buenos Aires because the spectacle of dancers pressing passionately against each other was originally deemed to be too steamy to be performed in public.

It later gained popularity and then respectability after it spread to Paris.

In an ironic twist of history, today in Uruguay tango is “relegated to something old people do,” fumed Martin Borteiro, who like his wife Regina Chiappara is a former professional dancer.

At the start of the year, Martin and Regina were called on by the mayor’s office to come up with a diagnosis of what is ailing tango in Montevideo, with an eye to developing a strategic plan to revive the dance.

The picture painted by the couple was bleak: fewer and fewer milongas, older dancers and less public support. In a sign of how far the decline has gone, only one local maker of tango shoes still exists in the Uruguayan capital.

“The current tango community is very fragile,” said Martin. “Montevideo is the city where tango was born, so there is a danger of something vanishing which is part of our identity, part of our tradition.”

Esteban Cortez, a 43-year-old tango teacher, refuses to countenance it: losing this dance would be “like losing football for me, it’ll never happen” in a nation in a country where soccer is almost like a religion.

“If our tango disappears, we will disappear as a country,” he said.

His wife Virginia Arzuaga, 40, who is herself a teacher, noted that the dance had been named part of the world’s cultural heritage by UNESCO in 2009.

“And when something is named a cultural heritage, it’s because it’s about to die out,” she said.

“There are those who’ll tell you, ‘when the tango bug bites you are lost, it’s a voyage of no return,'” said Virgina, reflecting on the growing popularity of the dance overseas, in particular in countries like Turkey, Russia and France.

“It’s a shame that here, in a city with so much tango in its history, it’s not appreciated, valued or cherished,” lamented Joselo Ferrando, 45, who runs one of the city’s main tango events, Chamuyo.

A far cry from Argentina

Uruguay’s tango aficionados gaze enviously across the waters of the Rio de Plata at the neighboring Argentinian capital, where tango is king, and its fame has spread around the world.

“The most obvious comparison is with Buenos Aires, which has made it a question of their identity and worked to promote it both inside the country and abroad, as a selling point for tourism, which is an important source of revenue,” said Ferrando.

In Montevideo, “we still have so much to do, including broadcasting the music in the media, teaching the dance in schools and training teachers,” he said.

But in recent months, the tide may have begun to turn: a tango museum has opened and a major new festival, dubbed “Montevideo Tango” is scheduled to take place on October 27.

Pianist Alberto Magnone, 71, works in an area of the historic city center that is filled with statues and painted murals to remind locals and tourists alike of the capital’s role in the history of tango. It was here, in 1917, that “La Cumparista” — the most famous tango tune of all time — was composed.

“Tango was a joint product of both Uruguay and Argentina, but it was we who didn’t give it the place it deserved,” he said.

The mayor’s office hopes to launch its plan in July, based on the diagnosis set out by Chiappara and Borteiro, the former pro dancers.

“The strategic plan will be: ‘Montevideo, local tango, a far cry from the tango-spectacle, on the stage,” said Jorge Navratil, director of the city’s cultural promotion campaign.

The aim will be to “create new audiences, both on the local and international levels, and put Montevideo back on the world map” of tango, including the creation of a municipal orchestra dedicated to tango music, plus a public outreach to high schools, shows and a public works project to preserve the heritage.

Because tango is “like a language: when you stop speaking it, it dies,” he said. MKH