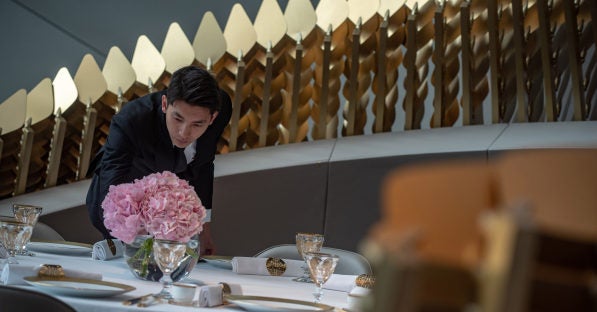 A waiter prepares the table at a restaurant of Melco International's 1.1-billion USD "Morpheus" resort in Macau. © Philip FONG / AFP

Rows of exposed elevators glide up and down the imposing lobby inside the $1.1-billion “Morpheus” resort, a 42-story addition to Macau’s glitzy skyline named after the Greek god of dreams and developed by Melco International.

Iraqi-British Hadid, who died in 2016, was the first woman to win the prestigious Pritzker Prize for architecture. Her major works in China included the Guangzhou Opera House and a mega mall in Beijing.

Describing the design as a “jump into the unknown”, Muscettola said the exterior ribbons of steel hold up the building and free up space inside by minimizing the need for vertical columns.

Melco’s chairman Lawrence Ho told AFP he had “wanted to find the most iconic architect that can do something just insane” before the project started in 2013.

Semi-autonomous Macau is the only place in China where gambling is legal, bringing in revenue that easily dwarves Las Vegas.

The resort’s opening comes as the enclave is undergoing something of a renaissance, with gaming revenues bouncing back after being hard hit by a corruption crackdown launched by China’s President Xi Jinping in 2012.

While the big spenders have returned to the territory — high-rollers were Macau’s biggest drivers of revenue growth in 2017, according to Bloomberg News — analysts say the mass market is also behind growth seen so far this month.

Extravagant duplex villas with their own in-room gym and massage quarters are located on the top floors of Morpheus for VIPs, along with a gaming area exclusively for these residents.

There is also a rooftop pool, while two restaurants by Alain Ducasse, one of the chefs awarded the most Michelin stars, are part of efforts to court luxury-seeking crowds.

Revenues slid after Xi declared his war on graft with many mainland big spenders staying away from Macau, which had gained a reputation as a center for laundering illicit money out of China.

In response to the crackdown, casino giants launched a slew of new mega-resorts, offering everything from theme parks to luxury spas as they looked to attract more mass-market gamblers to compensate for the fall in high-rollers.

But Macau’s monetary authorities this month issued a warning to financial institutions against the illegal use of UnionPay cards as China continues to crack down on capital outflows.

Ho’s father Stanley, 96, who made his riches by transforming Macau from a sleepy Portuguese outpost into the world’s biggest casino hub, officially stepped down from his flagship casino empire SJM earlier this week. MKH