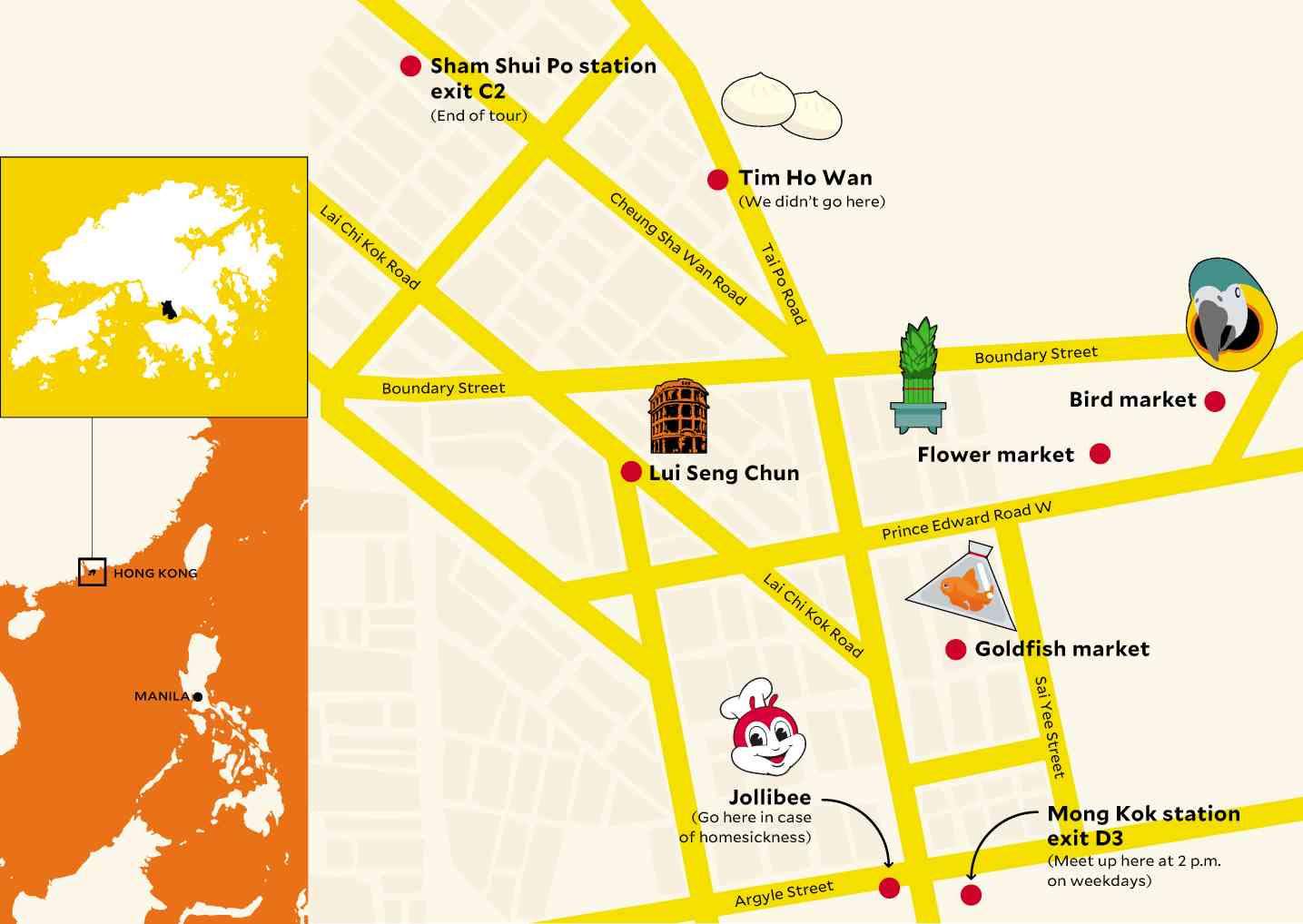 NOT YOUR USUAL HONG KONG TOUR

There are a few things I want to do in Hong Kong. I want to explore the labyrinthian Chungking Mansions; slip in a cheongsam à la Maggie Cheung in “In the Mood for Love”; and see a coffin apartment in real life.

I blame Wong Kar-wai, and a news feature about coffin apartments I saw on the TV when I was 7.

When the opportunity to visit Hong Kong arrived, I knew where to go. At 2 p.m. on a weekday, I headed to Mong Kok station exit D3 and looked for a person in yellow shirt with the print “Hong Kong Free Tours.”

I read in the New York Times that if there is one tour to join when in Hong Kong, it’s this one.

It’s a specialized tour: “Hong Kong stories, told by Hong Kong people” for only HK$100  (P670). It is a three-hour stroll through the flower, bird and fish markets in Kowloon island, and it ends at Sham Shui Po, one of the poorest districts in the bustling city less than two hours from Manila.

Our guide Derek Chu welcomed our group of five, all strangers from different cities. There was Perth, Manhattan, Munich, Singapore and I, the lone girl from Makati.

We walked away from the famous sneaker street and ladies market and onto the first stop. Outside the stores of the fish market were groups of colorful swimmers in airbags. According to our guide, feng shui dictates followers to display fish tanks in specific areas of the house to bring in prosperity. (That probably explains why Faye Wong bought so many fishes for Tony Leung’s apartment in “Chungking Express.”)

The market visit with Derek was a new perspective of the city famed for the Instagram backdrop Rainbow estate, efficient subway system and delicious pork buns. There were turtles sold at HK$20,000  (roughly P135,000) a pop, which is believed to cure different ailments including terminal diseases.

The small but lucky bamboos with a red ribbon tied on the stem are not just accouterment on store fronts and offices. The plant’s ability to grow upwards symbolizes continuous growth in feng shui. Some Cantonese buy birds in the market to let the feathered creatures fly away—a Buddhism practice of setting a captive animal free.

These are things often overlooked when travelling —stories behind giving flowers or a cup of tea sold in an old building that can’t be read in random travel blogs.

During the tour, store owners and bystanders would wave and say hi to Derek. He grew up in Kowloon island, his grandfather had a pet bird and he told his own stories in between the tourist information. He showed us buildings that are either old or on the rise, even the façade of a seemingly innocuous real estate office.

The windows and doors of that office were covered with color-coded posters of listings: orange posters are for rent, those in green are for sale. A 570-sq foot unit starts at a whopping HK$2.3 million  (over P16 million).

Somewhere in between the long walk across markets, the tour had taken on a 180-degree topic turn: affordable housing.

It’s a problem that has hounded millions of Hong Kong residents for decades now, and it’s the major topic in the tour.

As we walked past the bird market, the neighborhood looked more bleak, and we started seeing a handful of homeless people.

We stopped at a small park that overlooks a landscape of dilapidated and dated buildings. From his backpack, Derek had taken out a black book titled “Trapped.” It was a compilation of photos that showed the inhumane living conditions of his people, the seniors in particular.

First was a cage house, a couple of rectangular corral made out of steel stacked on top of each other. It looked more like a prison cell. There were units made of galvanized iron sheets situated on rooftops, Derek said it feels like an oven inside. Then came the photos of a family of four confined inside their home that is no bigger than a studio unit; and a fire-exit landing that is a place to crash at night and a regular stairwell by day.

Finally, a set of photos that can induce claustrophobia: images of the infamous coffin apartment. The tenant himself had taken the photo, there was no room for another person inside the miniscule space. We could see the tenant’s feet, as well as most of his possessions (a small TV screen, a couple of clothes and groceries), cramped inside an apartment not bigger than a closet.

The communal bathroom-kitchen is as horrific. The stove is right next to the toilet bowl.

Poverty line is drawn at HK$3,800, about P25,000—a manageable income for a single person with no dependents in the Philippines. But not Hong Kong.

Sleeping in public places is illegal here. What happens if the person still can’t pay rent, Derek asked. The poor go to McDonald’s to buy soda and spend the night there.

“That just makes the mood somber,” the guy from Manhattan said.

“It can’t always be bird market and flower market,” the guy from Perth answered.

We didn’t see a coffin apartment that day (they only show photos in the tour), but my stomach was queasy, like I just hopped off a theme park ride going 180.

“No one leaves the tour happy,” Derek said as we walked toward the end of the destination.