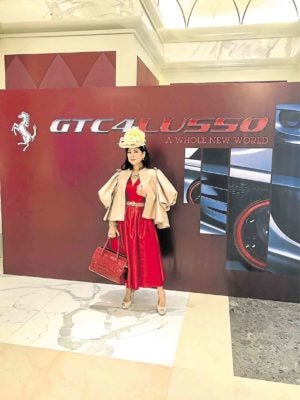 Bless all the dads and granddads today as we celebrate Father’s Day! It’s probably the only day that fathers are shown the love and affection usually accorded to mothers.

It is an extra-special day for my dad, Alex Prieto, because June 17 is also his 57th wedding anniversary with my mom, Marixi. Indeed, there is much to celebrate and give thanks.

Here are some gift ideas, ranging from the not-another-necktie level budget to a sky’s-the-limit, spend-it-all blowout for the man of the house.

One of the most practical gifts is a pair of eyeglasses.

Jins, the largest eyewear retail brand in Japan, recently opened its first store in the Philippines at SM Aura Premier.

The launch was marked with a traditional saké barrel-breaking ceremony led by Hitoshi Tanaka, CEO of Jins, accompanied by local partners Ben Chan and Virgilio Lim of Suyen Corp., along with SM Supermalls executives Carol Sy and Steven Tan.

Also at the launch were Taguig Mayor Lani Cayetano, and Dr. Takeo Okada, First Secretary of  Japanese Embassy in Manila.

The eyeglasses specialty store has over 343 outlets in Japan, and another 110 in the United States, China and Taiwan. Each store carries about a thousand styles of glasses, and takes pride in finishing a pair in 30 minutes.

Coincidentally, both Bench and Jins were established in 1987, and both have the philosophy of providing consumers with quality yet affordable products.

For dads who are into home gadgets and products, I suggest a look at Dyson.

Powered by Dyson’s small and powerful digital motor, the Dyson Supersonic hair dryer is fast, focused and intelligent. It is the result of a £50 million investment in the science of hair.

And then there is the Dyson Pure Cool Link purifying fan, which removes 99.95 percent of allergens and pollutants as small as 0.1 microns from air.

Happy father Franco Laurel hosted the Dyson opening at The Podium, where he demonstrated the different Dyson products.

Dyson also has shops in SM Aura Premier and Greenbelt 5.

For dads who like to enjoy life, I suggest a bottle of Cointreau, which I found out recently, is essentially to make the perfect margarita.

The drink was named after American socialite Margaret Sames, who first mixed tequila and Cointreau at one of her lavish parties in Acapulco, Mexico, in 1948.

For 70 years, the orange-peel-based French liqueur from the Loire Valley has cooperated with its agave plant Mexican cousin to produce the cocktail that we all grew up with.

The Island at the Palace and Jose Cuervo Tradicional recently paid homage to the margarita’s origins with a “Margarita Loves Cointreau” event poolside in Uptown Bonifacio in Taguig City.

The party included live DJ music, great food and an endless supply of margaritas that would have made Margaret proud.

Of course, if none of the above is enough to honor your man, then I present the Ferrari GTC4Lusso, the pinnacle of evolution of the Grand Tourer concept.

The premiere of the vehicle, as we certainly cannot just call it a car launch, was held at the luxurious grand ballroom of Okada Manila.

Hosted by the charming Paolo Abrera, the grand reveal came with a fanfare of lights, the LED screen splitting open, and the sonorous sound of 12 revving cylinders dramatically announcing the arrival of the Ferrari GTC4Lusso.

Much to the crowd’s delight, alighting from the car were Autostrada Motore’s top officials, GM Natalia Trompeta, with Johnas Soriano, Marc Soong, and, of course, chair and president Wellington Soong.

Ever the gentleman, Willie welcomed the latest addition to the Ferrari stable with a toast of Remy Martin XO cognac.

The car—sorry, vehicle—is a Ferrari at its core, with a naturally aspirated V-12 engine that will take the driver from a standing start to a  100 kph in just 3.4 seconds.

The engineering marvel has a top speed of 335 kph, best not achieved on our dear city’s streets.

This is the Happy Father’s Day gift to outrank all other gifts, and I have neither the time nor the space to add in more superlatives about it. Let me just say to all the mothers out there, let’s just wait until its Mother’s Day again!