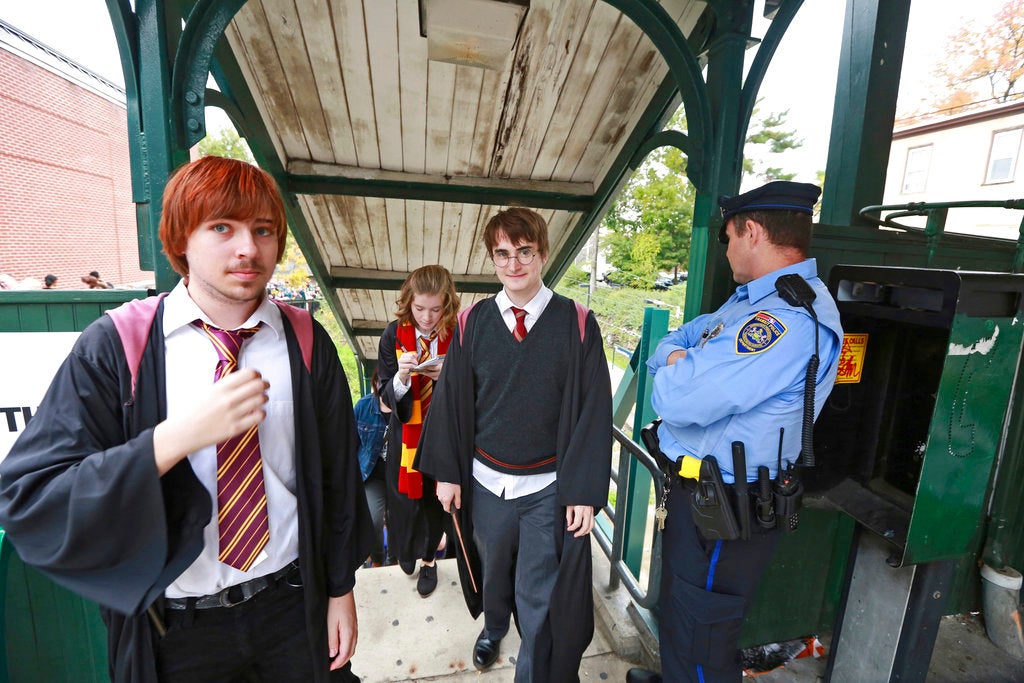 In this Oct. 18, 2014, photo, students from Chestnut Hill College in Philadelphia wear costumes to attend an annual festival based on the Harry Potter fantasy series conceived by British author J.K. Rowling, including Dan Lemoine, second from right, dressed as the title character; Mollie Durkin, second from left, dressed as the character Hermione Granger; and John Spiewak Jr., left, dressed as the character Ron Weasley, as they arrive at the festival in the Chestnut Hill neighborhood of Philadelphia. In 2018, Warner Bros. notified organizers of Harry Potter fan festivals around the U.S. of new guidelines prohibiting any use of names, places or objects from the fantasy series, in an effort to crack down on unauthorized commercial activity at such events. (David Swanson/The Philadelphia Inquirer via AP)

PHILADELPHIA (AP) — Warner Bros. is cracking down on local Harry Potter fan festivals around the country, saying it’s necessary to halt unauthorized commercial activity. Fans, however, liken the move to Dementors sucking the joy out of homegrown fun, while festival directors say they’ll transfigure the events into generic celebrations of magic.

“It’s almost as if Warner Bros. has been taken over by Voldemort, trying to use dark magic to destroy the light of a little town,” said Sarah Jo Tucker, a 21-year-old junior at Chestnut Hill College, which hosts a Quidditch tournament that coincides with the annual suburban Philadelphia festival.

Philip Dawson, Chestnut Hill’s business district director, said Warner Bros. reached out to his group in May, letting them know new guidelines prohibit festivals’ use of any names, places or objects from the series. That ruled out everything from a meet-and-greet with Dumbledore and Harry to Defense Against the Dark Arts classes.

“It was very quickly apparent (we) weren’t going to be able to hold festivals like years past,” he said. The late October festival drew about 45,000 fans last year to the historic neighborhood’s cobblestone streets. This year, they will instead have a “wands and wizards” family night and pub crawl and other magic-themed events — and people can still dress as their favorite characters.

Chestnut Hill isn’t the only community to receive cease-and-desist letters from the entertainment company. Festival directors around the country, including in Aurora, Illinois, and Ithaca, New York, were also told the new guidelines would prohibit much of the Potter-themed activities, which are typically free events.

It’s all about protecting the trademark.

“Warner Bros. is always pleased to learn of the enthusiasm of Harry Potter fans, but we are concerned, and do object, when fan gatherings become a vehicle for unauthorized commercial activity,” the company said.

Fans of the Philadelphia festival took to Twitter to try to get J.K. Rowling to help save the festival. A spokesperson for the author said she has no comment.

Ithaca’s “Wizarding Weekend” grew from a small celebration in an alleyway in 2015 to a full-fledged Potter-fest hosting over 20,000 fans last year, said Darlynne Overbaugh, the festival’s director. Warner Bros. sent her a letter in February.

She said she understands the company’s need to protect the franchise, but she felt like her festival was helping to build it.

“I have a lot of disappointed people because there are certain aspects of the festival I’m no longer able to do,” she said, like Sorting Hat demonstrations. Her group is committed to still providing a magical experience, she said, even if it is one-that-shall-not-be-named.

“Magic existed before Harry Potter, and you can’t put a trademark on enthusiasm and creativity,” she said.

The festival crackdown is hardly the first time Warner Bros. has put the Avada Kedavra on Potter-themed fun. A woman in the U.K. was sent a cease-and-desist letter over a 2003 Hogwarts-themed dinner party she planned, with a guest list around 30.

And a Los Angeles bookstore called “Whimsic Alley” was sued by the company over its overtly Hogwarts-ian wares, from chocolate frogs to Gryffindor scarves. They settled but the store ended up closing last year. The opening of Wizarding World at Universal Studios Hollywood worked as a killing curse for the mom-and-pop shop.

“They are acting like the Dursleys,” said the 34-year-old yoga teacher and bookkeeper. She said they should be encouraging communities to bring Harry Potter to life. “Creating interest in the franchise would increase revenue,” she said.

Companies are always concerned about protecting their trademarks, said Gregory Mandel, professor of intellectual property law at Temple University. Warner Bros. has made a business decision to prevent these festivals from having any apparent association with them, and to prevent any possible profiting off the series, he said.

“Obviously one could argue that is the wrong business decision and that by having these informal pop-up festivals, it makes all the Harry Potter fans more enthusiastic and more likely to go to the movies and theme parks,” he said.

Lorrie Kim is a member of the Potterdelphia club and a huge Snape fan, and said she feels “disappointed and grim” to lose the festival.

“Seeing the throngs of families of all ages enjoying the festival together, all agreeing to suspend their skepticism for the day and believe in magic, is an experience that can’t be manufactured,” she said. NVG