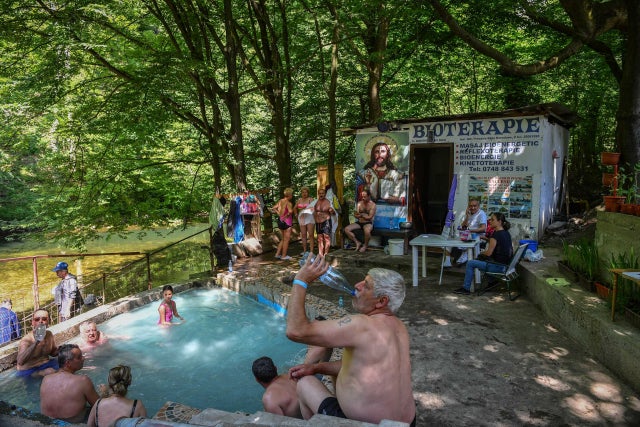 In a spa town nestled near Romania’s border with Bulgaria and Serbia, Oana Chirila puts on her hard hat and gets down to work with a dozen other young architects to try to save their country’s heritage.

Some of the precious architectural gems they are striving to restore bore witness to centuries of Romanian history and the crowned heads who ruled it through the ages.

Yet their sheer longevity has left many needing more than just a little tender loving care, which Chirila and her team have resolved to supply as they beaver away in a vaulted, once sumptuous hall at the heart of the charming but down-at-heel imperial Herculane Baths resort.

Chirila has embarked on an ambitious project to restore luster to the crumbling, neglected baths complex, built between 1883 and 1886, which has suffered from a combination of official apathy and unhappy privatization.

“We must start off with urgent measures to rule out the threats and consolidate the building,” says student architect Chirila, who hopes local authorities will help raise the 100,000 euros ($118,000) required for the first tranche of restoration.

Described by the Austrian Emperor Franz Joseph I as “Europe’s most beautiful spa resort”, Herculane was already a favorite spot of the Romans, who were fans of the “miraculous” benefits of its thermal mineral waters, historian Dorin Balteanu told AFP.

Equally charmed by the picturesque mountainous surroundings was Empress Elisabeth, nicknamed Sisi, who made several visits during the 1880s to try to cure her rheumatism in the curative waters and enjoy long walks.

According to local legend, a tired Hercules, the Roman hero, once came to the valley, where he enjoyed a bath and a rest, hence the resort’s name. A big bronze statue of him stands in the center.

Neglected during the communist era, thousands of architectural gems all over Romania have fallen prey to real estate developers, who local activists accuse of having made huge profits by pulling them down and building glass and steel high-rises instead, often with the approval of local authorities.

At the Herculane Baths, several symbols disappeared under the communist regime, including statues of Romanian kings.

And today, it’s hard to imagine the former imperial grandeur of the Franz Joseph era from looking at the rusting pipes, cracked walls and fractured red marble that once covered the around 30 thermal pools.

Yet, says Balteanu, tourists are still drawn here, despite the controversial sale in 2001 of a sizeable stake in the resort to a company owned by businessman and politician Iosif Armas on the understanding that it would invest to restore the buildings.

Armas is now awaiting trial on an embezzlement charge linked to the deal.

A former town mayor has also been charged with corruption in connection with the case.

Chirila is hopeful her project will bear fruit.

“Doing nothing is unthinkable. If we don’t manage to save Herculane, a part of our identity will be lost forever,” she warned.

At the eastern end of the country on the Black Sea, another architectural gem, the Constanta Casino, an emblematic Art Nouveau monument from the early 20th century, is crumbling away.

Built at the start of the last century by Daniel Renard, an architect of Swiss origin, the site won the admiration of Russia’s Tsar Nicholas II on a visit in 1914.

Today, the rafters are home to nesting pigeons who flutter around the chandeliers, while the marble floor and elegant sweeping staircase are covered in the birds’ excrement and feathers.

“We have been trying to find a viable solution for more than 10 years to restore this building to its former glory,” says Constanta mayor Decebal Fagadau.

In 2007, an Israeli company agreed to a concession deal to modernize the casino.

But four years later, the contract was annulled by the Constanta town hall without a cent of investment having been forthcoming.

As the town hall and the government quarrel about what to do next, an association of young Romanian architects, Arche, has resolved to intervene.

They have had the casino placed on a list of seven most endangered sites collated by heritage group Europa Nostra.

“The European experts will propose solutions for the casino’s restoration to the town hall,” architect Daniela Costea told AFP.

In the interim, Arche is organizing concerts and lectures to encourage residents to “reappropriate” and make use of the site.

The 1990s, which witnessed real estate speculation on a massive scale, were a “disaster” for historic buildings, Berza said.

But she said she was encouraged by the ongoing mobilization of support to save the country’s heritage.

Whereas architectural heritage was for too long treated as a “cultural Cinderella”, today it is more “a Sleeping Beauty, which is just waking up,” Berza said. NVG