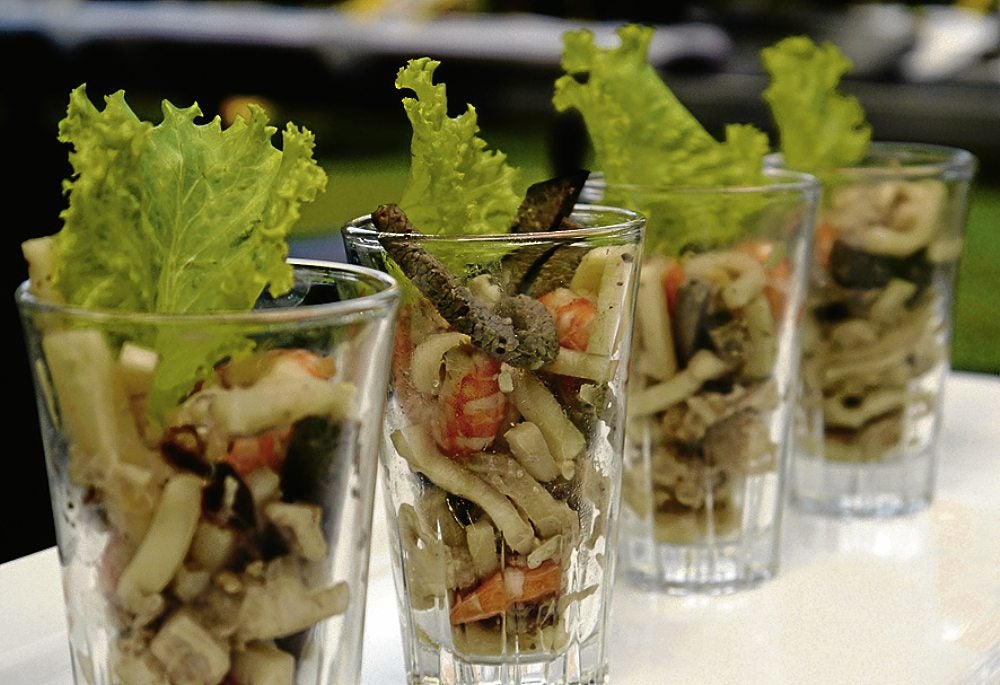 LUMPIANG hubad made of ubad or banana pith

So, this is the way piaya is done, I told myself as I watched students take flour, lard, salt and water, and knead those to become the crust. Included was more lard and flour, a mix the recipe indicated as polvoron that was added as well to the kneading.

Later a filling composed of muscovado and flour, mixed with water and flavored with calamansi and sesame seeds was placed inside a portion of the crust mixture. A rolling pin created the familiar round pieces.

I hoped that the outcome would be thin, crisp but chewy piaya, my preference.

That was just one of the traditional food at a competition called Tabuan: The First Western Visayas Ilonggo Heritage Cooking. Organized and produced by Rafael Jardeleza, the contest was held at the garden area of Esca, a restaurant in Iloilo City. Tents made the contestants comfortable and each group had their equipment of choice. So for the group producing ice cream, there was the hand-operated churner. Steamers were certainly needed for the tinuom nga manok, chicken wrapped in banana leaf pouches.

What was unique about this competition was that the mentors participated in the cooking and that each group had to cook not only for the judges to taste but also for about 200 guests at dinner. The guests were also asked to give their votes for best meal that include appetizer or soup, main dish and dessert or rice cake. Each of the courses had to be traditional Ilonggo food.

While the contest was going on, guests could watch barquillos being made by one worker from De Ocampo’s. Bibingka makers cooked their specialty on site. Guimaras mangoes were for sale.

After about five hours the dishes were brought in to be judged.

Aklan State University with Josephine Pajo as mentor had nilagpang nga bangrus as soup, deboned milkfish with tomatoes and onion and its leaves with broth from ordinary boiled water. Main dish was tinuom nga manok, a specialty of Cabatuan town in Iloilo where there is a festival just for the tinuom, chicken pieces steamed in banana packets. Last dish was very simple suman made of sticky rice and served with julienne mango.

La Consolacion College in Bacolod with its mentor, Benedict John Uy, did piaya for its rice cake. Their soup was alugbati na may gusok sang baboy, Malabar night shade with pork ribs, including other vegetables like tomato, eggplant, squash and string beans. Main dish was sarsiadong bindongo (ox tripe) that at first glance was like callos but had other flavors as well of lemon grass and pineapple juice.

University of San Agustin in Iloilo under Ramlo Villaluna had lumpiang hubad which means a spring roll without the wrapper where the main ingredients included group pork chicken liver and ubad, the pith of banana.

Kalderetang kambing (stewed goat) was marinated first in Cerveza Negra and with the liver spread which seems de rigueur in all kaldereta dishes. As ending there was inday-inday, the Ilonggo version of palitaw, ground sticky rice with coconut milk cooked in boiling water where it rises to the top when done and then topped with a combination of muscovado, buko strips and calamansi zest.

It was funny how the judges and the guests voted for the same winners-St. Therese and Colegio del Sagrado Corazon de Jesus Culinary, first and second, respectively. They topped the others in taste, most of all, and then in presentation. Miner del Mundo of St. Therese, especially, is an experienced competitor having led his team to top places in many culinary contests all over the country.

All the contestants, however, have to be commended for managing to cook for 200 dinner guests. Perhaps some of our contests can consider doing the same thing, a real test of skill and for the guests, a delicious way to participate even if they have to pay for it.

E-mail the author at pinoyfood04 @yahoo.com.