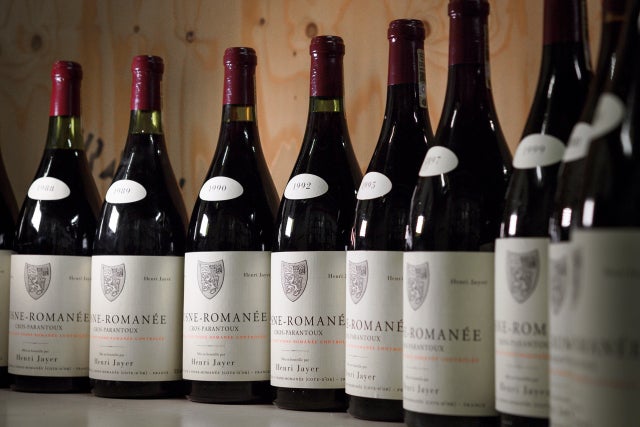 In all, 1,064 bottles went under the hammer at the Baghera Wines auction at a gourmet restaurant in Geneva. Image: AFP/Fabrice Coffrini

Last of the Jayer wine sold for 30M euros

The last batch of late legendary winemaker Henri Jayer’s Burgundies — which include some of the world’s most expensive wines — was sold for a mouth-watering 30 million euros ($35 million) in Geneva on Sunday, well in excess of the estimated price.

In all, 1,064 bottles went under the hammer at the Baghera Wines auction at a gourmet restaurant in Geneva.

They included Cros-Parantoux Vosne-Romanee Premier Cru, which ranks among the world’s priciest wines.

“Everything was sold and each one of the lots was extremely well bid” in an auction that lasted six and a half hours, said Emilie Drouin, spokeswoman for the Baghera Wines auction house.

The 855 standard bottles and 209 magnums, dating from between 1970 and 2001, were from the personal wine cellar of the man broadly considered the king of the Pinot Noir variety of grape.

Originally, their estimated price had been set at between 6.7 million and 13 million Swiss francs (5.7-11.2 million euros).

“These bottles and magnums from his personal reserve were a bit like his laboratory… A way to see his vintage wines age over the years,” his daughters Lydie and Dominique Jayer, wrote to AFP in an email prior to the sale.

“It was natural for us, since we could not drink all of these bottles, to offer them up for sale so that wine lovers… could buy them and drink them, in his honour,” they said.

The daughters were present at the auction.

“Emblem of the Burgundy”

Frenchman Henri Jayer, who died in 2006 at the age of 84, established a name for himself in the 1970s, when specialized wine reviews ranked his wines among the best in the world.

Over the years, he became “the emblem of the Burgundy in the eyes of the public,” Swiss wine critic Jacques Perrin, who knew Jayer personally, told AFP.

A Henri Jayer wine has “all the grace of the Pinot, the slenderness, the structure, the aromatic finesse. He did everything to preserve that,” he said.

“The great force of the Henri Jayer wines, when you have the chance to taste such wine, is really the fruit, (which) has just an incredible elegance and finesse,” he told AFP.

It is this quality that has made Jayer’s wines some of the most sought after in the wine world — and brought them their sometimes astronomical price tags.

Even before the auction, the original price estimate of between 6.7 and 13 million francs had raised eyebrows in the business.

“I’m not sure it is really worth the price,” Perrin had said beforehand.

He said the price reflected “the speculation effect, which is undeniable,” but also “the collector effect,” spurred by an eagerness to acquire “this last vestige of a heritage, almost a relic.”

Ganne meanwhile explained that “buyers of this kind of wine are generally fairly well-known collectors,” predicting that a number of Asian, American and some European wine auction regulars would show up.

Each bottle is equipped with a seal that guarantees its traceability and authenticity.

Jayer’s daughters meanwhile hope the bottles’ new owners will not just leave them in their cellars to gather dust and value.

“We hope they will go into the cellars of wine lovers who know how to open and drink these wines,” they said.

“Let’s not forget that wine is synonymous with sharing, and these wines were above all made to be drunk and enjoyed.” CC