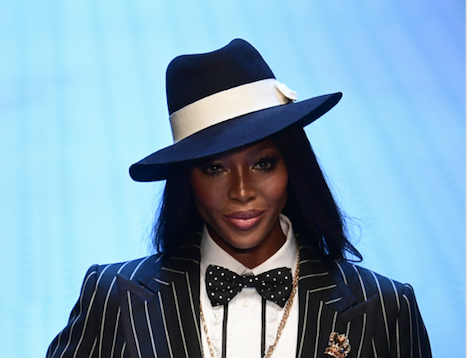 With an over-the-top gilt and baroque decor glittering in the background, the 48-year-old Campbell was a vision from top to bottom from her elegant black hat with a white band to her sparkling silver heels.

Bellucci showed off a three-piece coal black suit with a wide lapel, teetering on vertiginous heels with her hands in her pockets.

The younger models were heartthrobs of the Millennials — a target group for the house — including actor Cameron Dallas, Chinese singer and actor Karry Wang and Kailand Wander, the son of US music legend Stevie Wonder.

Apart from Campbell and Bellucci’s suits, the other offerings bore the quirky, sassy D&G stamp: suits encrusted with precious stones or layered with dazzling silver and gold embroidery that the maison put down to a “Gothic inspiration”.

Trousers were in plaid and shorts were both baggy or tight and some were asymmetrical. There were letter box red cardigans emblazoned with a crown and Donatella Versace said the collection catered to three kinds of men: a “street style” for stars, another for dandies and a third for “leaders.”

“The Versace man is not ordinary, he is watched and spoken of,” she said.

Milan will showcase 28 ready-to-wear collections to reveal the Spring-Summer 2019 lines.

Among the major Italian names showing between now and Monday are Versace, Dolce & Gabbana, Prada and Giorgio Armani.

McCartney is returning to Milan after a four-year absence and will close the fashion week on Monday evening. CC

Proudrace’s advice for Mocha Uson’s hair: ‘Do it like Naomi Campbell’