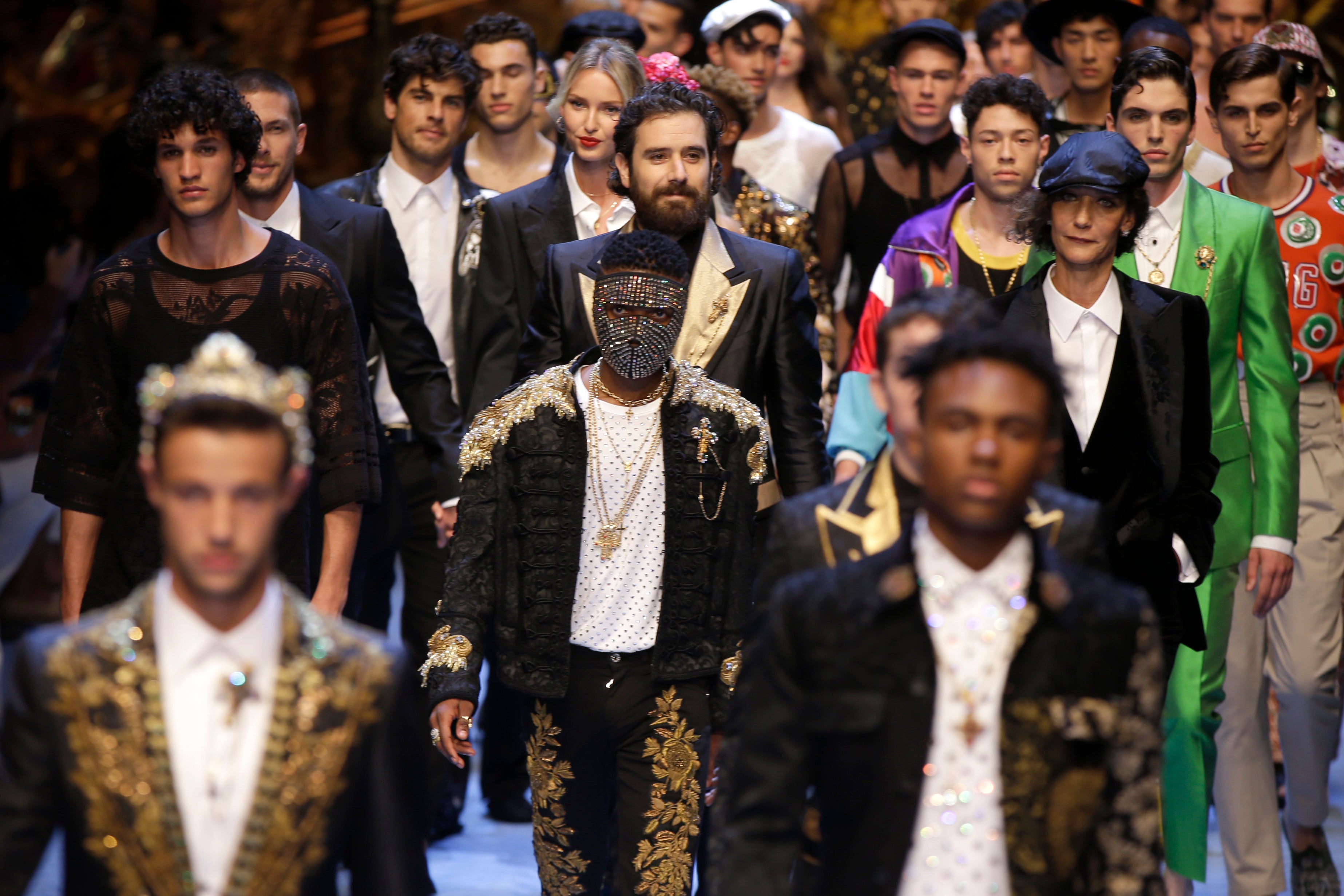 From Missoni to Dolce&Gabbana, Milan men bask in street wear

MILAN (AP) — Milan designers continue to cast their eyes toward Millennials with a focus on street wear — but without giving up tailored luxury and technical innovations.

Menswear collections for next spring and summer were being shown Saturday during the second day of Milan Fashion Week. The focus is increasingly on elements that can play up into office looks or down into casual street wear, using the same basic building blocks. The approach allows the designers to reach across generations, geographies and income levels.

“Street wear is a way of dressing,” said Angela Missoni, creative director of the eponymous fashion house founded by her parents. That is to say: it is not delivered as a finished outfit, but a look that can be created from elements on the runways.

Here are some highlights from Saturday’s previews, including Missoni, Dolce&Gabbana, Versace and Plein Sport.

The Missoni man is finishing a trek from Europe to West Africa, Paris to Dakar. His looks range from soft-tailored suits in a cotton-wool blend to rugged hand-painted leather pants with a slightly degraded feel. They were paired with nylon windbreakers layered with a breathable, sporty nylon ripstop jacket that blocks the sand.

Menswear designer Mayur Ghadialy said the knitwear brand is increasingly including non-knitwear fabrics in collections, knowing that “too many layers of knitwear can get bulky.”

Missoni’s quintessential soft-tailoring came through in a double-breasted suit and pants made from a pure cotton knit-weave hybrid. It was layered with an elongated mesh T-shirt under a polo shirt.

The tribal feel came through in alternating geometric patterns or ethnic borders on light-weight tops that were oversized for a comfortable tunic vibe. Patterns on viscose shorts and tops and loose pajama tops were reminiscent of tire tracks in the sand.

Donatella Versace is looking to dress a man whose masculinity is challenged by neither lace, nor neon nor florals.

The Versace man is ready to work in a double-breasted pinstriped suit but leaves the shirt unbuttoned to show off a Versace T-shirt that reads like Tabloid newsprint. The headline: “Versace finally speaks out.”

The flash soon followed, with shiny red snakeskin coats over mid-thigh shorts and Versace newsprint tops. Boxy jackets with flat pockets were worn with matching shorts, dressed up with a woman’s cross-body bag.

Men wore sheer tops over legible T-shirts, lace detailing on military-style knitwear and floral print suits with buttons left open to show off necklaces and belly-button jewelry. Flashes of neon green and orange closed the show, in knit sleeveless tops that show off a man’s hours at the gym. The bright footwear included the Versace Chain Reaction sneaker.

“The Versace man is the center of all the attention,” Donatella Versace said in notes.

The menswear runway was punctuated by corresponding looks for women, including model Bella Hadid in a snug leather mini with form-accentuating ruffle accents and Kendall Jenner in a body-hugging floral mini with thigh-high boots.

Creative director Angela Missoni was still beaming the day after announcing a 70 million euro ($81 million) investment by an Italian state-backed fund to help secure the future of the family-run brand founded by her parents 65 years ago.

“I feel very proud to have done this for my mother. I think I accomplished my mission,” she said.

Missoni said plans include expanding menswear, now 10 percent of the brand’s turnover, to its former equilibrium with womenswear and adding accessories like bags and footwear, now absent from the lineup.

The most important move the brand will make strategically is to expand its retail presence into China, which she said is forecast to be 50 percent of the global luxury market in the coming years.

The deal allows the family to retain control while ushering the third generation into management as they head for an eventual public listing. Missoni, who remains creative director and chairman, said that was probably five years away.

Her mother Rosita retains her position as honorary chairwoman, while one of her nephews, Giacomo Missoni, enters the board alongside her brother, Luca Missoni.

Angela Missoni said she was struck by the positive reaction to the news that the knitwear brand had reinforced its position with Italian investors.

“I understood in that moment that we are like the Colosseum. We are a piece of history. We are a point of national pride,” she said.

It was bring on the bling at Dolce&Gabbana, where the designing duo explored the brand’s DNA with turns by some of the brand’s historic models — Naomi Campbell, Monica Bellucci and Marpessa Hennink — decked out in sleek men’s suits.

Designers Domenico Dolce and Stefano Gabbana created menswear looks that ran the brand’s gamut from suits for daytime that were still tightfitting and sexy to glammed-up versions in bright sequins. There was loud beach and resort wear that featured colorful bursts of prints or black-and-white logo plays, and geek looks in sandals with socks and a beanie.

To underscore the brand’s broad reach, the designers filled the runway with Millennial influencers, real-world royals and aristocrats, singers and performers but also ordinary people: elderly women out for a stroll in bold primary prints, homosexual couples and a family with children.

Dolce&Gabbana under the hood

The designing duo kept up a recent tradition of nominally “secret” runway shows, this round showing off a range of branded briefs on well-toned models.

There was something for everyone, from classic white briefs to stretchy boxers to undergarments printed with Sicilian ceramic designs of blue and lemon yellow, for anyone who cares to match their underwear with dinner-ware.

Models carried an array of bags from leather weekenders to fanny packs to adventure bags to brief cases.

Audacious German designer Philipp Plein marked his return to Milan after a year’s absence with the announcement of a deal with the AS Monaco Football Club as the official fashion sponsor.

Details will be forthcoming. But Plein said his brands — Philipp Plein, Plein Sport and Billionaire — grew 25 percent last year and he forecast 15 percent to 20 percent growth this year.

Plein Sport looks for the season focused on tennis wear, with cute pleated skirts, tennis shorts and V-striped polos accompanied by every manner of accessory, from sweatbands to rackets to visors. CC