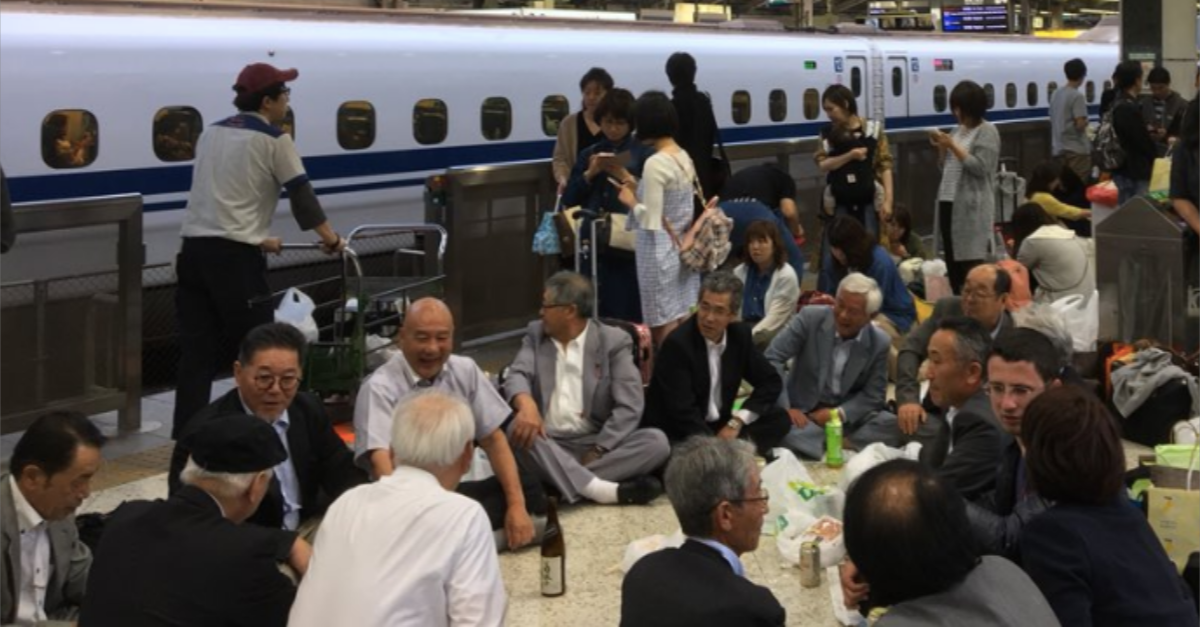 If there’s one thing the Japanese are known for, it’s their serious take on train punctuality. Even a few seconds of delay calls for an apology. But what will happen if this delay stretched to say, an hour — or more precisely, nearly six hours?

This is what the Japanese travelers taking the Tohoku Shinkansen bullet train at Tokyo Station experienced last Sunday, June 17. A series of Tweets from these commuters trended after the world saw how these Japanese travelers reacted to the train delay — by holding a drinking party and a gymnastic performance.

One netizen, @Thrill_Junky, shared via Twitter a photo of the stranded commuters sitting on the station’s platform while drinking alcoholic beverages. Considering that there is no Japanese law forbidding public drinking, these travelers chose to consume their cold alcoholic drinks right there in the station, rather than idly wait for the train to arrive while their drinks get warm.

According to his post, there was pandemonium on the platform due to the delay, which led to people staging the drinking party after they’ve “given up.”

Meanwhile, stranded commuters in Hachinohe Station of Aomori prefecture witnessed a gymnastic performance as reported by SoraNews24 on Monday, June 18. The performance was courtesy of the male rhythmic gymnastic students of Natori High School who were stranded as well.

One of the members of the gymnastic team, @Ms_mickey7711, shared a part of their performance in a video uploaded on Twitter. In the post, @Ms_mickey7711 dedicated the performance to the tired people at the station, then thanked them for watching.

The delay was caused by a bird strike on a train running in Miyagi prefecture at around 1:56 p.m.. This in turn caused power loss on a train running between Sendai and Furukawa stations, according to East Japan Railway Company (JR East), as reported by The Mainichi Shimbun on Monday, June 18. The said train had to make an emergency stop and get safety-checked for nearly six hours.

As per report, the Tohoku Shinkansen resumed its services by 7:20 p.m. Kate Matriano/JB

Holy rap! ‘Funky’ Japan monk gets grannies in a spin