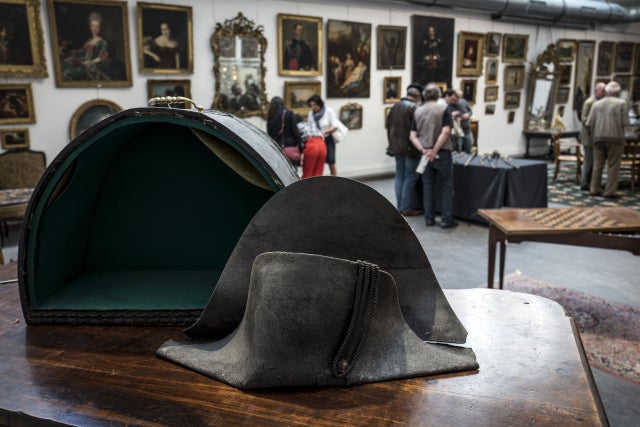 The distinctive "bicorne" hat, which Napoleon wore sideways -- rather than with points at the front and back -- so he could easily be spotted on the battlefield, has long been attributed to the emperor, with records confirming its ownership since a Dutch captain took it as a war trophy after the battle of Waterloo in 1815. © JEAN-PHILIPPE KSIAZEK / AFP

A two-cornered military dress hat thought to have belonged to Napoleon went for 350,000 euros ($406,000 or around P21.6 million) at auction on Monday, the latest sale to highlight the boundless appetite for all things associated with the emperor.

The final price far exceeded the expected 30,000 to 40,000 euros for the distinctive “bicorne” hat, which Napoleon wore sideways—rather than with points at the front and back—so he could easily be spotted on the battlefield.

The identity of the buyer was not disclosed.

“There’s a sort of craze going on with historical souvenirs, in particular those from Napoleon,” Etienne De Baecque, the auctioneer leading the sale in the eastern city of Lyon, told AFP.

Yet despite details suggesting the hat is one of about 120 the “Little Corsican” went through during his 15 years in power, there is no conclusive proof it belonged to him.

Most of them were made by the French hatmakers Poupard in black felted beaver fur, though only a handful of confirmed examples still exist.

“There are some distinctive elements: Napoleon hated the internal band so he always had it removed,” as is the case with the model sold Monday, De Baecque said.

It has long been attributed to the emperor, with records confirming its ownership since a Dutch captain took it as a war trophy after the battle of Waterloo in 1815.

The auction house said the hat was sold with the box used for its display at the World Expo in Brussels in 1897.

It had passed down through the captain’s family until the end of the last century when it was sold to a French collector.

Monday’s sale still fell short of the 1.9 million euros paid for a Napoleon bicorne four years ago—part of a prestigious collection auctioned off by Monaco’s royal family—to the owner of the South Korean food and agriculture giant Harim.

Demand for all things Napoleon has often sent prices spiraling well above estimates.

Last November a fragile gold laurel leaf from the crown made for Napoleon’s coronation in 1804, weighing just 10 grams, was sold for 625,000 euros. MKH