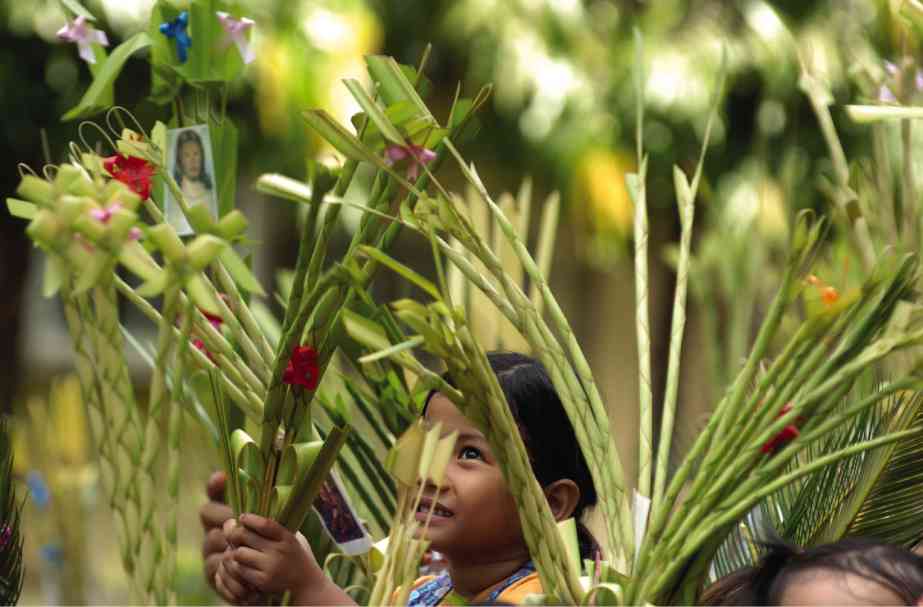 ON Palm Sunday, there will be brisk sales of the palaspas (palm frond) in church yards. The original intention here was to commemorate Jesus’ triumphant entry into Jerusalem, with crowds throwing their cloaks, as well as palm tree branches, on the road to honor Jesus.

Folk Catholicism has modified this, with many Filipinos buying the palaspas to tack on doors and windows to ward off harm –from burglars to evil spirits.

I buy the palaspas more out of a fascination with woven folk crafts. We often think of woven crafts as baskets and mats and forget that the palaspas is woven too. Not only that, it turns out that there are many more crafts woven out of palm besides the palaspas.

The summer months mean trips to Antipolo and buying suman, rice cakes wrapped with palm leaves. As a child, I used to think of these as mummified suman. Today, I marvel not so much at the wrapping around the suman than at the way they tie four suman together and consider that as one “tali” (literally, one tie). Four tali (or 16 suman in all) is how most sellers package the stuff at P100 each.

Beyond the palaspas and suman mummies, there’s a whole world out there of palm art, and we can thank Elmer Nocheseda, an economist turned self-taught anthropologist and cultural historian, for compiling the knowledge and skills in a book published in 2009 by Ateneo de Manila University Press: “Palaspas: An Appreciation of Palm Leaf Art in the Philippines.”

Elmer writes in the book about how, at age 4, his father had taken two green coconut leaflets and fashioned them into a ball. That was where his fascination with palm art began, growing through the years as he discovered how palm leaves were being used throughout the Philippines as food wrapping and carriers or containers (in Pateros, they have a way of using the palm leaves to pack salted eggs with tomatoes!), toys, décor and of course religious objects.

The most common palaspas is called an arko because the base has several arches. But another kind of palaspas is called the pinuso, still with several arches toward the base but folded in a heart shape. The binanig has the base looking more like a mat and the kinurus is, as the name suggests, in the form of a cross. Then there is the palapa, which has several French braids, looking deceptively simple.

When Elmer studied in Japan, he couldn’t help but notice the similarities between Japanese origami (literally paper-folding) and Filipino palm-weaving. And while there were numerous books on origami, he could not find a single one on Filipino weaving.

Thus began his painstaking documentation of different palm crafts throughout the Philippines, as well as a few from Indonesia, where the palm leaves are used for wedding decorations and for food offerings in religious ceremonies.

The entire book is filled with photographs, the first part being an overview of the many cultural uses of palm leaves. Palm leaves, it turns out, are used for many rituals by different groups in the Philippines, from healing to supplications for bountiful harvests. Elmer writes that the palm leaves are so closely tied to animistic “pagan” rituals that some Protestant ministers are unwilling to use the word “palaspas” to refer to Christian rituals.

But as Elmer shows in the book, the palm leaves are now an integral part of folk Catholicism. It isn’t just the palaspas for Palm Sunday; in Infanta, Quezon, men wear palm skirts as part of their good Friday penitential rites!

The second part of the book teaches you to fold the palm leaves into all kinds of objects from all over the Philippines, with photographs taking you step by step. The Boy Scouts should get the book because you learn to do all kinds of knots with the palm leaves. Several slip knots, for example, gives you the lahilahipan, which can be used as headbands or bracelets.

The crafts are truly origami: you get snakes, and shrimps, and fish, and chickens, and even, on a naughty note, goat balls. The possibilities are endless, with some hints that more can be done when you look at the kinaban, beautiful boxes using palm leaves that have been dyed different colors.

Elmer has many stories of how he learned of new palm origami. In one instance, he missed the bus and ended up talking with someone who taught him to make a pinagbutasan, and learned too of a legend associated with the craft.

Elmer says that digital technologies have opened new horizons for him. He can document more crafts now with a quick succession of photographs. The Internet has meant meeting people who have their share of stories, and crafts too. Those interested in contacting Elmer can write him at [email protected] •