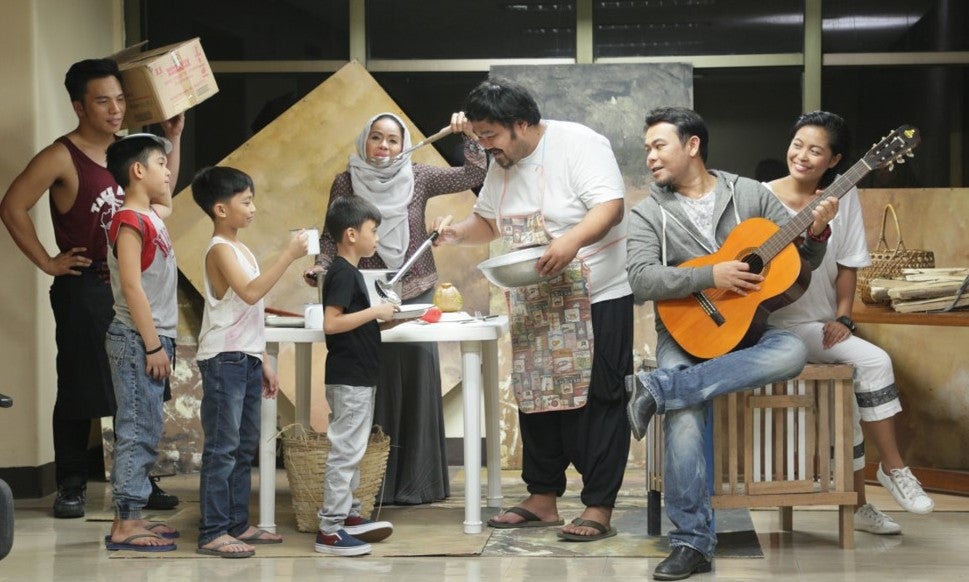 The cast of “Marawi Musicale” rehearsing; the musical play is written by Tyron Casumpang with music by Maynard Kenneth de Guzman and direction by Ariel Yonzon. PHOTO FROM CCP

While the war in Marawi was ongoing, writer Tyron Casumpang joined an aid mission by Ateneo de Manila to help evacuees who had fled to a nearby town, where a soup kitchen had been set up for them. Young Casumpang was affected by what he saw, especially by the plight of the children.

He has now written that experience into a one-act play, a musical at that, titled “Marawi Musicale,” to be presented at Virgin Labfest 14, the annual festival of fresh theater works that opens June 27 at the Cultural Center of the Philippines (CCP) and runs for three weeks, until July 15. (“Marawi Musicale” runs June 30-July 14.)

The music is by Maynard Kenneth de Guzman, with Casumpang providing the story and libretto. Ariel Yonzon, an associate artistic director of the CCP, directs. The setting is known as Kusina Mapagpapalinga, inspired by the soup kitchen which the playwright experienced.

“Marawi Musicale” has a cast of eight—five adults and three children aged 8-11. The adults are Kuya Jong (Jonathan Tadioan), the chief chef, you might say, and the main character, who tries to raise the morale of the group; a displaced Maranao (Bayang Barrios), anxious about her missing husband; her brother-in-law Khalid (Poppert Bernadas), another displaced Maranao; and the two Manilans in a relationship, Richard and Kristina (Nazer Salcedo and Lhorvie Nuevo).

The play begins lightheartedly, with the “Adobong Sitao” number, Batibot-like, a fun ride with the children. But eventually issues among the adults emerge. Salanka (Barrios) and Khalid (Bernades) have left their loved ones behind. Richard (Salcedo) and Kristina (Nuevo), music therapists for the children, have a tense romantic relationship.

And Kuya Jong (Tadioan), the protagonist, is putting up a brave front, telling everybody “Kaya natin ’yan,” with himself on the verge of a breakdown. “His aria will play to the heartstrings of the audience,” said the director.

“Although there is dialogue, the play has to be driven by the music,” said Yonzon. “I gave (composer) Maynard feedback, directions for each song, the sentiments…”

“Marawi Musicale” is just one play in a set of three plays to be presented, and it features a bigger-than-usual cast for a Virgin Labfest play, so the technical requirements for the production are challenging. But Yonzon is confident about the outcome. “I’m very happy with the cast,” he said—especially the kids who, while members of a choir in Parañaque, were disciplined and quick to absorb instructions.

The kids’ effectivity as actors is crucial. The play’s central theme, after all, is “the innocence of children,” said Yonzon. “You want to protect them from the horrors of war or displacement.”

But, while there is violence and chaos happening outside, there is also war within the hearts of the adults who are struggling with their own circumstances. In “Marawi Musicale,” as the director put it, “may digmaan sa loob at may digmaan sa labas” (the war rages inside and outside).