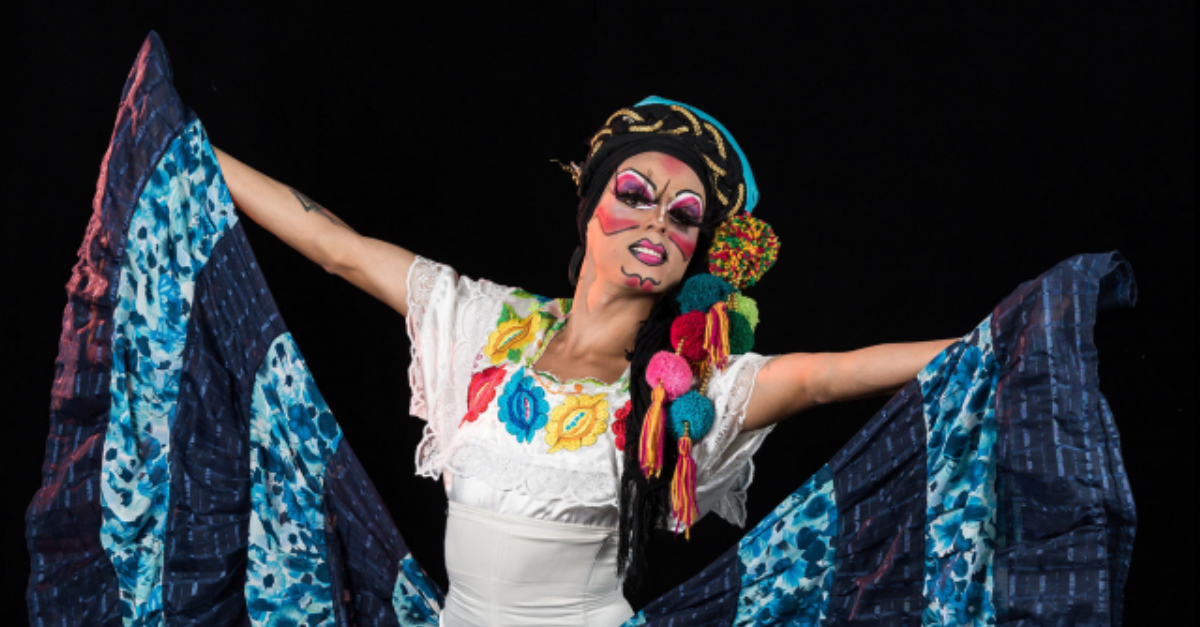 Jacob Rafael Soto of the "Mexico de Colores" dance troupe poses for a photograph during a rehearsal in Mexico City.

With a twirl of his skirt, Jacob Soto taps his strappy high-heels in time to the music, the very image of his all-gay dance company’s bold reinvention of Mexico’s traditional folk dances.

Soto first discovered the dance company, “Mexico in Color,” when he went to one of their shows. The 28-year-old psychologist says it was love at first sight.

Mexico in Color takes “ballet folklorico,” Mexico’s beloved traditional folk dance, and mashes it with the flamboyant transgression of drag.

Instead of virile men in sombreros twirling dainty women in flowing skirts around the floor, some 20 gay men play both roles, mixing the highly technical traditional steps with modern dance.

The hardest part, they say, is learning the delicate sensuality of the traditional female steps: twirling a skirt just so, floating around the floor in heels, dancing with legs together rather than apart — it all takes many hours of practice.

“The form and style of movement of a woman is very difficult for us, because nature gave us a different anatomy,” says David Reyes, 27, one of the dancers who founded the company seven years ago.

Something old, something new

It is a daring project in a country where folk dance is revered and machismo and homophobia loom large.

Antunez is also the artistic coordinator of the Ballet Folklorico de Mexico de Amalia Hernandez, the premier institution of Mexican folk dance, a renowned company founded in 1952 that has toured the world and still performs every week in the Palace of Fine Arts in Mexico City.

Although Mexico in Color is inspired by the same traditions, it is completely different, says Antunez.

“The steps dancers learn in a traditional folk school are very well written, very academic. I don’t use them. I take them and I transform them,” he says.

Antunez, who has also been a choreographer for some of Mexico’s most famous pop stars, says he wanted to stake his own claim to the folk dancing tradition.

“In folk dancing, (homosexuality) is always hidden. It’s as if gay people didn’t exist,” he says.

“But Mexican music is ours too, we’re part of Mexico and we can dance to it too.”

Mexico can be a hostile place for the LGBTI community.

At least 381 people who identified as such were murdered in Mexico from 2013 to 2017, “presumably because of their sexual orientation, identity or gender expression,” according to the rights group Letra Ese.

Except for Mexico City, a gay-friendly capital with equal marriage rights, there is “ever-growing intolerance” toward the community, creating a risk of hate crimes, according to the National Human Rights Commission.

Antunez says he prepares his dancers for the possibility they will be booed or heckled at performances. But he considers it a bright point that in seven years they have never been physically attacked.

“I think people applaud our bravery,” he says.

“You are basically telling people: there are men out there who kiss each other and are happy. This is how we are. And people simply stand and applaud.” NVG

Argentina ballet dancers protest by performing in the street