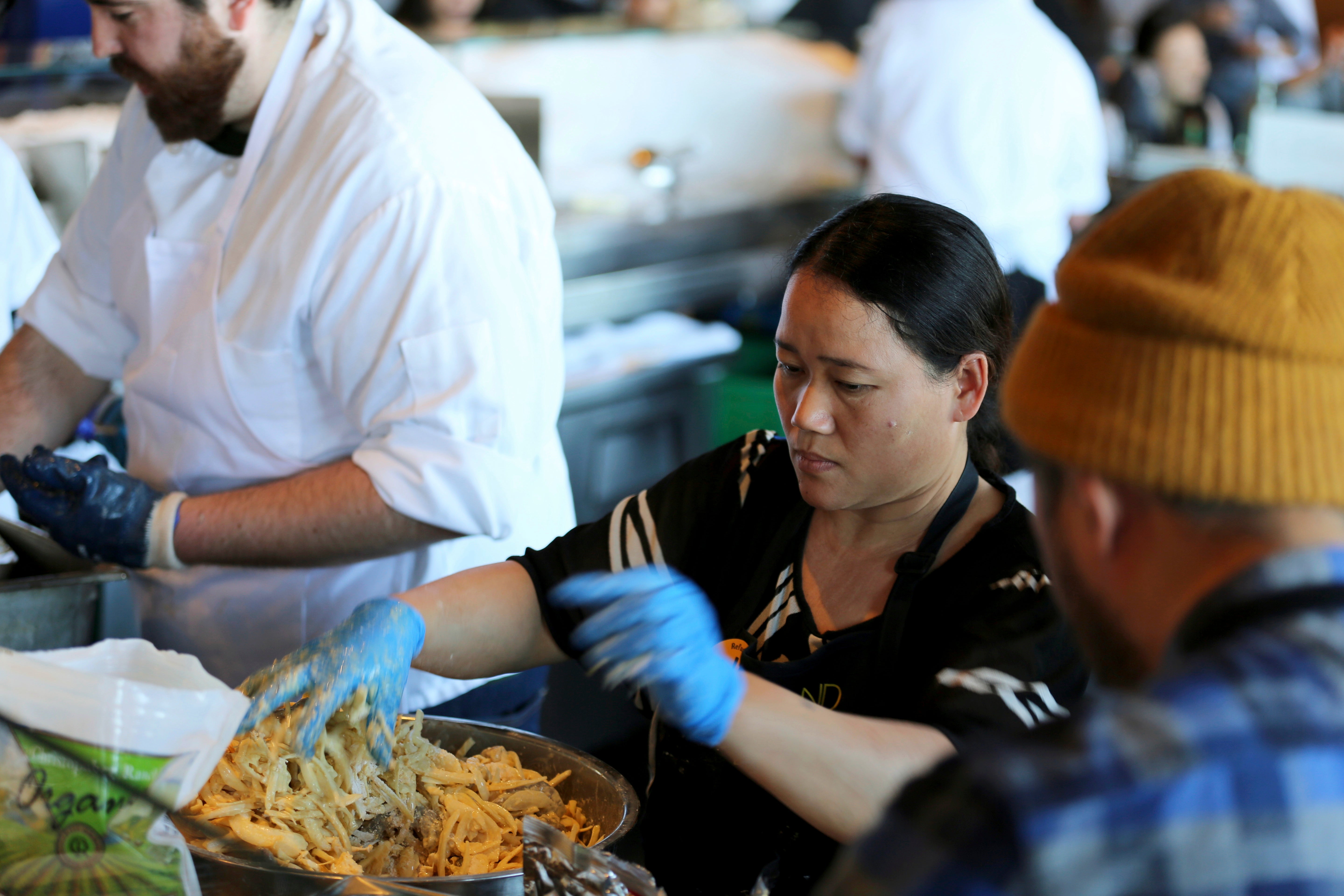 In this photo taken June 19, 2018, Pa Wah, a refugee from Myanmar, mixes shrimp in a turmeric tempura batter at the Hog Island Oyster Co. restaurant in San Francisco during the inaugural Refugee Food Festival. San Francisco restaurants are opening their kitchens for the first time to refugees who are showcasing their culinary skills and native cuisines while raising their profiles as aspiring chefs as part of a program to increase awareness about the plight of refugees worldwide. Image: AP/Lorin Eleni Gill

US restaurants host refugee chefs who offer a taste of home

SAN FRANCISCO (AP) — At San Francisco’s Tawla restaurant, Muna Anaee powdered her hands with flour and gently broke off a piece of golden dough to prepare bread eaten in Iraq, the country she fled with her family.

Anaee was preparing more than 100 loaves for diners Wednesday night as part of a program that lets refugees aspiring to be chefs work in professional kitchens.

The Refugee Food Festival — a joint initiative of the United Nations Refugee Agency and a French nonprofit, Food Sweet Food — started in Paris in 2016 and came to the U.S. for the first time this year, with restaurants in New York participating as well. The establishments’ owners turn over their kitchens to refugee chefs for an evening, allowing them to prepare sampling platters of their country’s cuisine and share a taste of their home.

Restaurants in 12 cities outside the U.S. are taking part in the program this month.

“It’s been a big dream to open a restaurant,” said Anaee, 45, who now has a green card.

Anaee was among five refugees chosen to showcase their food in San Francisco — each at a different restaurant and on a different night, from Tuesday through Saturday. Organizers say the goal is to help the refugees succeed as chefs and raise awareness about the plight of refugees worldwide.

It’s important to “really get to know these refugees and their personal stories,” said Sara Shah, who brought the event to California after seeing it in Belgium.

Anaee and her husband and two children left Baghdad in 2013 over concerns about terrorism and violence. She worked as a kindergarten teacher in Iraq, not a chef, but was urged to pursue cooking as a career by peers in an English class she took in California after they tasted some of her food.

Azhar Hashem, Tawla’s owner, said hosting Anaee was part of the restaurant’s mission to broaden diners’ understanding of the Middle East — a region that inspires some of its dishes.

“Food is the best — and most humanizing — catalyst for having harder conservations,” she said.

The four other aspiring chefs serving food in San Francisco are from Myanmar, Bhutan, Syria and Senegal.

Karen Ferguson, executive director of the Northern California offices of the International Rescue Committee, said San Francisco was a good city for the food festival.

“We have so much diversity, and we see the evidence of that in the culinary expertise in the area,” she said.

The Bay Area has a high concentration of refugees from Afghanistan, Honduras, Guatemala, El Salvador, Eritrea and Burma, though exact numbers are unclear, according to the rescue committee. Its Oakland office settled more than 400 refugees in the Bay Area last year, but the number of refugees settling in the region has fallen dramatically since the Trump administration this year placed a cap on arrivals, Ferguson said.

Pa Wah, a 41-year-old refugee from Myanmar, presented dishes at San Francisco’s Hog Island Oyster Co. on Tuesday. She said she didn’t consider a career in cooking until she moved to California in 2011 and got her green card.

Cooking was a means of survival at the Thailand refugee camp where she lived after escaping civil conflict in Myanmar as a child. Participating in the food festival showed her the challenges of running a restaurant, but also helped her realize she was capable of opening her own, she said. CC