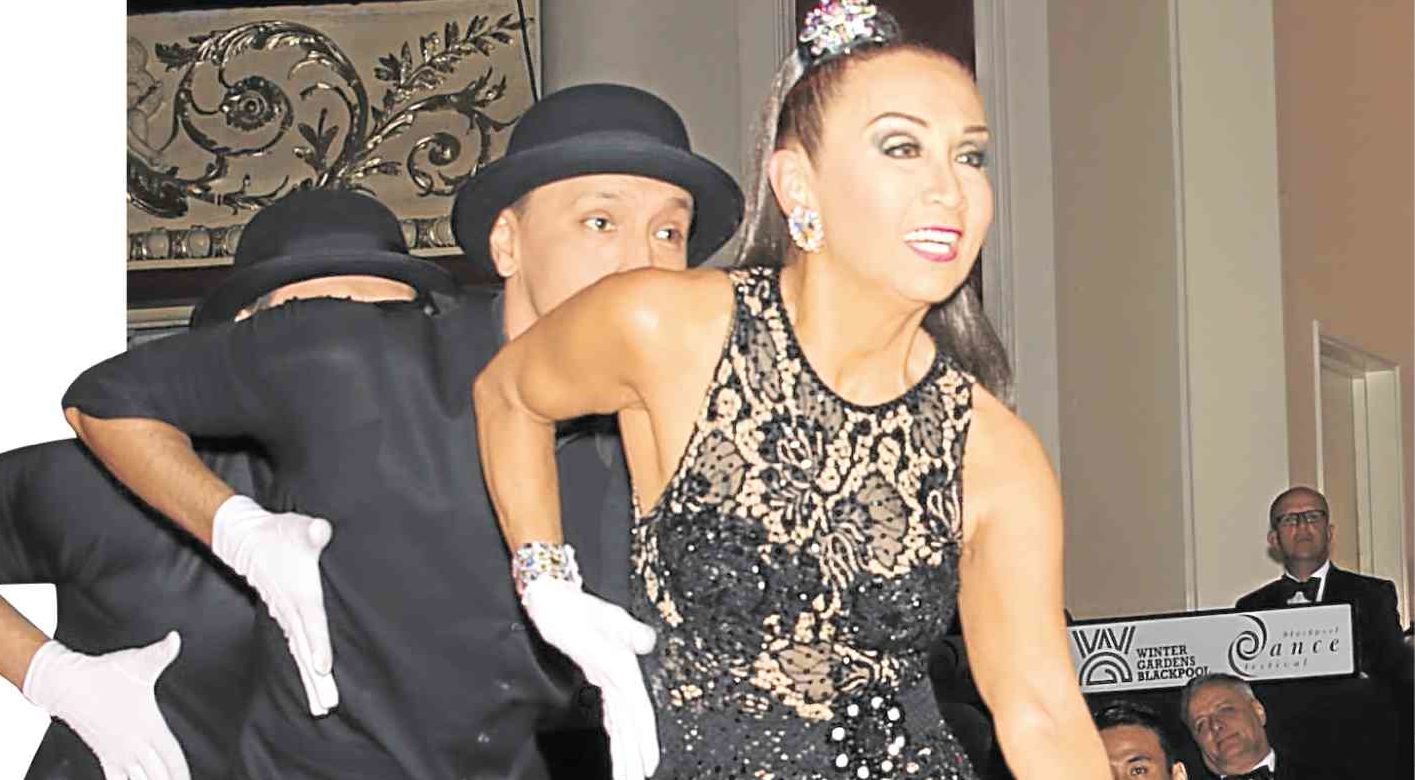 Puno mimics Bob Fosse jazz movements in “All That Jazz” at the gala night in Blackpool.

A Philippine dancer and her two partners brought the house down in a ballroom dancing contest at the Empress Ballroom in Blackpool, England.

The emcee introduced Michaela “Pinky” Puno, 69, as a “young lady” with seven children and 15 grandchildren and a history of medical surgeries.

To the audience’s amazement, Puno strutted in a sheer, black lacy jumpsuit.

“They were expecting this old lady in crutches to perform,” recalled Puno. “They were pleasantly surprised to see this sprightly lady.”

A performer who danced from the heart, Puno mesmerized the audience with Bob Fosse movements of sinewy body isolations, hip thrusts and sleight of hand, set to the music of “All That Jazz.”

“A judge told me that the guests in their table were already standing even before the music ended,” she added.

The 98-year-old festival was dubbed the Olympics of ballroom dancing.

Couples in the Pro-Am category consisted of a professional teacher and his or her amateur student as partner.

Among the eight couples who were asked to perform at the Show Dance portion of the gala show, Puno’s ensemble received a standing ovation from an audience consisting of the who’s-who in ballroom dancing. They stood out because they danced as a trio. With her were her dance partner, Ryan Jago, and her teacher Slava Sergiev.

In the past two years, Puno and Jago have been the only Filipinos among the participants at the gala night. Last year, she performed in a pas de trios with Jago and Sergiev, set to the music of “Jealousy” and choreographed by Polish dancer/ choreographer Mariusz Olszewski.

This year, she tapped Olszewski again. He paid tribute to the movie, “All That Jazz,” directed by choreographer Fosse, by incorporating some of the latter’s signature jazz styles with jive and samba.

To complete the Fosse look, they all donned white gloves that emphasized the quirky hand movements, and the men wore bowler hats. Puno put on a hairpiece in a high ponytail, which made her look 30 years younger.

Earlier during the rehearsals, the participants, the crew and organizers were wildly applauding them. Theirs was the only jazz-infused number among the waltz, rumba, paso doble, cha-cha/swing and fox-trot.

Days after their Show Dance, Puno and her team were invited to perform “All That Jazz” at The Nevada Star Ball in August, organized by seven-time World Latin champions Carmen and Bryan Watson with Hans Galke and Sam Sodano.

They were also invited to the Open World Championship in Paris, organized by Donnie Burns, president of the World Dance Council, and Sammy Stopford and Barbara McColl, both four-time Blackpool Latin champions.

Although their performance at the Show Dance of the gala night was the highlight of Puno’s Blackpool event, she also competed in two categories—
American Smooth in the Pro-Am division with Sergiev, and Latin (cha-cha, samba, rumba, paso doble) with Jago in the Latin Senior (35 and over).

In Pro-Am American Smooth (waltz, tango, fox-trot, Viennese waltz), she and Sergiev made it to the Top 6. She was also the oldest in the 60-70 years division. Likewise, she was the oldest in the Latin Division of the senior event for dancers over 35 years old.

“I competed with women who were younger than my daughters! There were about 75 couples and we were ranked No. 37. I consider it a feat being called back to the next round!” she said.

Training for the Blackpool event was intense and expensive. Puno underwent daily practice of five hours every day for the two categories and an extra hour for rehearsing “All That Jazz.”

On her longtime partnership with Jago and Sergiev, she explained, “Ryan Jago is a past National Amateur Latin champion of Dance Sport Philippines and the youngest alumnus awardee of University for the Arts. Slava Sergiev is a former 10-dance undefeated champion of Belarus. They are consummate professionals and I have absolute trust and respect for them. There is no outbursts of frustration. They know my limitations because of my past surgeries of my hip and knee replacements.

“Yet, they push me to keep excelling. There is always positive reinforcement. Sometimes when I am having difficulty with a step, I remind them about my age, but of course they don’t buy that excuse,” she said.

“When I make a mistake at a competition, they don’t berate me like other teachers/ dance partners do. They gently remind me how to avoid the mistake.”

She added that Jago and Sergiev have acquired the discipline and decorum of dance—from putting the lady in the limelight to everyday gestures such as opening doors and making her feel safe.

“They make me feel like the leading lady. The most important part of our dynamics is the blend of teamwork and friendship. Our professional relationship is built around kindness, sensitivity, compassion and a great sense of humor. These are the building blocks to our success.”

Continuous learning is Puno’s elixir of youth. “Even if my flexibility is gone and my hip movements are more limited, I am constantly training. I see improvement in the quality of my dancing, thanks to the drilling from my partners. I have been getting better through the years as I put more meaning into my dances. Every step has a reason, every dance has a story.” —CONTRIBUTED