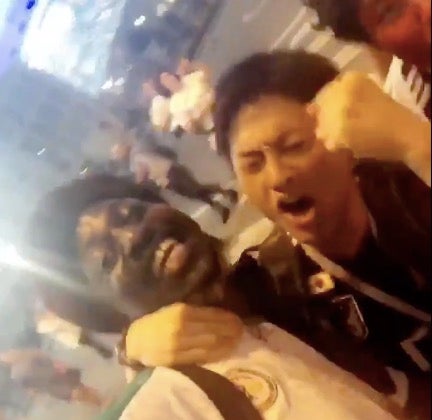 Soccer fans went home smiling as they sang the opening theme for popular anime “One Piece” after the Japan-Senegal match.

A curious and heartwarming exchange of culture happened after the FIFA World Cup 2018 match between Japan and Senegal on June 24. Despite the scores being tied at 2-2, several fans happily exited the stadium singing the opening song “We Are!” from the popular series “One Piece.”

Twitter user John Sulo (@JohnSulo) tweeted a video clip of this extraordinary moment on June 25. The video has since gained over 3 million views as of this writing.

In the video, Sulo could be heard and seen singing the anime song with Japanese soccer fans. Fists high in the air, they belted out the lines enthusiastically and even draped their arms over each others’ shoulders as if they’ve been friends for a long time.

At the end of their singing the fans eventually parted ways. Sulo shouted “arigatou” or “thank you” to the Japanese group while they gave him happy pats on the shoulder.

Apart from exporting their culture to the world via anime, Japanese soccer fans have begun to influence the World Cup fandom. Japanese soccer fans have always been known to clean up after themselves since the 2014 World Cup in Brazil. However, their historic win over Colombia last June 19 highlighted the behavior and influenced fans from other countries to take up the practice.

Senegalese fans were seen picking up trash from the benches after the game with Japan. Meanwhile, the Saudi Arabians did the same and cleaned up the seats after beating Uruguay 2 to 1, according to a report by Japanese outlet Jin via SoraNews24.

Twitter user Mariana J. Rodriguez (@mariana4589) shared a video of fans on the Saudi Arabia and Uruguay side of the stadium picking up trash under the seats on June 21.

After the Colombia-Japan match, one Colombian fan uploaded a video wherein he expressed admiration for the Japanese fans as they picked up trash around the stadium seats. The video has since spread to various social media platforms including YouTube.  Alfred Bayle /ra

Chinese neighbors team up to rescue girls from burning apartment