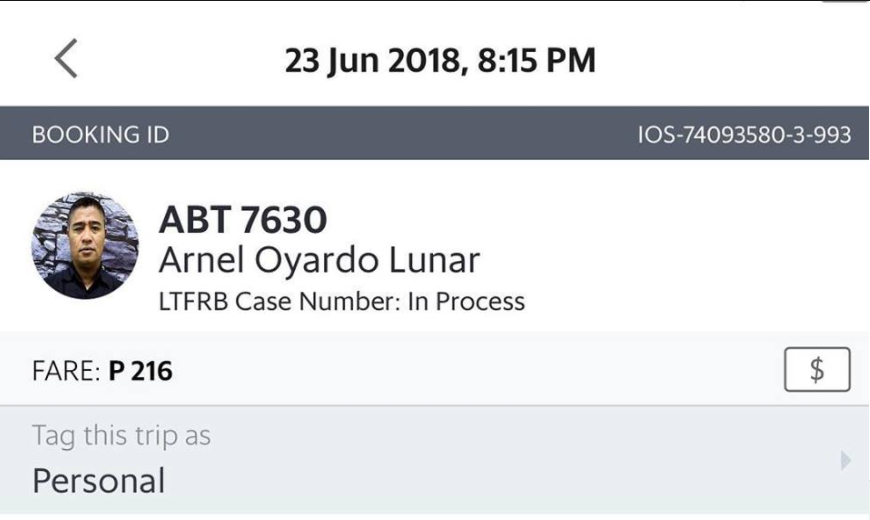 Katrina Tolentino was inside a Grab car and on her way home to Parañaque last Sunday, June 24, when she felt that she was having a heart attack. Level-headed and calm, Tolentino turned to her Grab driver, a man named Arnel Lunar, and told him to bring her to the hospital as fast as he can.

Tolentino told INQUIRER.net in an interview today, June 26, that the incident happened around 8 p.m. along Sucat near the Manila Memorial Park. She was on her way home after a meeting with a friend. It was around 15 minutes into the car ride when she first felt the heart attack symptoms, with her whole body going numb and her heart “pumping so hard.”

Her near brush with death was also chronicled in her Facebook post two days ago, June 24, where she wrote about the incident in detail.

“Tonight, I thought that it was my final destination already, I was alert and was telling myself: ‘Nope, not today.’ And I’m thankful that I have this Superman with me who saved my life,” wrote Tolentino.

Tolentino was referring to Lunar, the driver, who did all he could to make sure he got to bring her to the hospital.

(I told him: Bro, don’t panic (he thought it was a hold up), I can take care of myself, it looks like I’m having a heart attack. I can reach the hospital. All you have to do is drive fast and do all that you could for us to get through on the road.)

As per Tolentino, Lunar did not say anything anymore. Instead, he lowered his car window and started shouting, “Tabi!!! Tabi!!!” so their vehicle could pass through.

Thanks to his assertiveness, Lunar was able to bring Tolentino to the Unihealth-Parañaque Hospital & Medical Center in no time. Moreover, Lunar also took care of Tolentino’s belongings while she was admitted inside and, according to Tolentino’s sister, he waited outside patiently and even canceled two of his bookings, all to make sure she was alright.

Unfortunately, Tolentino still hasn’t spoken to Lunar since the day of the incident. She has not been able to personally thank him either for saving her life, since she was not able to get his contact number.

“I haven’t contacted him and seen him,” Tolentino told INQUIRER. “I was not able to get hold of him, yet I don’t know his number… I called Grab but they need to verify with kuya Arnel if it’s ok to give his number to me.”

About her health, Tolentino told INQUIRER that she is already doing fine and just needs a few days to recover.

“I need to take another day or two for rest,” said Tolentino. “I’m watching my food intake and also I’m continuing my daily workout.”

She added that the reason for her being calm throughout instead of panicking was all thanks to her brother, a nurse, and her boyfriend, who is a health coach.

“I am lucky to be surrounded by a strong support [system] and [who are] always reminding me of what to do in case of emergency,” Tolentino shared to INQUIRER. “And it is also important to listen and cooperate and talk to your body on what to do first.” JB