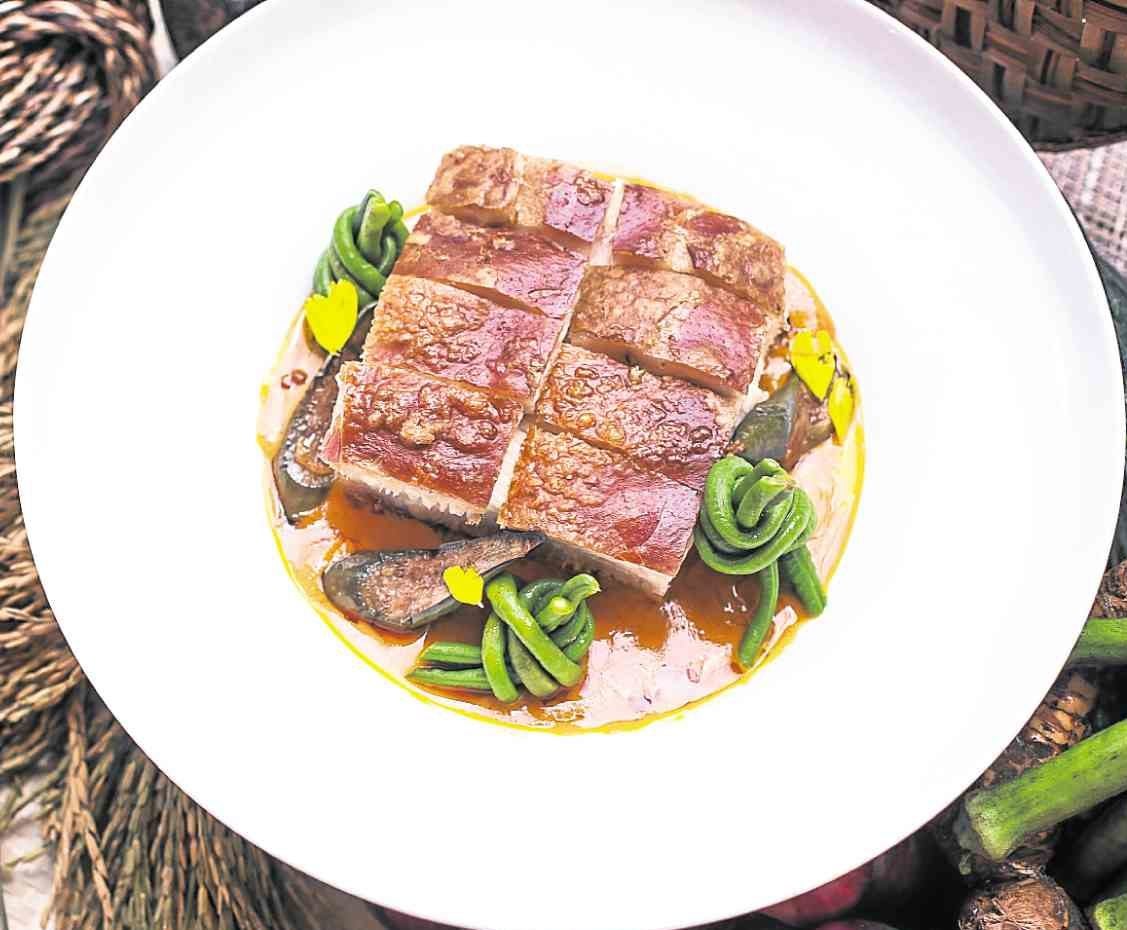 These are just some of the must-try dishes created by homegrown culinary superstar chefs Sau del Rosario and Miko Aspiras in a special Filipino feast ongoing until July 1 at Diamond Hotel Philippines’ Corniche restaurant.

Dubbed “Filipino Culinary Pride,” the festival enables the chefs to give unexpected twists to and new interpretations of Filipino favorites; they playfully add new ingredients to enhance the flavor profile of each dish and boost its texture.

“My take on Philippine cuisine is not really changing the recipe,” says Del Rosario, “but rather, enhancing it to make it more appealing and updated to new generations.”

Instead of the traditional stewed oxtail or beef hocks, Del Rosario’s signature kare-kare comes with crispy pork belly dressed with orange-colored sauce made richer and more buttery in taste with macadamia puree, glutinous rice and coconut milk. The addition of truffle oil in the sauce offers a new layer of flavor.

Tamales, another favorite in Del Rosario’s repertoire of Pampango dishes, is transformed into a thick, creamy and velvety fare with finely ground rice with coconut milk loaded with meat slices. It’s different from the usual rice delicacy wrapped in banana leaves.

“Tamales is a dying recipe in Pampanga,” says Del Rosario. “It’s sold only in the churches by old Pampango people. I told myself that I need to upgrade the taste and presentation of tamales for young people to appreciate it more.”

The chef has added a gourmet-like spin to his lechon (porchetta) with three versions: Luzon is stuffed with buro or fermented rice, Visayas has a stuffing of Guimaras mangoes, and Mindanao incorporates Malagos cheese and chocolates.

“It’s fun to work with Miko,” says Del Rosario. “I always say he’s one of my protégés because he always says I am one of his mentors.”

“I first saw Miko when he was still in school,” he recalls. “I saw his potential. I immediately told him to work for me after college, which he did. He’s very talented and gifted.”

For the hotel food fest, Aspiras is in charge of desserts. One to try is his Zero Waste Movement Ice Cream flavor.

“This ice cream flavor for Diamond Hotel is quite special to me,” says Aspiras. “I’ve been driven by this movement of recycling or repurposing ingredients. I want to breathe new life into ingredients that people would rather throw away. I used to work in hotels and I know the amount of food stuff we throw away.

“There’s nothing wrong with bread and butter pudding (often made from day-old bread). It’s delicious but we have to open our minds to other options.”

On the opening day of the festival, Aspiras made ice cream using day-old croissants that were chopped, toasted and tossed in butter before being sprinkled with sugar and blended into the ice cream mixture. It had a nice crunch and buttery flavor.

Aside from bread, Aspiras also recycles leftover cakes and muffin trimmings. He also reuses apple skins by making them into a sauce with balsamic vinegar and honey.

“All ingredients can be made into an ice cream,” says Aspiras. “If you have the ice cream machine, it will work.”

Aspiras has also updated the hotel’s iconic Ube Ensaymada by topping it with a combination of quezo de bola and cheddar cheese and sauteing it in cinnamon, butter and sugar. It’s served with morada bananas and rosella flower compote.

Simmer pork belly for 1½ hours, or until tender. Dampen with cloth and place in a chiller. After 4 hours, roast belly inside a 175ºC oven for an hour, or until the skin is crispy. Set aside.

Simmer annatto into the oil until it turns red. Strain. Set aside.

Sauté garlic and onion until soft and translucent. Add macadamia. Stir and add stock. Simmer for 15 minutes. In a blender, purée the macadamia mixture.

Meanwhile, pulverize rice and add to the macadamia purée. This will help thicken the sauce and give a smoky flavor. Continue to simmer for another 10-15 minutes. Add coconut milk and cook for another 5 minutes. Season with fish sauce. Add annatto until the mixture becomes orange in color. Remove from fire. Add truffle oil. Stir briefly.

Heat a nonstick saucepan, melt butter until butter sizzles. Add the banana. Sauté until bananas are lightly browned. Add cinnamon. Stir in honey, rosella jam and syrup. Simmer until honey and syrup are reduced. Stir in dark rum. Serve on top of ensaymada.

Decorate with seasonal microgreens and a scoop of ice cream.