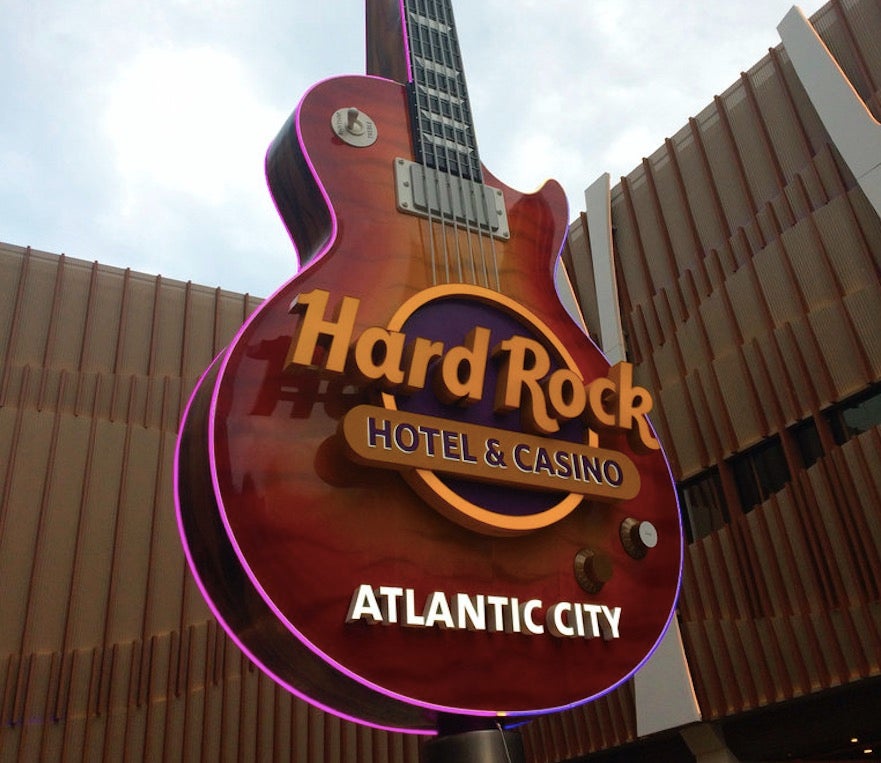 This Wednesday, June 27, 2018 photo shows the giant replica electric guitar outside the Hard Rock casino in Atlantic City, N.J. after it was illuminated on the casino’s first night of operation. Both the Hard Rock and the Ocean Resort Casino have grand openings planned for Thursday but opened their doors a day early after receiving permission from state gambling regulators. Image: Wayne Parry/AP Photo/

ATLANTIC CITY, N.J. (AP) — Many sweet rides have pulled up to Atlantic City casinos over the years, but this one was the King.

Joe Emanuele, whose vast portfolio at Hard Rock International includes finding and securing music memorabilia, had located Elvis Presley’s Rolls Royce, bought it at an auction and drove it to the Atlantic City casino whose opening Hard Rock will celebrate Thursday morning.

It is one of two shuttered casinos that reopened Wednesday afternoon, ahead of schedule, after being cleared to do so by New Jersey gambling regulators. Hard Rock, the former Trump Taj Mahal, and the Ocean Resort Casino, the former Revel, are both having grand opening ceremonies Thursday.

At 11 a.m., Hard Rock will host a mass guitar smash on the Boardwalk. At 1 p.m., Ocean Resort will have a ribbon-cutting.

After a brutal two-year stretch in which five of its 12 casinos closed, Atlantic City now has nine. The reopenings have generated cautious optimism that better days are ahead for the seaside gambling resort that once was the only place in America outside Nevada with casinos, but which has struggled mightily as gambling spread in states all around it.

Elvis’s car is one of the first things patrons see after they pass underneath the giant replica of a Gibson Les Paul electric guitar (cherry sunburst model) at the casino’s front entrance.

“I’ve been an Elvis fan forever,” Emanuele said. Driving (very carefully, with a police escort) from a warehouse in nearby Pleasantville, New Jersey, to the casino site, Emanuele parked his derriere in the same leather seat that once supported the King of rock ‘n’ roll.

“You feel a little bit of prestige behind the wheel,” he said. “This is Elvis’s car that he picked the Beatles up in when they first came to Los Angeles.”

The car is part of a vast trove of memorabilia on display at the Hard Rock. There are gowns worn by Stevie Nicks and Whitney Houston, and guitars played by Roy Orbison, Bob Dylan and Katy Perry. There’s a leather stage outfit worn by Aerosmith lead guitarist Joe Perry.

There’s even a New Jersey memorabilia room, including the handwritten lyrics to “Dreaming” by Blondie’s Debbie Harry (a Hawthorne native,) along with stuff from Bon Jovi, Wyclef Jean, Southside Johnny, and a Western Union telegram confirming a $20,000 payment for Ray Charles to perform a concert on Atlantic City’s Steel Pier in 1978. And no one forgot the Chairman of the Board; Frank Sinatra has a presence there, too.

Those who remember the heavy-handed decorating taste of Donald and Ivana Trump from the Taj Mahal days won’t recognize the place: The row after row of chandeliers dominating the view as patrons would ride the main escalator down to the casino floor are gone, supplanted by a giant silver illuminated guitar suspended from the ceiling. Video screens surrounding the escalators play clips of Bruce Springsteen, Eric Clapton, Nirvana and Johnny Cash as customers descend to the casino floor.

At the Ocean Resort, owner Bruce Deifik has fixed most of what Revel’s former customers said they didn’t like about the place. It now allows smoking, will have a buffet within a few months, has reconfigured the casino floor to make it easier to get around, and glass safety barriers have been installed on the main escalator that made many patrons uncomfortable.

It has a golf simulator, a restaurant where kids and their parents can order cereal at any time of day, and six swimming pools. Popular features from Revel that are coming back include an outdoor pool day club, and a rock ‘n’ roll burlesque club. AB