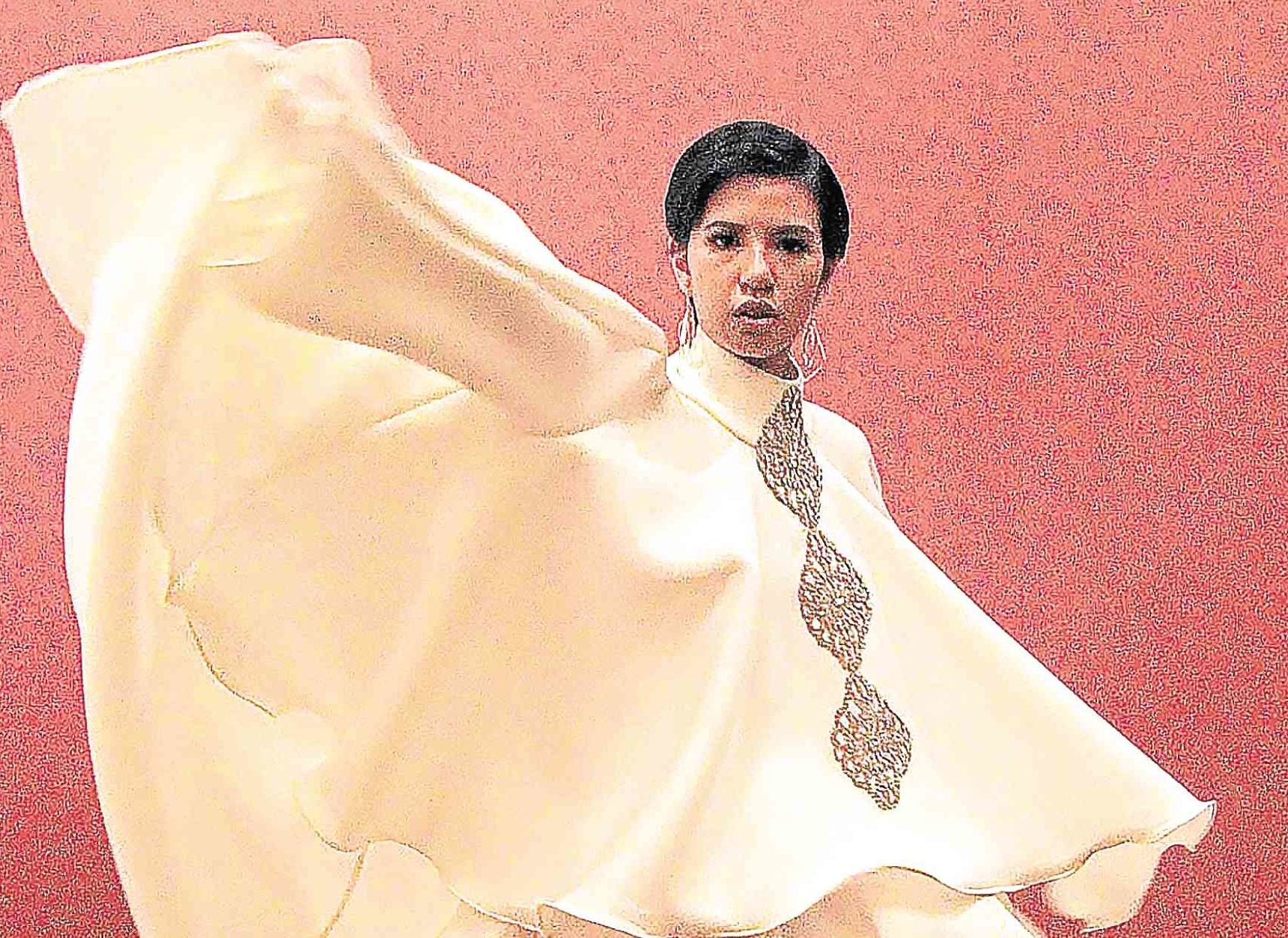 In the fickle world of fashion, as in many creative fields, you’re only as good as your last collection. Designers are pressured to present something new and fabulous every time they stage a show.

In a design competition, it is imperative to stand out.

Designer Frederick Peralta succeeded in doing just that 24 years ago when he won the top prize in the 1994 Concours International des Jeunes Createurs de Mode. He bested contenders from other countries.

His creation, a sheath dress with a deep V-neck had long sleeves embellished with floor-length fringe encrusted with crystals and pearls.

Peralta’s flair for drama would continue throughout his career that now spans over three decades.

“The details on Frederick’s evening gowns are amazing,” friend and fellow designer Albert Andrada said. “From the intricate beadwork and color combinations down to the simplest details of the clothes, it was obvious they were created by a genius.”

Andrada is known for designing the by now iconic blue gown Pia Wurtzbach wore when she was crowned Miss Universe, becoming the third Filipino woman to do so.

“Frederick’s design aesthetic is not simple, it’s elaborate,” designer friend and colleague Dong Omaga Diaz said. “That’s where his strength as a craftsman lies. His eye for detail is truly remarkable. He is one of the few designers who is able to achieve balance even though he splurges on volume and overlapping details.”

This writer remembers attending a group fashion show organized by a fashion glossy 12 years ago in 2006.

Participating designers in Metro Magazine’s Metrowear Gala were briefed and told to come up with two or three pieces showcasing their takes on spring-summer 2007.

Instead of sticking to the theme, Peralta came up with graphic black and white, zebra-striped gowns with matching bags and accessories (high-shine jewelry and movie-star sunglasses) that he draped on five towering models. That image is seared in this writer’s memory.

Some people in the audience were quick to dismiss Peralta’s capsule collection as mere “agaw eksena” (scene stealers), but the designer told this writer that as soon as the show ended, he was approached by three women who wanted to buy scaled-down versions of his black-and-white gowns.

Andrada and Omaga Diaz are just two of Peralta’s friends in the industry who helped mount a fundraiser earlier this month to help Peralta who is dealing with a number of health issues. The items sold were mainly dresses and suits he had designed and kept.

Dr. Dale Avellanosa, a close friend of Peralta, said he is suffering from a cerebrovascular accident (CVA), the medical term for stroke, and “major depression secondary to loss of a loved one.”

When Peralta’s mother died three years ago in 2015, he was deeply affected. She had been living with him before her death, and Peralta felt the loss deeply.

“He was in denial in 2016, and in 2017 he totally stopped taking all his maintenance medications. He needs to continue taking his medications, undergo physical therapy, and make regular visits to the psychiatrist to recover,” Avellanosa said.

The three-day exhibit and trunk show sale held in one of the function rooms at the Marriott Hotel in Manila was able to raise close to P700,000.

Peralta’s staff put all his gowns and men’s wear into 42 balikbayan boxes without doing an inventory.

“When I was opening the boxes, it felt like I was opening treasure chests. Inside the boxes were high-fashion beaded gowns, light dresses and a lot of men’s wear,” Andrada said. The most salable items that weekend were men’s barong Tagalog, coats, and dresses with minimal beading.

Omaga Diaz said opening the boxes was “like witnessing Frederick’s whole career parading in front of you.”

“These were the same gowns I saw in his shows when I was still dreaming about being a part of the industry,” Omaga Diaz said. “All of them, whether old or new, had Frederick’s trademarks: craftsmanship, elegance and superb artistry.”

Additional fundraisers and trunk show sales are being planned as there are still 30 boxes of clothes to offload.

“We have plans toward the end of the year and we hope it will be through the FDCP (Fashion and Design Council of the Philippines) where Frederick and I are members,” Andrada said.

“He is one of the designers I respect so much. I see how he treasures his work and how focused he is whenever he makes his clothes. He is a very supportive colleague especially to us Dubai-based designers,” he added.

The outpouring of support for Peralta is heartwarming but expected.

“He is an inspiring colleague who generously shares his know-how in our field. He is also a supportive friend whose warmth you feel in times you need it the most,” Omaga Diaz said. –CONTRIBUTED