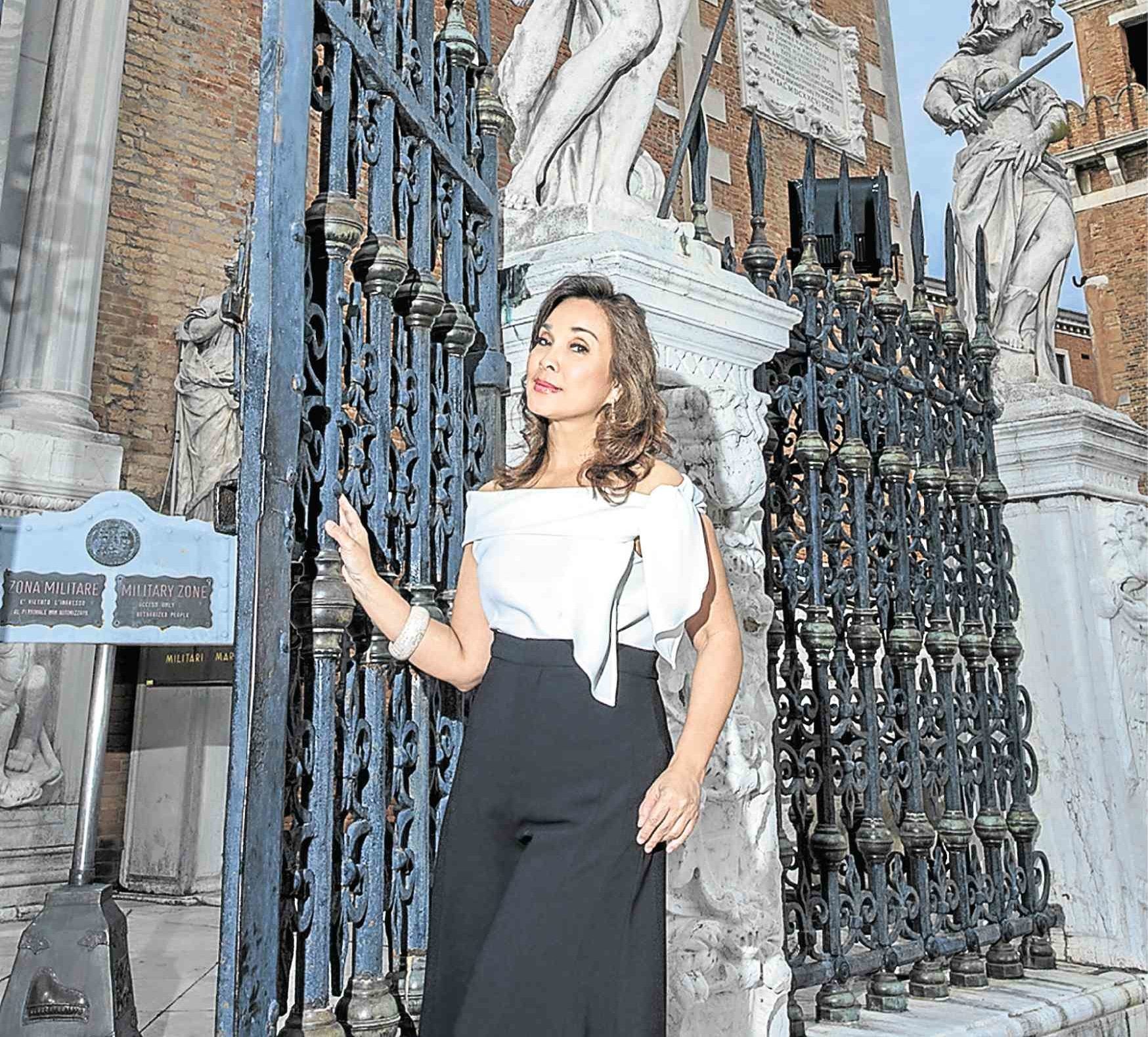 Sen. Loren Legarda by the gates of the Arsenale, known as Porta di Terra. The land portal of the arsenal of Venice was the first Classical revival structure built in Venice.

Venice—The scale and history of this ancient shipyard in the heart of Venice is mind-boggling, its beauty intoxicating.

Monumental towers provide a magnificent entrance to a massive complex of Renaissance buildings, said to be the biggest production center in Europe before the Industrial Revolution.

The Arsenale, which occupies 46 hectares, a fifth of the city, served as a factory for the trading and naval vessels of the Republic of Venice in the early 12th century.

With the massive workforce producing thousands of ships, the Arsenale propelled Venice to become a major trading power in Europe during the Middle Ages and the Renaissance. During the French occupation, Napoleon Bonaparte used Arsenale as a naval base in the Adriatic.

Visitors can imagine the frenetic shipbuilding in the Arsenale—big buildings with huge columns and high ceilings and docks serving as assembly area for the ships.

Today, the Arsenale is known as home of the Venice Biennale, the oldest and most prestigious international festival of the visual arts.

The first art exhibition in 1865 was held to commemorate the wedding anniversary of the rulers of the House of Savoy. In recent decades, Venice Biennale has been holding art and architecture exhibitions in alternating years.

To be housed at the Arsenale or in the central exhibition area in the Giardini is a status symbol for the 63 countries participating in the biennale. Others have their pavilions in beautiful palazzos elsewhere in the city, but the Arsenale and the Giardini are where the action is.

For the past two years, the Philippine pavilion has proudly claimed its place in the Arsenale, at a building called Artigliere, which used to be the workshop for artillery for the Venice naval fleet.

Securing a spot in the Arsenale was a dream come true for Sen. Loren Legarda, hailed for famously fighting tooth and nail for the Philippine reentry to the Venice Biennale after an absence of 51 years.

“Being in the Arsenale is bringing the Philippines closer to other nations and opening more opportunities for dialogue with other pavilions and a wider audience,” Legarda said.

Before even securing a spot in the Arsenale, getting the country back to the Venice Biennale itself was almost an impossible task.

It was in 2013 when Legarda started asking why small countries like the Maldives and Tuvalu were regulars at what she called the “Olympics of Contemporary Art,” while the Philippines had been conspicuously absent since its first and last participation in 1964.

With help from her two Senate legislative staffers Sheree Mangunay Infante and Estelle Custodio-Piencenaves, and Ria Lopez from the University of the Philippines, Legarda bugged government agencies for financial support and formed what is now the Philippine Arts in Venice Biennale (PAVB).

“There was so much skepticism when we started working on it in 2013,” Legarda recalled. An executive order to be signed by President Benigno C. Aquino III was scrapped because of supertyphoon “Yolanda.” Disappointed, Legarda and her team persisted.

Their tenacity bore fruit in 2015 when the Philippines finally returned to the Venice Art Biennale with the exhibition “Tie a String Around the World.” The exhibit was curated by Patrick Flores and revolved around Manuel Conde’s 1950s film, “Genghis Khan.”

In 2016, the Philippines’ first pavilion for the Architecture Biennale was set up: “Muhon: Traces of an Adolescent City,” from Leandro V. Locsin and Partners. In those two years, the Philippine pavilion was at Palazzo Mora.

Finally, in 2017, the Philippines finally secured a spot in the Arsenale for its exhibit, “Spectre of Comparison,” curated by Joselina Cruz and showcasing the works of artists Lani Maestro and Manuel Ocampo.

This year, the Philippines showcased its architecture exhibit called “The City Who Had Two Navels” by architect and professor Edson Cabalfin, also at the Arsenale.

“Who would have thought that after only two years, the Philippines, which may be a developing country but is rich with artistic talent, would be in the Arsenale? It makes me proud of the work that we do, and for me, it is a dream come true,” said the lawmaker.

Legarda said it was important for Filipinos to support Philippine participation in the Venice Biennale and other international art fairs. “Many Filipinos may seem detached from the ideas floated in artworks, especially since we are citizens of a developing nation,” said Legarda. “But art is food for the soul. We need to be immersed in our culture and creative talents so that we have a more energized and inspired citizenry.

“Our participation in the Venice Biennale is one way of conversing with other nations. It is an avenue to establish, contact and share our culture with the world.”

At the vernissage or preview of the Philippine pavilion at the 2018 Venice Architecture Biennale in May 24 here, Legarda vowed to ensure that the Philippines would continue to join the Venice Biennale even after her term as senator ends in June 2019.

“We’ve come this far,” she said. “And when government says it will support arts and culture, because that is the soul of the Filipino people, we mean it, and we hope that even after my term, those who stay behind will continue to make our presence felt in the contemporary art world.”

The Venice Biennale could be one of the more enduring legacies of Legarda after her 17 years in the Senate. It is a legacy that took her through a roller-coaster of emotions. Judging from the positive reactions to the Philippine pavilion at the Arsenale, however, everything was well worth it.