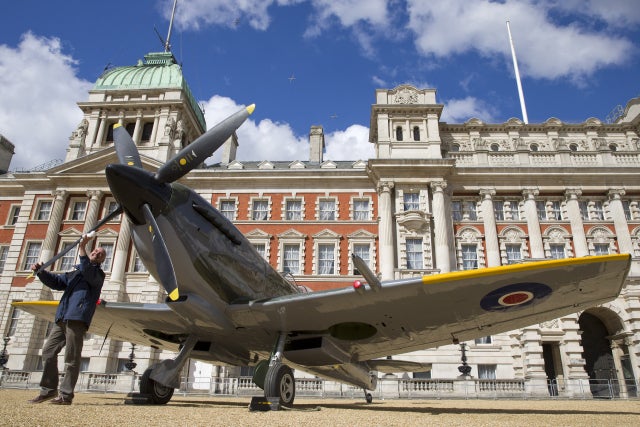 The north London attraction has been overhauled to mark the RAF’s centenary this year, with celebrations culminating in a spectacular flypast over Buckingham Palace next month.

Its three new exhibitions look at the force’s first hundred years, modern conflicts such as its ongoing campaign in Syria, and its future in the ever more hi-tech decades to come.

The centenary “was the opportunity to develop exhibitions that are much more engaging and up to date,” the museum’s chief executive Maggie Appleton told AFP.

The “RAF: First to the Future” section includes joystick-controlled simulator drone missions surveilling enemy movements and installations on the ground.

After identifying potential targets, visitors can weigh up the risks, including ethical and legal factors, before deciding whether to launch precision missile strikes.

Lindsey German, convenor of the anti-war Stop the War Coalition, told AFP: “There is something wrong with a museum encouraging simulation of precision bombing.

“We should be teaching these horrors, not imitating them.”

The future section also showcases the F-35B Lightning II stealth fighter, intended to be Britain’s main strike aircraft until at least 2040. The first four arrived in Britain earlier this month.

The new-look Hangar 1 focuses on the first 100 years of the RAF from its foundation in 1918, with the emphasis on human stories and interactive experiences.

It features the Sea King search and rescue helicopter used by Prince William during his 2010-2013 years as a chopper pilot in northwest Wales.

Three big hangars house the collection of around 120 classic planes such as the Spitfire fighter and the Lancaster and Vulcan bombers.

The third new section, in Hangar 6, is called “The RAF in an Age of Uncertainty”, looking at its role from 1980 onwards.

The hangar has Tornado, Jaguar and Harrier planes used in action in multiple recent conflicts.

It looks at the RAF’s role in Afghanistan and the current campaign against the Islamic State group in Iraq and Syria.

“It’s been a very busy period for the RAF over the past 40 years and the story of contemporary conflict wasn’t told anywhere,” Andrew Dennis, who curated the hangar, told AFP.

“It’s post-Cold War but how it will be seen in the future, we’re not sure. It’s less nation state, more counter-insurgency. It’s still a time of flux,” he said.

The RAF centenary celebrations will culminate on July 10 with a flypast over Buckingham Palace of 100 aircraft from classic Spitfires, Hurricanes and Lancasters to modern fighter jets. NVG