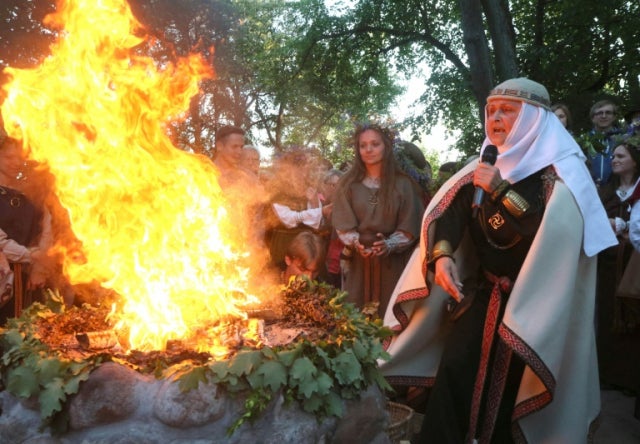 Dancing around a blazing fire with garlands of wildflowers in their hair, members of Lithuania’s Romuva neo-pagan community mark the summer solstice, as the Baltic state undergoes a revival of its pre-Christian beliefs.

Skipping to the steady beat of drums, other singing revelers at the feast, known locally as Rasa, pass under an arbour decorated with flowers before throwing salt on an altar as an offering to ancient Baltic gods.

“It’s a beautiful tradition… at this time of year, everything’s in full bloom and we feel close to nature,” says Virginija Miceliene, a 40-year-old florist attending the solstice celebrations in the lush Verkiai Park, just north of Lithuania’s capital, Vilnius.

The last nation in Europe to be converted to Christianity at the end of the 14th century, many Lithuanians are still deeply attached to pagan customs.

Thousands celebrate Rasa each year and controversial moves are afoot in parliament to accord Romuva the legal status of a religion in the predominantly Catholic country.

Dressed in a white cowl and a dark green robe covered by a flowing white cape embroidered with traditional red and green geometric designs, Trinkuniene looks as if she has stepped straight out of the Middle Ages.

“More and more people are discovering our practices and find that they feel close to them because it’s something very Lithuanian,” she told AFP, surrounded by similarly-clad Romuva believers both young and old.

A pantheistic religion based on the belief that the natural world is divine, Romuva holds the god of lightning and thunder, or Perkunas, and Zeme, or Mother Earth, as its top deities. Earth’s cycles mark out its feast days.

Suppressed by the Soviets after their occupation of Lithuania in 1940, Romuva and its Rasa feast was furtively revived in 1967 by ethnologist and dissident Jonas Trinkunas as a way to express Lithuanian national identity.

But by 1973 the nascent movement was driven deep underground after Soviet authorities cracked down on its leaders.

Romuva has attracted thousands since 1990 when Lithuania broke free from the crumbling Soviet Union. However, the only official figures cite some 5,118 followers and date back to the 2011 census.

Parliament is expected to formally recognize Romuva as a religious community later this year, giving pagan marriages and baptisms the same civil status as Christian, Jewish or Muslim ceremonies.

Ramunas Karbauskis, a farming tycoon and leader of Lithuania’s governing Peasants and Green Union party, is widely regarded as having masterminded moves to accord Romuva legal status in this Baltic eurozone state.

Having won elections in 2016, his party’s popularity was driven in part by his reputation for reviving ancient Baltic customs, most notably in his tiny home village of Naisiai.

He transformed it from a derelict Soviet-era state farm into a pastoral wonderland boasting public gardens dotted with wooden statues of pagan-era Baltic gods.

The pagan renaissance is not without controversy in this nation of 2.9 million where 77 percent of the population identifies as Roman Catholic.

Conservative politicians have questioned the legitimacy of Romuva as a religion, arguing that it lacks “historical continuity” and “written tradition.”

Philosopher Nerija Putinaite argues that the move to recognize Romuva is a “political decision related to the interests of the (governing) party” and has warned that it could be exploited to shape and control national identity.

For sociologist Milda Alisauskiene, the Romuva “religion is, in fact, a reconstruction… it is part of a global phenomenon in reaction to globalization that emphasizes the desire to preserve local traditions.”

Former conservative prime minister Andrius Kubilius is also a critic. He points out that the vote giving Romuva official religious status will likely come this autumn as Pope Francis visits to mark 100 years of Lithuanian independence.

For Migle Valaitiene, a 27-year-old housewife who is a Romuva “vaidila” or sage, politics and questions of national identity could not be further from her mind.

“Some people may see this movement as a kind of patriotism, but it is a religion for me, and we emphasize the importance of both the male and female essence.

“In the Christian religion, God created the human being and God is a man,” says the young mother, who discovered Romuva as a teen. CC

Does the story of Jesus have a pagan origin?