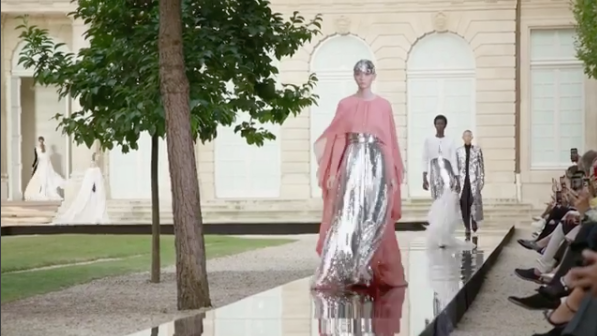 To the wispy singing of Givenchy’s muse Audrey Hepburn, the opulent draping of the late couturier was rediscovered in Keller’s dramatic designs, embellished with paillettes and feathers.

The display, unveiled inside the 17th century National Archives, gloriously capped the first day of fall-winter collections that run for four days and represent designers from some 11 nations.

Keller proved she had depth, as well as ambition, in her fantastical evening collection that was flanked by Champagne-sipping VIP guests against a shimmering, mirrored decor and the setting summer sun.

This season, the British couturier delved into the house’s archives to rediscover the late Givenchy’s penchant for enveloping cloaks and capes and magic to create mystery in the 42-piece display. Booklets given to guests contained portraits of the giant of fashion who passed away in Paris in March, aged 91.

Structured silhouettes with peaked shoulders enveloped the bodies of models who walked as if in a state of trance around the verdant inner courtyard of the historic venue.

There was much poetry in the designs, as there was in the program notes which, compared the veiny markings across some of the fabrics to “tree roots erupt(ing) across lustrous silks.”

Simply the best moment, however, was the homage to Hepburn, the long-time muse of the label and personal friend of the house founder.

Front-row guests hummed to themselves as “Moonriver” capped the collection and was set to looks featuring long black gloves and a black gown referencing the much-imitated style of the Hollywood great.

It was a deep-dive into the fashion encyclopedia for Ronald van der Kemp.

The Dutch designer, who’s been presenting a demi-couture — or couture-lite — collection, since 2014, presented a glitzy display of show-stopping gowns all with a unique and different style.

They captured a historic mood and were a great way to kick off the haute couture calendar.

Other historical references, such as a conical bustier that riffed on a corset, were given a jolt of the contemporary here by the hue of electric yellow.

Sheeny split-leg gowns, a LBD with a geometric neckline and square shoulders came on futuristic-looking models with band makeup across their eyes.

It was a saleable collection for Van der Kemp whose fans already include Kate Moss, Katy Perry and Lady Gaga.

One of the lesser known names of the couture calendar, Polish designer Ewa Minge took her guests on a trip to the ballet.

Ballerinas sat on the wooden panels of the luxurious runway floor, their arms raised in fifth position, as diaphanous gowns filed by to enchanting music.

Variations on the tulle tutu came on bodice dresses in white, light sky blue, pale yellow and in pink with sometimes exaggerated flounce, perfectly evoking the name of the fall-winter show: Swan Lake.

The ballet theme was quite a smart, even commercial, move for a couture show. Minge was able to fuses the balletic vibe with bridal gown-style silhouettes. Bridal gowns are haute couture’s biggest selling single item.

On the sidelines of haute couture week is haute joaillerie — in which the world’s most prestigious jewelers unveil their sparkling new annual collections.

Place Vendome’s famed jeweler Chaumet used the location of the Pompidou Center modern art museum in Paris to show off the “African Treasures” display, in which their classical techniques were fused with African-tinged styles and ethnic geometry.

References such as photographer May Ray’s 1926 photo entitled “Black and White”, of a woman and an African mask, inspired the creations made in lapis lazuli, diamonds, brush gold, white gold and ebony.

The African theme is the third in a series called “Worlds of Chaumet” that has included Japan and Imperial Russia and is inspired by different parts of the globe. CC