Life on the line: the railway people of Hanoi | Inquirer Lifestyle ❮ ❯ 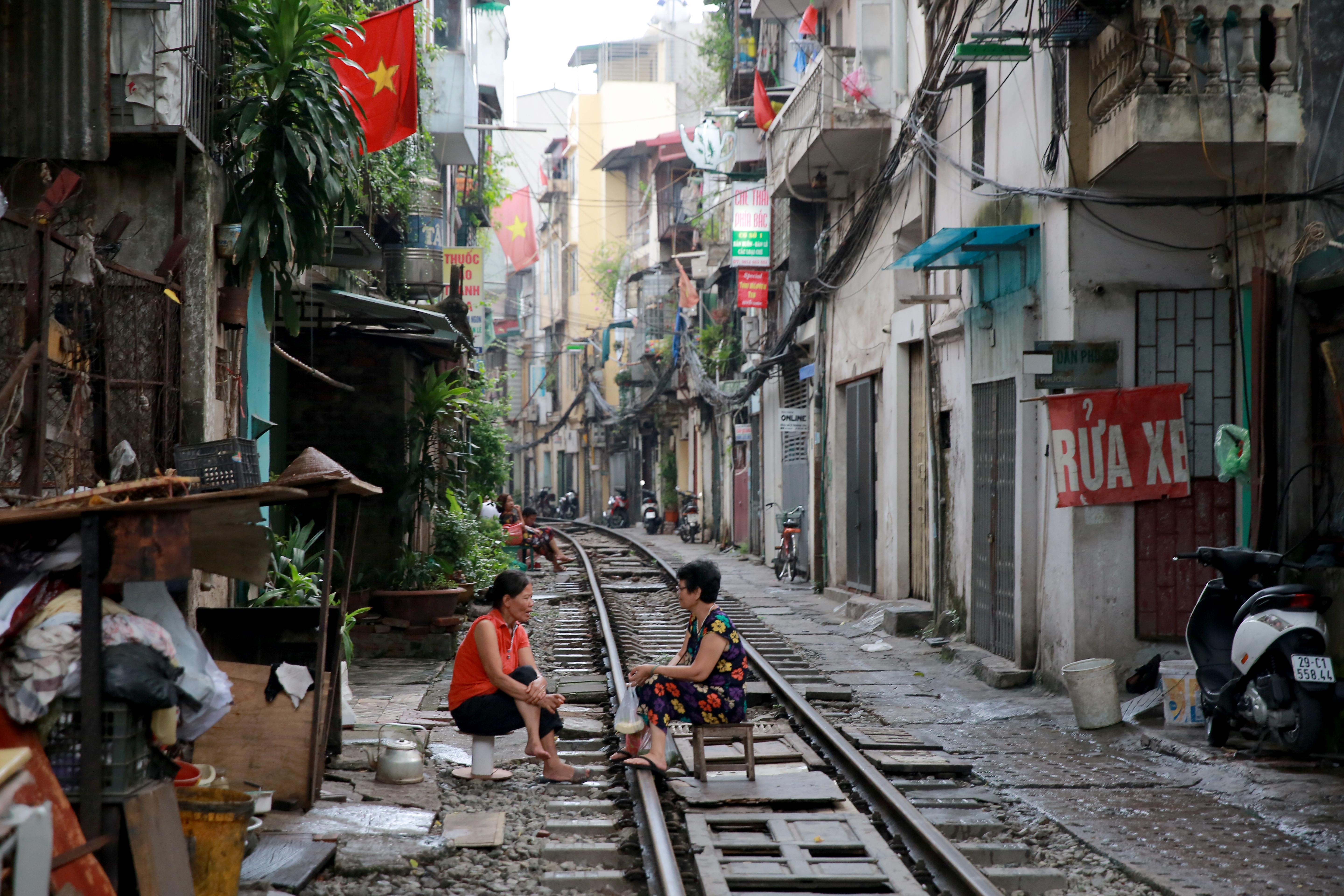 Life on the line: the railway people of Hanoi 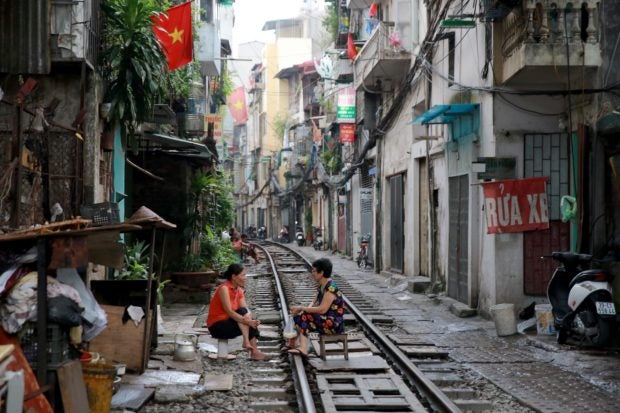 HANOI — Vu Thi Khoa washes her dishes in a plastic basin outside her home using water from a makeshift hosepipe.

As she carefully scrubs away the dirt she issues a frank and stern warning.

“Keep your ears and eyes open and pay attention to the light and train horn signals,” she says, “to avoid being hit by trains.”

Khoa has lived less than a yard away from the railway line for 27 years, so she knows how to stay safe, and to keep others out of trouble, too — she’s raised her children and grandchildren there.

She’s used to the noise, used to the dirt and used to the risks, just like all the people who live their lives on the train line in Hanoi.

Several stretches of the North-South railway line passing through Ha Noi have become points of attraction for foreign tourists because of the houses people occupy just a few steps away from the tracks.

Dating back to 1881, the 1,730km North-South railway line passes through 21 provinces and cities across Vietnam. When Hanoi Station opened in 1902, the train lines that entered it were built in barren areas. But as the city grew and became more populated, houses were constructed closer and closer to the tracks.

It is estimated there are hundreds of households living this way in the city’s inner districts, including Ba Dinh, Hoan Kiem and Dong Da.

Most of the residents used to be railway workers. Some moved to the capital city from other provinces to find jobs.

“Living here is not nearly as good as other places,” says Nguyen Thi Dau, who has been living near the railway line for 33 years. “But we’ve been living here so long we’ve all got used to it.”

Open up Dau’s front door and there’s a small kitchen, bare walls, a room and an electric fan, constantly pointing in the direction of her husband, who lies on the bed.

He suffered a stroke seven years ago and has rarely moved since.

“The noise used to keep us awake, and we used to freak out when trains passed by because they shook our house. But then we all got used to it,” Dau adds. “Life is tough here but we accepted it.”

Using a method like Khoa’s, Dao Van Chinh scrubs away dirt from his clothes as he sits leaning over a plastic basin where he washes his garments.

They may come out of the water clean this time, but it won’t be long before they need a new rinse.

“People here live a hard life,” he says. “The noise, the train exhaust, the dirt.”

“It would be nice if the State clears this place and provides us with an apartment building, for example,” he adds. “Or some money, or any other forms of support.”

Though life here is hard for residents, to the tourists who regularly visit it is a magical place and a must-see during their stay in Hanoi.

The place is often a hive of activity packed with visitors desperately searching for a new profile picture.

“It’s a completely different cultural experience to where we are from,” says Jamie Smith, from Scotland.

Children play, pets run around and plastic chairs are placed in the centre of the railway while people just chat and go about their normal lives, many playing board games, others sipping tea.

Businesses operate yards from the track, such as restaurants, beauty salons and cafes. One shop even sells clothes.

Each day dozens of trains pass through these tracks, even more on weekends and evenings.

Tourists know the train times and come prepared. Long before the engines come, they move towards the middle of the line, posing for the camera, looking for the coolest of shots.

When they hear the noise of the train in the distance, the whole scene changes. Backs firmly to the wall, lenses pointed in the direction the train as it approaches, they are ready to record this once-in-a-lifetime experience. 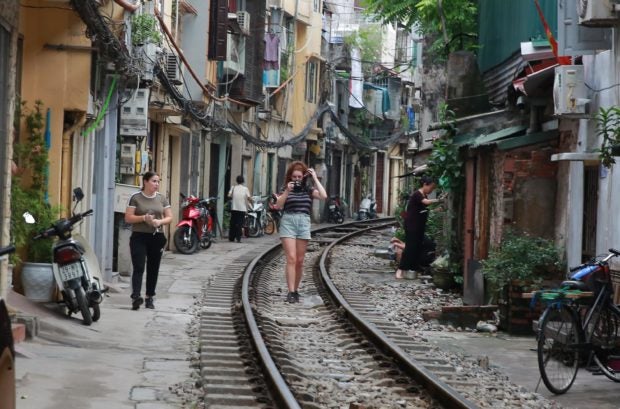 Though considered by tourists a unique cultural mark of Vietnam, living close to the railway line violates the country’s railway safety regulations.

The 2006 Law on Railways stipulates that the space between the railway line and residential areas must be five to seven meters.

That’s what Phuong Thanh Dai remembers. Having worked as a train driver for 27 years, it has become his daily routine to carefully negotiate the challenges faced by all train drivers picked for those particular routes.

“When I first started as a train driver, there was ample distance between the train line and the residential areas,” says Dai. “It must have been a few meters but now they are too close to one another. Residents encroach illegally on the space to the rail line because they live so close.

“It is often said we are driving on the pavement.”

Citizens of Hanoi are often seen crossing the railway line wherever they see fit. Small vendors, street hawkers gather near the line to sell stuff, only rising to their feet when hearing the train horn signal.

Around 5,000 level crossings in the country, of which 4,302 are illegal, remain unguarded and are the main cause of railway accidents, according to the Vietnam Railways Corporation.

Figures from the corporation show that only 641 level crossings, which are built to cross railway tracks, are manned by its staff. The rest, including 4,302 illegally built level crossings, are only equipped with warning signals or alarms.

They also show that 70 per cent of rail accidents reported in 2017 occurred at these crossings.

A survey by the Vietnam Railway Authority in 2012 showed Hanoi as one of the localities with the most violations of railway safety, Kinh te & Do thi (Economic and Urban Affairs) newspaper reported.

Today it is near impossible for the authorities to change the area. Short of knocking down all the houses, it would be extremely difficult to move those that live here to new accommodation.

Nguyen Chi Trung, chairman of the People’s Committee of Dien Bien Ward says: “The Ba Dinh District has assigned its natural resources and environment division to review the origin of residents living close to the railway line in the district.”

“They will then report to the higher-level authority so as to develop house clearance and relocation options,” he adds.

With safety in mind, the committee wants to make sure the area is well patrolled and people who live and visit the area take extra care.

“The biggest difficulty is we cannot prohibit residents from entering their houses,” Trung says. “In order to ensure their safety every day we send civil guards to patrol the area and instruct residents and foreign tourists to comply with the railway and road traffic laws.”

Pham Nguyen Chien, head of the railway safety and security department of Viet Nam Railways Corporation, says that although living so close to the railway line is against the law, enforcing it would be difficult.

“It is impossible for the railway sector to address rail safety violations alone,” he says. “This is a social issue. Managing railway safety is similar to managing constructions in urban environments. It’s complicated.”

“We are just an enterprise,” he adds. “We do not have the authority to impose penalties, let alone force them to move away.”

With few options available, the railway residents of Hanoi must continue to live their lives on the line.

While they admit it’s not easy, many of them are that used to living there, it has become normal.

And while they all share the same common denominator as they struggle day to day, they have managed to form a community with a close-knit spirit far higher than many other neighbourhoods.

“We’re all poor, but we stick together and help each other when needed,” says a resident, Dao Van Chinh.