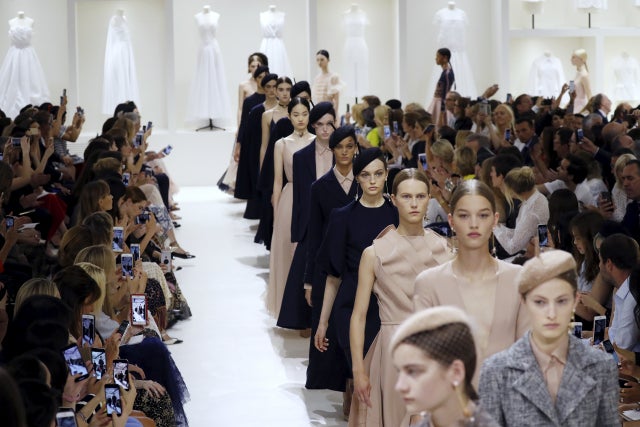 "The audience that buys couture is not an audience that spends its time on Instagram," designer Maria Grazia Chiuri told AFP. Image: FRANCOIS GUILLOT / AFP

Fashion powerhouse Dior brushed aside the whims of the Instagram generation with its deliberately low-key new haute couture collection Monday, arguing that the world’s most expensive clothes don’t need to shout about it.

Designer Maria Grazia Chiuri said she wanted the French label’s latest prestige range to glorify classic craftsmanship rather than the flashy designs that rack up “likes” on social media.

“It’s hidden luxury,” the Italian explained as the collection of dreamy ballgowns and neat, 1940s-inspired tailoring went on show before the global fashion elite in Paris.

“The audience for couture knows what couture means—it’s a piece that’s made especially for you, just for your body, that it needs time.”

Chiuri went back to basics for autumn/winter 2018-19, kicking off with a muted palette of nudes, navies and dusty pinks which eventually warmed into tangerine, leaf green and colorful embroidery.

Many of the models wore demure berets or the kind of timeless, full-skirted gowns that wouldn’t go amiss at the stiffest of high society balls, but Chiuri was also not afraid to let the odd nipple peek through.

After taking a strong feminist stance in her recent work, she also threw a few sharp gold power-suits among a wealth of feminine touches such as dainty embroidered flowers.

Some of the gowns required 800 hours of work—a hallmark of haute couture, reflected in price tags that can soar into the tens of thousands—and Chiuri said her discerning customers didn’t need to be ostentatious.

“Sometimes people believe that couture is something that shows off, that if it’s expensive, that has to be visible,” Chiuri said. “No, that’s not couture.”

Only 14 fashion houses boast the “haute couture” label, which is accorded under strict criteria by the French government to reflect the craft that goes into these hand-sewn, custom-made garments.

Chiuri said she wanted her new range for the 0.0001 percent to pay tribute to the “atelier”, the designer’s workshop where the magic happens.

That much was clear from the backdrop of white-clad designer’s mannequins at Paris’s Rodin Museum, where Hollywood actress Katie Holmes and Victoria’s Secret model Karlie Kloss were among the audience.

If Dior stuck to tradition then Iris van Herpen took the opposite approach on day two of haute couture week, unveiling a collection true to her credentials as one of the most boundary-pushing designers out there.

The Dutch futurist said she was inspired by “the current scientific shift in which biology converges with technology,” showing off dresses whose patterns mimicked the sound waves produced by birdsong.

Some of her designs would not have looked out of place in the Star Wars cantina, including a black wire bodice that sat over the model’s body like a cage, and a dress made of innumerable grey pleats that blossomed into a headdress.