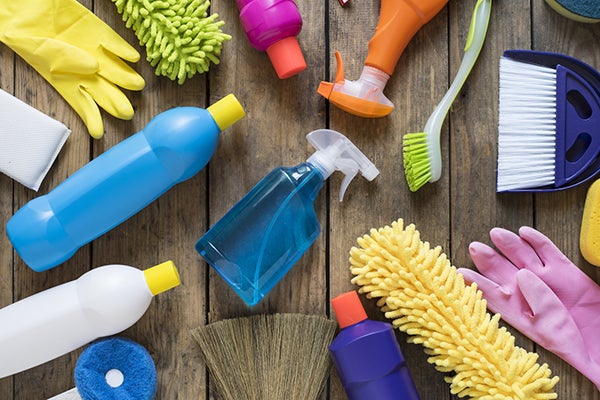 Everyday chemical products such as those used for cleaning could be affecting the health of many Australians according to new research. © Tatomm / Istock.com

One-third of Australians getting sick from everyday chemicals

New Australian research had found that nearly one in five of the country’s adults report chemical sensitivity, and more than one third have been medically diagnosed with Multiple Chemical Sensitivities (MCS), which can cause a variety of health problems for sufferers when exposed to common chemical products.

Carried out by Anne Steinemann, Professor of Civil Engineering and Chair of Sustainable Cities at the University of Melbourne, the study recruited 1,098 Australian adults age 18 to 65 and asked them to complete an online survey to assess the prevalence of MCS.

The responses showed that 18.9 percent of participants suffered from chemical sensitivity, which is being unusually sensitive to everyday chemicals and chemically formulated products, and 6.5 percent reported medically diagnosed MCS, suggesting that the conditions are widespread in Australia, with MCS affecting an estimated 1 million adult Australians and chemical sensitivity affecting another 2 million.

Among those with MCS, 74.6 percent also had diagnosed asthma or an asthma-like condition, and 91.5% had fragrance sensitivity, reporting health problems such as migraine headaches when exposed to fragranced consumer products including air fresheners, deodorizers, laundry products, candles, cleaning supplies, and personal care products.

In addition, MCS also affected participants’ ability to work, with 77.5 percent of those with the condition reporting that they are prevented from going to certain places because of fragranced products; 52.1 percent lost workdays or a job in the past year due to their exposure to fragranced products in the workplace, and 55.4 reported that the health effects caused by MCS are potentially disabling.

“Multiple Chemical Sensitivities is a serious disease that is often caused and worsened by exposure to petrochemical sources such as pesticides, solvents, new building materials and fragranced items,” said Professor Steinemann, who is an international expert on environmental pollutants, air quality and their effects on health. “Even low-level exposure can inflict a range of adverse health effects such as migraines, breathing difficulties, cognitive impairment, seizures and asthma attacks.”

A previous study by Professor Steinemann also found that in the United States one in four Americans suffer from chemical sensitivity, and 12.8 percent have been diagnosed with MCS.

“While Australia is not yet at the same levels as the US, it appears we’re on the same pollution path,” Professor Steinemann said.

To try to prevent any negative health issues Professor Steinemann recommends choosing products without any fragrance. She also believes that workplaces, healthcare facilities, schools and other indoor environments should implement fragrance-free policies.

“The products that are problematic for people with MCS are also major sources of air pollutants. Reducing your use and exposure to these products benefits not only your own and other people’s health, but also the environment,” she said.

The results can be found published online in the journal Preventive Medicine Reports. MKH

US OKs first prescription drug made from marijuana