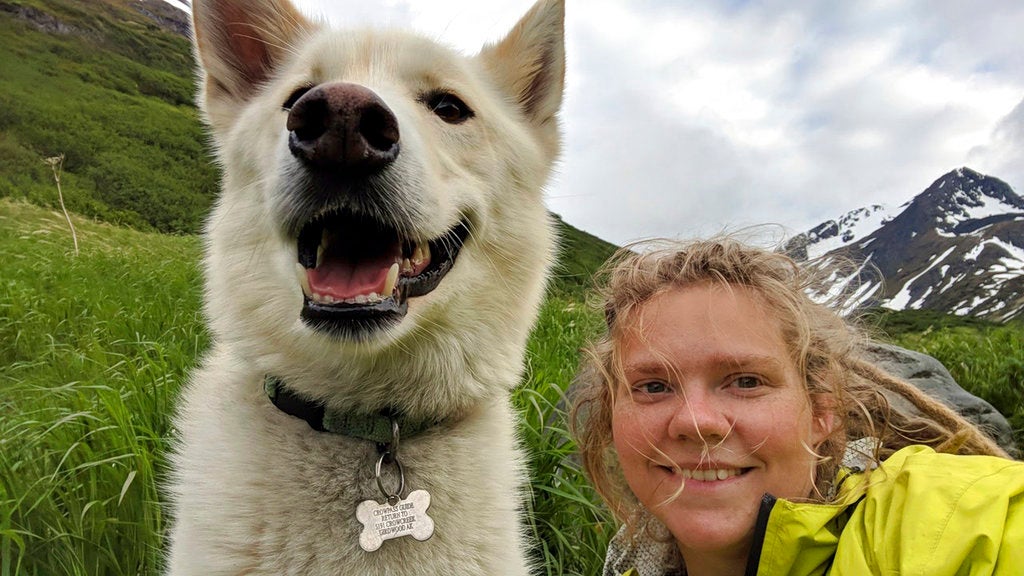 This Tuesday, June 19, 2018 photo by Amelia Milling shows her with a 7-year-old Alaskan husky named Nanook, that is credited with helping rescue her when she injured was hiking a trail in the Chugash State Park east of east of Anchorage, Alaska. Milling, a college student from Tennessee, was hiking the Crow Pass Trail and was injured early in the planned three-day hike. She says the white dog found her after she tumbled down a slope. Nanook's owner Scott Swift says Nanook has been taking trips into Chugach State Park for years and accompanies hikers he meets on the trails. (Amelia Milling via AP)

Milling, a 21-year-old college student from Tennessee, was hiking the Crow Pass Trail and was injured early in the planned three-day hike. The white dog found her after she tumbled down a snowy slope and hit a rock that launched her into the air, she said.

“My first response was, where’s the owner?” Milling said. “Then I saw the collar and it said (the dog) was a Crow Pass guide, and I realized that he was there to help me.”

Nanook guided her back to the trail and camped with her overnight. The next day Nanook stayed with Milling as she attempted to ford the river.

The spot was too deep, and Milling fell into the water. As she scrambled to the shore, Nanook helped her out of the freezing glacial water.

“She slipped and fell, and the dog was able to save her and get her back to shore,” Lt. Eric Olsen said with the Alaska State Troopers.

Milling later activated an emergency locator and was rescued by a trooper helicopter. Milling and Nanook were airlifted to Anchorage. Milling was treated for minor injuries and released.

“I believe the dog is a guardian angel,” Milling said.

Troopers at first thought the dog was Milling’s, but later saw Nanook’s tags, Olsen said. Nanook belongs to Scott Swift who lives near the south end of the 24-mile (39-kilometer) trail.

Nanook regularly takes trips by himself into Chugach State Park and accompanies hikers he meets on the trails to the Eagle River Nature Center, Swift said.

“He’s been doing it for years now,” Swift said.

Swift adopted Nanook about six years ago. The dog does not have rescue training.

“He just does it on his own,” Swift said.

While on one of his mountain adventures a few years ago, Nanook helped a young girl out of the river.

“This is the second time I’ve heard of he has saved someone from drowning in that river,” Swift said. NVG