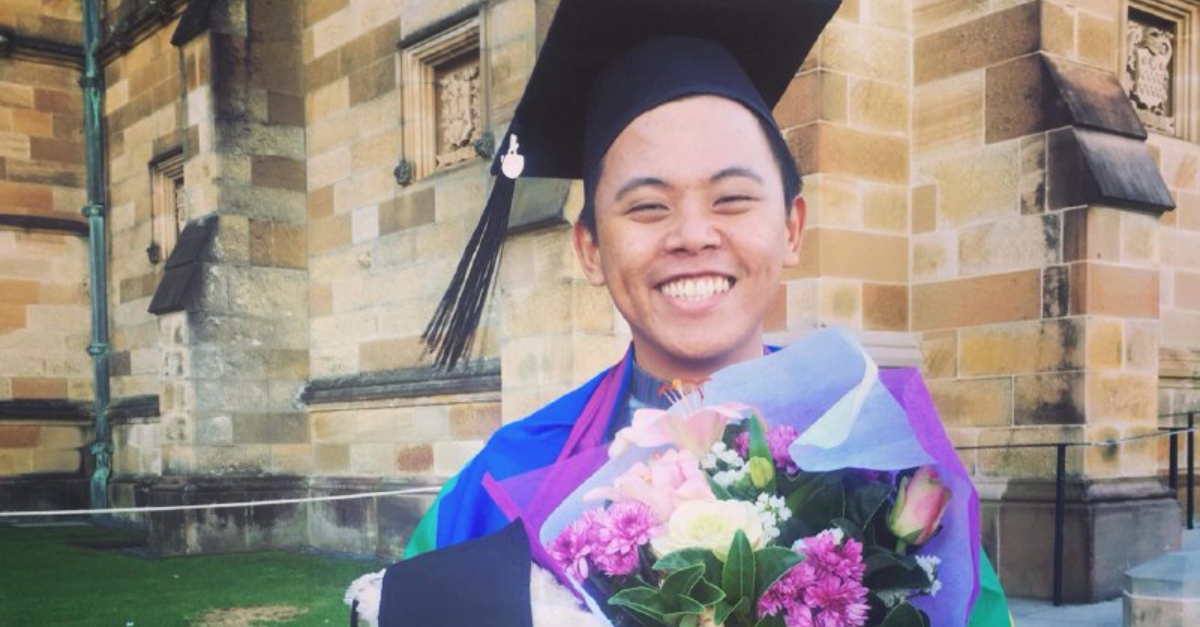 Orphaned at seven and raised by two older siblings, John Carlo P. Fernando learned from a young age what it meant to struggle to survive day-to-day — and how important it is to work together to achieve dreams.

At 27, he stood before 2018’s Australia Awards scholars from the University of Sydney, where he studied, to address them at their completion ceremony held Wednesday, July 4.

The Australia Awards is part of the Australian government’s aid to the Philippines where Filipino leaders are provided with a postgraduate studies scholarship. Its aim is to equip these leaders with the necessary qualifications to contribute to their home country’s socio-economic development after the program.

Fernando took up Master of Learning Sciences and Technology (Research) at the premier university. He has made education his lifelong mission, having worked at nonprofit Teach for the Philippines and at the Commission on Higher Education.

In taking the course, he told INQUIRER.net, “I hope to understand how to strengthen the innovative practices in education that truly address the needs of teachers and students and not merely to replicate best practices from other countries.”

And though Sydney and all its advancements and conveniences could entice a student to stay,  Fernando said he’s “excited to go home.”

He plans to work on education reforms in terms of the implementation of K to 12 in the country, as well as train preservice teachers.

In his speech, he recounted how his difficult childhood experiences growing up in Caloocan allowed him to connect with underprivileged students he would teach later on. Where he was assigned, most of his students lived in Payatas, a dumpsite which is home to informal settlers.

His students’ ages ranged from 8 to 18 years old, but most of them, he noted, were the same age as he was when he lost his father. He saw in them the same hope in impossible dreams and the same spirit of helping one another that he had with his siblings.

In writing this speech of surprising possibilities and self-acceptance, he said, “I was trying to tell people how beautiful it is to be alive.”

The following are excerpts from his address:

“I remember one of my literature professors telling me that the first, most vivid, childhood memory you have somehow predicts your future life. Looking back, mine was a day in nursery, when my mother, whom I call Nanay, was teaching me how to color a picture of an elephant from a coloring book.

I did mine, in orange – not knowing that elephants should be black.

The first elephant I saw was in Manila Zoo. I was around nine at that time. I wish Nanay [were] there beside me when I first saw a black elephant, but she wasn’t there. She passed away when I was five.

I still remember her, she looked like she was sleeping – and I was gently tapping her knee, trying to wake her up, because I wanted to tell her the story my cousin and I made as we played Barbie. But she wouldn’t move.

Two years later, my father, whom I call Tatay, followed her in heaven. I was seven. It was a difficult time for my sister, brother, and I – but I always remember what Nanay taught me: to see challenges as learning opportunities, to appreciate everyone’s guiding hand, and to continue realizing my imaginations.

These are the three key messages I learned from her, and probably, these are the things that still guide me as I go through life. Growing up, my sister, brother, and I helped each other survive.

Those years were difficult, and I couldn’t imagine running a family at a young age, which my sister and brother did – my sister in college, my brother in high school.

But then again, never did we see any challenge as a reason to give up.

Years later, my sister became a manager at a teacher training foundation while my brother became a renowned filmmaker. Following the footsteps of my sister, I became a public school teacher.

I taught around 420 third graders in one of the most underprivileged communities in the Philippines, teaching language and reading across six sections, of kids with varying personalities and strengths – each one carrying hopes and dreams and visions of a better future.

They were the same age as me when I lost both of my parents.

And I still remember them as all of us learned to appreciate each one’s guiding hand.

You see, ironic as this may sound, whenever you teach, you’re the one who always [learns].

One day, in one of my lessons in reading – I taught them to differentiate reality and fantasy. It was the day I read them a story book called “Magic Mat”, where a kid, who sleeps on a mat, dreams of traveling the world.

In one activity, I asked them to draw images of reality and fantasy. One of my students, Antonette, drew a candle as her reality – and a lightbulb as a fantasy.

She told me that all she wishes is a lightbulb for her home.

As I stood up in the classroom, I knew it was my job to make them believe that nothing is impossible as long as we support each other. Because after years of not having electricity and water at home, my sister, brother and I managed to have it fixed.

Which, for the seven-year-old me, seemed to be an impossible reality.

During my years of teaching, which I still consider as the best years of my life, my students became each other’s helping hands.

Jamaica, who started as a struggling reader, ended up reading a storybook to Joshua, one of her visually impaired classmates.

Humphrey, who started punching his classmates, having lived in a violent neighborhood, ended up donating his lunch money to typhoon survivors in central Philippines.

And Mashael, one of my Muslim students, gave a silent prayer to Carol, one of my Christian students, as she was quietly battling malaria.

With the classroom as a microcosm of my country, I grew to realize that we can only survive if we are able to help one another. I always tell my kids that they can be whatever they want to be as long as they continue to study hard, to practice kindness, and to believe in their questions.

When I went here to Sydney, I didn’t come alone. I went here carrying the voices of my students, the dreams of their parents, the hopes of my co-teachers, the prayers of my family.

Sydney made me realize that every small child, who used to be surrounded with life’s seemingly insurmountable challenges, can go here, at a stage, and deliver a speech.

Back then, graduating from this university would still have been a fantasy.

One time, way back in the Philippines, I got asked by one of my third graders if I had a boyfriend. In front of his classmates, I was put on the spot. It was a day when I was teaching them how to write a Valentine’s Day card for someone they love. Though I was dating someone at that time, I said no. He said that it was too bad because he said that if ever I had one, he would gladly write him a card, and thank him for loving me.

Freedom to be yourself is a privilege in my country.

You often get judged and boxed and labeled and discriminated. It’s a tough world to be yourself.

But Sydney taught me that the only way we can achieve true and genuine happiness is if we accept who we are, if we become honest with our emotions if we celebrate other people’s individualities, and if we respect diversity.

Sydney was a place where I finally became myself.

And once I finally felt free, that is, when I represented the university at the Gay and Lesbian Mardi Gras, as a butterfly dressed in corsets and glitter and makeup, did I realize that my greatest enemy was my own fear.

I realized, that if only I became kinder, more accepting, and more loving to myself, can I become better – not only for myself but for other people.

To fight for rights of those who are marginalized and oppressed, we need to have stronger role models who are able to accept what they truly fight for.

Now, I am ready to go back to my country, be myself, and show my students that whether you grew up poor, or orphaned, or gay, you are valid, and accepted, and loved.

As we go back home, may we continue to realize the imagined futures of our kids – continue listening to those who belong to the other side of the fence – and continue understanding that the life we live is not only for ourselves alone but for the community and the nation.”

Field of dreams: How a ‘Makati girl’ believes her ‘farming’ degree can help feed the country

Those Who Can, Teach