‘Binondo, A Tsinoy Musical’ is both earnest and epic | Inquirer Lifestyle 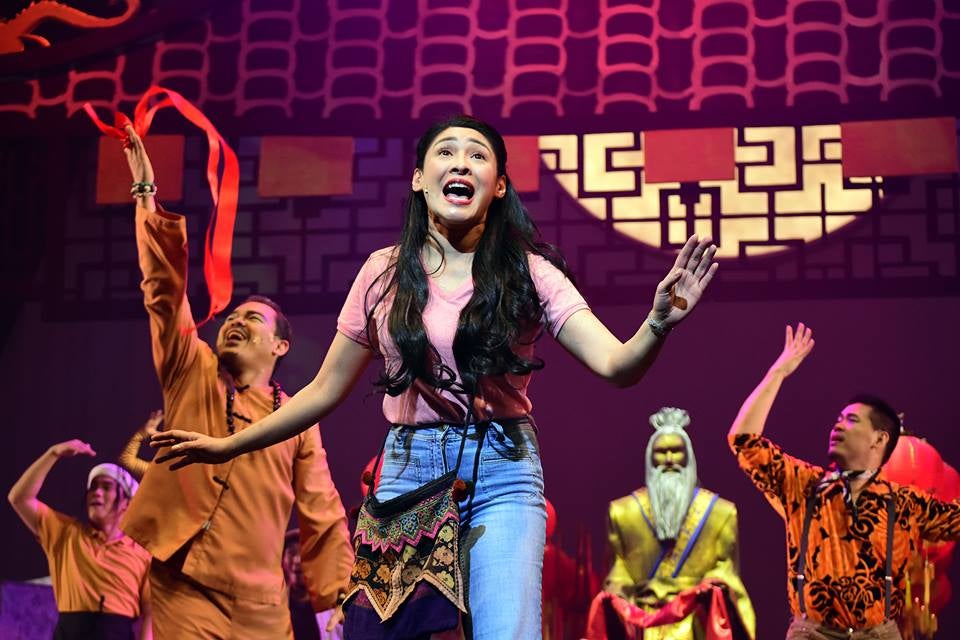 Scene from “Binondo, A Tsinoy Musical,” written by Ricky Lee, Gershom Chua and Eljay Castro Deldoc, with music by Von de Guzman, choreography by Douglas Nierras, and overall direction by Joel Lamangan. The show has remaining performances today and tomorrow at The Theatre at Solaire. —PHOTOS BY OLIVER OLIVEROS/BROADWAYWORLD.COM/PHILIPPINES

‘Binondo, A Tsinoy Musical’ is both earnest and epic

“Binondo, A Tsinoy Musical,” produced by Synergy 88 Digital and Rebecca Chuaunsu Film Productions, is a fairly accurate title that can help audiences manage their expectations upon entering the theater. It is a feel-good musical that is set in Binondo, the Filipino Chinatown, and touches on Tsinoy trials and triumphs.

At its heart is an interracial, intercultural love story that the creative team, especially musical composer and director Von de Guzman, has decided to render in an epic scale.

The notes by playwright Ricky Lee, who authored the play along with Gershom Chua and Eljay Castro Deldoc, also make clear the objectives of the musical. It wants to celebrate the Filipino-Chinese way of life and do away with stereotypes that frequently characterize the Filipino-Chinese as an Oriental villain, an unscrupulous loan shark, a penny-pinching businessman, or the perpetual victim of a kidnapping gang.

The grand opening number, a visual introduction to the Chinese god of love in his rainbow-bright temple, immediately establishes this. As emphasized by the six-person chorus who alternates as the deity’s mischievous messengers (played by Lorenz Martinez, Khalil Kaimo, Tuesday Vargas, Ellrica Laguardia, Jim Pebanco and Rhapsody Li), love defies logic, tradition and even time.

With love, then, as the fulcrum of the plot, political considerations and intercultural conflicts—the time frame spans both China’s Cultural Revolution and the Marcos martial law and beyond—can be pushed aside to serve as a mere backdrop. There is no other plot device more empathetic than a love story, after all—and, in this case, a love triangle at that.

Also, one suspects the creative team, led by director Joel Lamangan, wants the production to reach out to a mainstream audience while staying true to its cultural roots. But, in its apparent effort to appeal to a larger audience, “Binondo, A Tsinoy Musical” ends up blurring some crucial narrative lines. The presentation of the plot occasionally becomes so earnest and commonplace, teleserye-like even, that any distinctive flavor to the story, Chinese or otherwise, is lost. 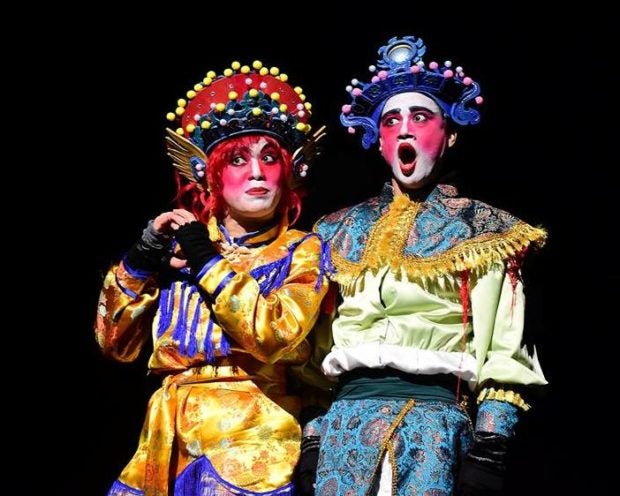 It is not because the production design skimps on the Chinese elements. Production designer and technical director Otto Hernandez pulls out all the stops to bring Chinatown to life, from the temple to the night club where the main character Lily (Carla Guevara-Laforteza, alternating with Shiela Valderrama-Martinez) sings for a living, all the way to mainland China, where the love of her life Ah Tiong (David Ezra, alternating with Arman Ferrer) is constricted by familial obligations and government repression.

With a huge ensemble cast that breaks out into song and dance at almost every scene, the location shifts expand the scale of the story into seemingly epic proportions. Sparking it with energy is Douglas Nierras’ intense choreography, performed with undisguised glee by the cast.

A lot of world-changing events were happening in the era this play is set in. Supposedly based on a true story about a Filipina nightclub singer in Binondo and a Chinese scholar from the mainland who met, fell in love, and got separated in the early 1970s, the play wants to touch a lot of bases: Chinese parents, on one hand, wanting a racially pure marriage, while, on the other, Lily’s sick but proud mother (Ima Castro) refusing to have her daughter marry a foreigner. Lily’s loyal friend and eventual husband, Chinese businessman Carlos (Noel Rayos, alternating with Floyd Tena), is made out to be a First Quarter Storm activist. And Ah Tiong becomes a casualty of Mao Zedong’s Cultural Revolution. 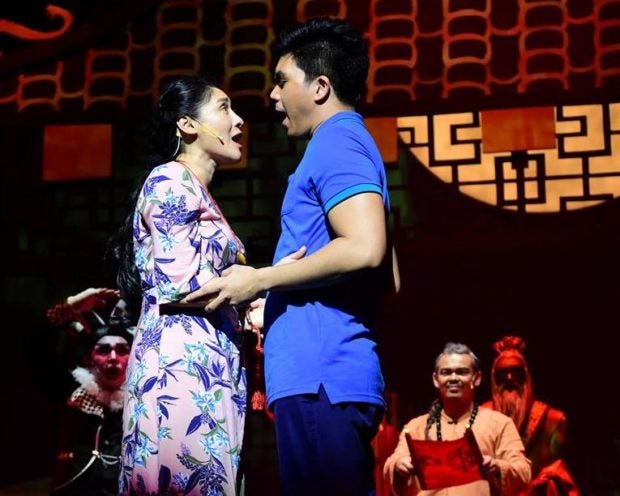 But many of these scenes appear to be given only token attention. As in vintage melodrama, the thematic omissions and leaps in logic demand to be taken for what they are—devices to complicate and move forward the central love story.

Thus, Carlos’ ultraconservative Chinese parents accept Lily on the condition that they raise her child—and the warped years of household tension that must have engendered go unremarked. Lily’s daughter, too, accepts the revelation of her complicated parentage seemingly in a snap. And, after decades of unbroken love between Lily and Ah Tiong, their preternaturally kind spouses duet on their placid acceptance of such entangled circumstances.

What makes this approach almost work is the strong cast. Laforteza makes a charming, engaging Lily. Rayos steals the show from the stoic Ezra with his solidity and subtlety. And by the sheer power of their voices, the supporting performers make their mark—especially Castro and Mariella Laurel as Jasmine, Ah Tiong’s Chinese wife.

The musical has a running time of two hours and a half. It’s meant to be an epic, after all. No doubt “Binondo, A Tsinoy Musical” is stirring, and everyone’s big-hearted work in it deserves credit. But even the soaring music and committed performances can feel a drag after a while, making one wish for a tighter, less unfocused production.