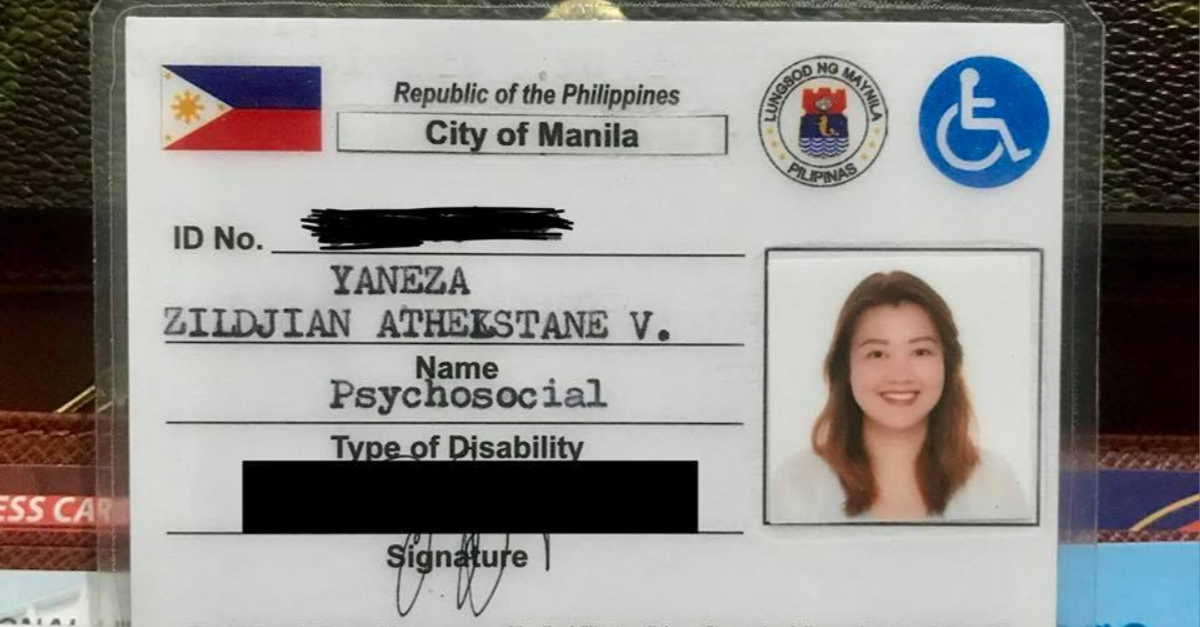 In a country where there is prevailing stigma and discrimination against mental illnesses, admitting one is suffering from a mental illness is most probably a hard pill to swallow. But after President Rodrigo Duterte signed the Mental Health Law, Psychology graduate, Zildjian Athelstane Velasco Yaneza, finally mustered the courage to share her three-year journey of accepting her mental health condition.

Yaneza recalled the first time she was diagnosed with a mental illness in December 2014: Post Traumatic Stress Disorder (PTSD). She shared her experience of bringing herself at the Out Patient Department (OPD) of the Department of Psychiatry & Behavioral Medicine in University of the Philippines-Philippine General Hospital (UP-PGH), after months of sleeplessness and restlessness, coupled with anxiety attacks.

After her diagnosis, she was given the prescription medicine she needed. However, she thought she can get by without her medication, so she refused to take them. That was when things got a little more problematic for her.

“I started self-harming: I cut my wrists, I let it bleed. Paranoia, delusion. I wanted to die. I prayed hard for Him to claim my life. My thoughts were becoming [obsessed] on the thoughts of dying; I got tired of pleasing everyone, of being not good enough, of not meeting the ‘standards.’ The crippling thoughts and anxiety overwhelmed me.”

She was once again rushed to UP-PGH in May 2015, where she stayed for ten days in the psychiatry ward. She said that she did not tell anyone about her confinement because she was afraid of the stigma associated with it. It was during that time that she was diagnosed with “Bipolar Type 1 Disorder Most Recent Episode (MRE) Manic with psychotic episode, Borderline Personality Disorder (BPD) traits and PTSD.”

“I can remember how I cried a lot because I literally had no sleep for straight 9 days while still attending class, and dealing with a lot of shit talk from some of my classmates, abusive ex-partner etc,” said Yaneza. “It took its toll on me. It’s bad when you expect from people whom you thought would understand you play the ‘ignorant’ card and say they didn’t know such a thing when all along, they are the reason for it. I understand the resistance of my loved ones from accepting what I’m currently facing, because [to be honest], I myself had a hard time dealing with it.”

Yaneza admitted that she made an attempt to end her life last month. She later realized that suicide is never the answer.

(They say I’m too fat [because of the medications] and that I’m no longer beautiful? I felt as if I am no longer deserving of being loved because I am worthless. That I am useless. That I have nothing to prove. That I am a nobody.)

Yaneza also laments over the use of the word “bipolar” as an adjective and even as a joke, as it undermines the real meaning of the word. “Mahirap piliin mabuhay kung ang nakikita mong lahat ng rason sa paligid mo eh gusto mo na lang mawala,” she said. (It’s hard making the choice to live when all you can see are reasons for you not to.)

“I always complain whenever I wake up from a trance sleep ‘cause I wish I didn’t. It’s a constant battle of living and leaving,” added.

(How can you become a doctor when you are bipolar?/You won’t get a job because you’re crazy/ You’re only benefitting from other people/ It’s your choice, anyway/ Don’t you feel pity for the people around you?)

Yaneza then shared her biggest learnings throughout her three-year struggle with mental illness acceptance: she stresses that mental health is equally as important as physical health, that having a mental illness is not a choice, and that suicide is not the answer as help is available for those who need it.

Yaneza’s awareness and acceptance of her condition reflects the growing concern of various actions of organizations in reaching out to mental health patients like her. The Youth for Mental Health Coalition Inc., for one, is inviting interested applicants to join the youth team who will draft the Implementing Rules and Regulations (IRR) of RA 11036 or the Philippine Mental Health Law. Filipino youth who are interested may join the coalition’s consultation group. JB