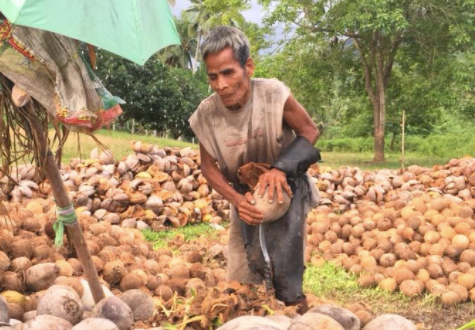 Inspiring videos of Constantino Velasquez Jr. that surfaced over the weekend pulled on the heartstrings of people the country over, as they showed Velasquez husking coconuts in out the field. The 69-year-old Velasquez is blind in both eyes and was born such. Despite his being blind, however, Velasquez moved many with his hard work, showing that anything can be done with determination.

The videos were shared on Facebook last Sunday, July 8, by a certain Yang Yang from Tagum, Davao. She wrote then, “Second day ko na to nakita si Lolo na nagbubunot ng niyog. Bulag siya since birth. I am taking the video not to get attention to everyone but to realize how God can do amazing things.”

(This is my second day to see him husking coconuts. He’s been blind since birth. I am taking the video not to get attention [from] everyone but to [make people] realize how God can do amazing things.”

Her videos showed the old Velasquez husking coconuts in a field surrounded thereof.

Yang’s post of Velasquez immediately went viral and thus far has amassed over 60,000 likes and around 140,000 shares. Meanwhile, the videos have garnered around seven million views.

Yang took to her Facebook page the following day, July 9, to give an update about Lolo Velasquez.

In her post, she showed videos of her visiting Velasquez in his little nipa hut where he lives alone. In one video, Velasquez can be seen playing the guitar barefoot while Yang and her companions watched on.

In her latest update last night, July 10, Yang addressed those who may want to extend their help to Velasquez. She wrote that instead of money, it would be apt if people gave Velasquez blankets, foam or mattress, and clothes such as jackets, a hat, shorts, t-shirts and pants.

(As for groceries, it’s okay if not too much, anyway he lives all alone in the house.) JB