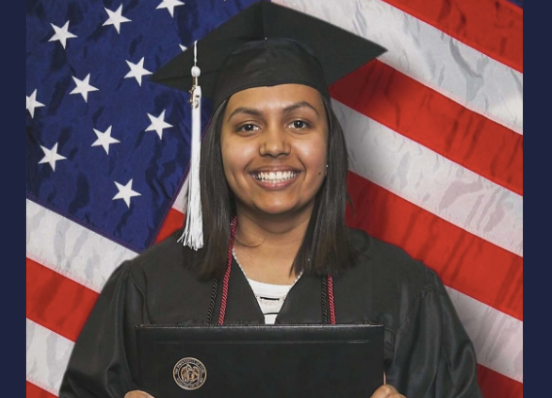 A 20-year-old software engineer from Microsoft took to social media last July 8 to share her heartbreaking story as an immigrant from Jamaica.

Sri Ponnada moved to the United States with her mother and brother when she was just 14; her mother had just started her Internal Medicine residency in New York back in 2008. Sri’s mother has since gotten a job as a physician in a small town in Iowa, where Sri and her brother attended university.

Today, she faces the risk of being deported in six months after aging out of “a broken immigration” system.

“I am going to be forced out of my home — the United States — because I aged out of a broken immigration while my mom has been waiting for years in the employment based green card system to actually receive the green card she has been approved for given her service as a physician in an underserved area in Iowa,” wrote Ponnada in a Facebook post last Sunday.

She is appealing to the public to share her story, to “raise more awareness of critical issues in our immigration system that are forcing me (and thousands of other kids) to leave the country [and/or] self-deport because there is no pathway to stay here.”

“Where are we supposed to go? This is home,” she asked.

Ponnada excelled greatly as a student and was involved in many school organizations as well as her community. Apart from writing articles for her school paper at The Daily Iowan, she was also a tutor to computer science students and a volunteer at the public library. She, too, was a news director at the University of Iowa’s radio station.

But despite all her achievements, Ponnada shared that she still struggled with anxiety and depression because she was never certain if they would get their green cards.

“I was scared about whether or not me and my family would get our green cards. My mom’s work as a doctor in an underserved community in Iowa guaranteed her a National Interest Waiver in the green card process, but the fact that she was born in India meant she still had to wait in the backlog for decades,” Ponnada said.

Ponnada also revealed that she would no longer be allowed to stay in the United States as her mother’s dependent when she turns 21 this year. Since she will now be an adult, she won’t be able to get her green card while the rest of her family does.

“Sam, my brother, is a junior at University of Iowa right now doing Math and Physics, but he’s going to lose his status in a couple of years, unless Congress does something,” Ponnada said.

Ponnada, who graduated early at 20 years old with a Bachelor’s degree in English and Computer Science, now works as a software engineer in Microsoft.

“Everything I’ve learned, I learned in America. My family is here, my friends are here, my life is here,” Ponnada said as she called on for Congress to pass the legislation. “Congress needs to pass legislation fast. Nothing exists to protect the status of kids like me and my brother, who were legally brought here by our parents. That makes no sense to me. And I hope it doesn’t make sense to you either. Please help us. We need your support.”

Many immigrants have helped shape America, from scientists to writers and inventors and designers. Steve Jobs, co-founder of Apple Inc, first stepped on United States soil when his father, Abdulfattah Jandali, came to the United States from Syria so he can pursue his studies.

Albert Einstein, considered as the father of modern physics, and arguably the greatest physicist of the 20th century, was also an immigrant. Einstein found refuge in the United States during the time when Adolf Hitler came to power in the 1930s. He became an American citizen later on. JB